If Dryden Had Been A Bruin

Share All sharing options for: If Dryden Had Been A Bruin 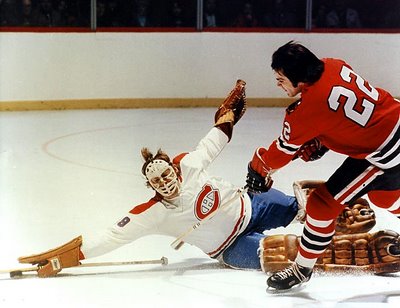 Robert L Note - I found this gem of a story courtesy of Bertrand Raymond in today's Le Journal de Montreal. Only the translation and a portion of the content are mine. Enjoy

Sam Pollock, considered a genuis in his domain as the Canadiens GM., was often recognized for his flair. If the Canadiens were able to maintain such standards of excellence under his watch, it might be because Pollock had a certain tunnel vision.

When speaking of Pollock, those attesting to his brilliance, often make mention of the robbery he committed at the hands of the California Golden Seals in 1970 that enabled him to land Guy Lafleur.

In the 1970 draft, the Seals came calling to Pollock for some help, as they were falling in the standings - and help them he did! Pollock sent a speedy forward named Ernie Hicke and the Habs first pick in the '70 draft, to the Seals in exchange for Francois Lacombe and California's first pick in 1971.

The pick turned out to be Lafleur. Had the Seals finished second to last overall, the consolation prize was marcel Dionne. Shrewd!

Another Pollock tale with a twist occured under considerably less limelight involving Ken Dryden in 1964, and this time the Bruins were the unsuspecting victims. The trading of the involved parties, seemed quite inconsequential at the moment, though It would alter both teams fate's for years.

On the day of the 1964 Amateur Draft, Pollock made a deal that ought to go down in history as the most one-sided of all time.

A total of 24 players were chosen on that draft day, divided amongst the leagues six teams. Later in the day, the Bruins traded Dryden and Alex Campbell to Montreal for Guy Allen and Paul Reid.

Dryden went on to win 6 Stanley Cups in seven and a half years of play, is in the Hockey Hall Of Fame, and has just had his jersey raised among the game's immortals.

As for the other three, not a single game in the NHL between them. 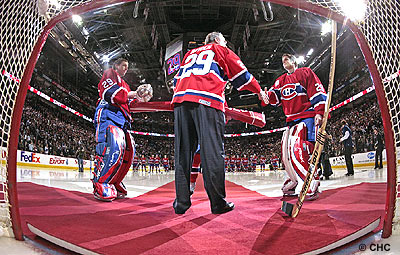 To be more precise, this draft consisted of players aged 16 or older who were not associated with an NHL club via C-Form drafting. Dryden at the time had just played one season with the Etobicoke Indians of the OHA, and was headed off to Cornell U with no thoughts of sacrificing his goals of a University degree.

The Bruins and others knew of Dryden's intentions, but the player Boston really had eyes on was Allen, taken two positions ahead, by the Canadiens.

"It was a very private draft in those days", Dryden says. "I only found out about it one week later. The funniest part is that my junior B coach informed me that I had been taken by the Canadiens. It wasn't until 1974 that I found out otherwise."

During a passing conversation with Habs scouts Claude Ruel and Ron Caron, it was mentioned to him that he had in fact been a Bruins draft pick.

"I didn't know that I'd been traded for. They kept me in the dark about this for almost 10 years."

The scouts explained to him what happened on that fateful day, and how the Bruins desperately wanted Allen.

Dryden admits that since the day he found this out, the name Guy Allen has never left his consciousness, simply because this player, unknown and mysterious, drastically affected the outcome of his entire life.

Eighteen months ago, in Ottawa, among a group of Liberal party faithful, someone in the pack asked the former number 29 if the name Guy Allen had any significance to him.


Allen played his Junior A hockey with Niagara Falls and his playing days ended there. He reurned home to Timmons and became a fireman.

A year ago, while on the Liberal campaign trail, Dryden finally met up with the man who altered his career. They had tons to talk about.

At the time, the Bruins were never close to winning the Stanley Cup. The Canadiens always had the habit of knocking them out of the playoffs should they get there. It's only logical to ask Dryden, how he feels his career would have unfolded, had he remained Bruins property.

"I don't even want to think about", laughs Dryden.

Dryden makes a point to suggest that every detail of his career went perfectly. His life has never lacked spice and excitement, and that all his hockey dreams were fulfilled simply by landing with the organization that had just set out to honour him.

"When I get asked if there were ever regrets in my career, I always say, "Hold it right there!".

"Consider that an athlete has no choice in where he begins to play, and that careers for all intents are usually on average, quite short. I had the chance to belong to the Montreal Canadiens, to play in the Forum, and live in Quebec in the 1970's!"

"Who do you know that would have regrets, had their life unfolded this way? Myself, I never regretted a single minute."

"Never mind, what would have gone down had I gone to Boston instead. I'm just happy things went the way they did."