Hurling Habs No Match For Rangers

Share All sharing options for: Hurling Habs No Match For Rangers 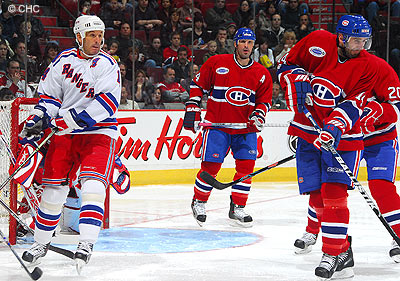 The effort was there, the desire was there, but in the end the Canadiens could not overcome the combination of emesis, untimely penalty calls and the New York Rangers powerplay.

The Habs will be happy once there is no more mentioning of yorking of any kind in the sick bay.
As you may know, several of the Canadiens have come down with a bout of the intestinal flu this past week. That would explain why they blew chunks in a puke inducing loss to the Capitals on Thursday.

Seems every NHL team goes through this once a year. Most recently, the Rangers themselves succumbed to a seven game losing streak they credited to chundering.

It's now the Habs turn to spew out some flying projectiles of their own.

The Canadiens were without captain Saku Koivu, Guillaume Latendresse, Garth Murray and Aaron Downey, who planted buckets in front of their respective T.V. sets for this one.

The Canadiens cancelled practice yesterday, and instead held a light morning skate today to prepare for this afternoons game. The light skate ordered by coach Guy Carbonneau, in light of the teams illnesses, was set up in order to determine who exactly would be ready to go in a matter of hours.

By measure of precaution the Habs had called up centers Maxim Lapierre and Mikhail Grabovski to shore up a depleted and ralphing lineup. Both youngsters turned out to be inspirations on this afternoon.

While the lines constantly changed on the day, coach Guy Carbonneau began the contest with these combinations:

During the course of the game, Higgins would take shifts at center, and Streit would return to his natural rearguard position.

The 8 dressed defenseman, were a wisely addressed caution.

In the first period, the Habs came out lame and were outshot 11-3. It didn't bode well for the remaining 40 minutes.

Surprise of surprises, goalie David Aebischer, while letting in a weak first goal, managed to keep the Canadiens in the game while the Habs were badly outplayed in the first period.

The home team came out for the second with a little more jump, but a Janne Niinimaa hooking call led to the second Rangers goal.

With the Rangers leading 2-0, it was then that I began to envision a blowout of major proportions. With a Bruins beating courtousy of the Leafs fresh on my mind, and several other high scoring routs in the NHL the past few days, I could see a pummelling in the cards for the hurling Habs.

The Habs wouldn't quit though, and began some pestulant play in the Rangers end. Fighting hard to be first on the puck, they drew a call on Michal Rozsival for tripping.

With Aebischer on the bench during the delayed penalty, the Habs pounced at the Rangers net and seemed to open the mark on Grabovski's first career goal.

The officials ruled "No goal."

They assessed that the Rangers goalie had possession of the puck before it dropped at Grabovski's feet while he knocked it in.

The replay proved once again how incompatible NHL refereeing always is. The puck only glanced off the Rangers goalie Henrik Lundqvist's glove.

There was no possession whatsoever.

That was their basis for disallowing the goal.

Coach Carbonneau loudly complained and was ignored on his demand for a review of the play.

(RC Note - Not to go off on a raging sideline tangent here, but I think it's high time the NHL passes a motion that all pucks entering the net, in any circumstance - whether it be whistled plays, delayed penalty calls, players assumed to be interfering with goaltenders, or high sticks making contact - be reviewed by the technologies set up to determine any goal that is in doubt. Take the call away from these blinded and screened zebra's, and put in in the hands of those who can see a play from all angles and perspectives. As human and errable as all officials are - shouldn't making the proper call be the ONLY goal? On Thursday, the Canadiens had an Alex Kovalev goal called off when it was determined, without review, that Saku Koivu had interferred with the goalie. On the replay, which officials never saw, it was clear that they'd made a premature judgement on the play. While their heat of the action call is human in nature, there is no excuse for the hardheadedness of not reviewing such things. These calls change the outcome of games. The goal ought to be getting it right. The NHL has no idea how many fans they lose by blowing such calls. it makes them look bush league beyond comprehension.)

The point soon became moot, as Mark Streit scored seconds into the powerplay, and suddenly the Habs were rejuvenated in effort and determination.

They continued to press and Fedor Tyutin was called for carving Kovalev a fresh facial scar.

The Habs answered with Tomas Plekanec scoring the tying goal close in.

The Bell Centre crowd was singing and chanting at this point, anticipating a Canadiens comeback. Little could they have foresen that an Andrei Markov call late in the second would lead to an early third period PP marker by Rozsival to make it 3-2.

The Habs then pourred on the attack with everything they had, trying to tie the game up.

A Jed Ortmeyer slashing call on Kovalev gave the Habs their needed opportunity.

The Habs proceeded to to cycle the puck and keep the Rangers PK totally off kilter on this powerplay. They closed tightly in on the net, attempting to get the puck back to Souray. After one failed chance, Souray took a Markov pass and slipped to the faceoff circle for a drive that was turned away by Lundqvist.

Unfortunately for the Rangers goalie, he kicked the rebound right back to Souray, who nailed the one-timer high top shelf to tie the game.

It was Souray's 11th PP marker of the season, equalling a Habs record shared by Guy Lapointe, Patrice Brisebois, and Matthieu Schneider - in only half a season, I might add.

Things were looking up for the Canadiens at this point, and they continued to ravage the in Rangers end.

Higgins was sent off for hooking on a dubious call, leading to a Rangers powerplay that the Habs snuffed out.
Regardless, it gave the Rangers momentum, and soon they would carry that momentum forth.

After a close call from the Kovalev - Grabovski - Samsonov trio, the puck was quickly turned up ice as Brendan Shanaham brought it deep into the corner. Habs defenseman Niinimaa went to Shanaham as if he was a threat to score from the corner.

The Niinimaa miscue was costly, as Shanahan fed a backpass to Cullen swooping in, and he nailed the game winner, untouched by forwards who slacked, assuming Niinimaa had the dump in covered.

Aebischer was beaten through his Swiss Cheese five hole on a shot he would surely like to have back. There's no guarantees he'd be any better the second time around!

With six minutes to go in the game, the Habs gave it all they had left, but a tight neutral zone trap set up by the Rangers kept them from penetrating the blue line.

With seconds winding down, and Aebischer pulled, the Canadiens had a final crack at a tie game with a faceoff in the Rangers end.

Off the faceoff, Kovalev pursued the puck carrier into the corner and was called for hooking - the Habs chances died then and there.

Oddly, six of the seven Canadiens infractions called by the officials were hooking calls. Most were of a debatable nature - simply raising their sticks to hip level, drew calls. Players have become increasingly adept at making such motions look as if they are being impeded. It's time NHL official clued in to that fact.

Considering that half the Canadiens played in a tossing cookies mode, today's game effort should be appreciated and applauded.

The blowout I thought was in order turned out to be a one goal game.

The Habs were surely inspired by the play of callups Maxim Lapierre and Mikhail Grabovski. While we've all seen what Lapierre brings to the team, Grabovski was a revelation. His speed, agility, and puck handling skills were no ill-founded rumour. Add him to the list of Habs prospects that are NHL ready.

Grabovski essentially scored his first NHL goal tonight, although it was disallowed. It is of no small consolation that he undid a Rangers defender, more than once, in a series if highlight reel moves.

To say he made an impression would be putting it lightly!

Lapierre, while his NHL points scoring streak was stopped, continued to deliver high intensity hockey. He skated each shift with purpose and determination, hitting hard every chance he got.

He reminds me of Mario Tremblay at his most agitating best.

Sunday afternoon, the Habs complete this weekend double header against the New Jersey Devils.
The weekend of back to back afternoon games has become a Canadiens tradition in recent years. The goal being to give the opportunity to young children to see the Canadiens play while the Christmas break is in its final days.

Hopefully these young boys and girls get a shot at watching thelikes of some future Habs stars make their initial steps in the league.

The Canadiens have yet to lose three games in a row this season. Sunday's matchup against the Devils should be an evaluation of character.