Share All sharing options for: Habs Lose - I Gotta Pay 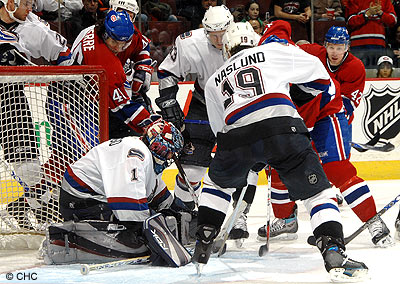 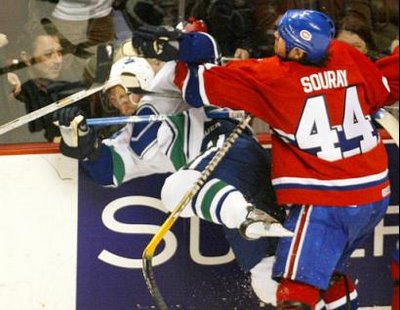 Here comes five serving of crow. I ought to make these bets with Flyers fans only.

Yup, the Habs took a 4 - 0 beating by the surging Canucks, continuing their play in disarray. Zanstorm's right about bad stretches and bad breaks. The Canadiens, while working harder tonight, I thought, cannot create their own breaks, and have no bounces going for them. The way things have been, if any shots had beaten Luongo, they'd have hit the post.

While Montreal outshot the Canucks 30 to 22, scoring chances were slim to none as vancouver coach Alain Vignault has the team playing a tight defensive style. It has evidentally been working for team. hard work and basics is where every good team begins.

It's lesson Montreal is relearning.

Carbonneau keeps shuffling the deck looking for winning line combinations and it has rendered zero goals in two games. I'm not sure what recipe he's looking for, but nothings cooking. Perhaps he's trying to make a point with certain players. Maybe he should stick it out with what worked best.

I've often seen teams flounder in this manner. It's like a confused search for identity lost. The upside is that when teams come out the other side somewhat intact, the benefits hang around quite some time. Often when analyzing teams overall depth and strength, you realize the issues are about compatibility and trust in the coaching staff and teammates.

I continue to believe the elements currently in place are strong enough to build upon. While the Canadiens presently appear to be a dysfunctional group, what worked earlier in the year was not accidental and will be drawn upon to put the team back on the right track.

Sometimes unexpected success throws teams off as much as losing streaks do. It might be no coincidence that the Canadiens season peaked right before it plummeted.

It may later be seen as a good thing it hit at the 40 game mark and not the final season stretch.