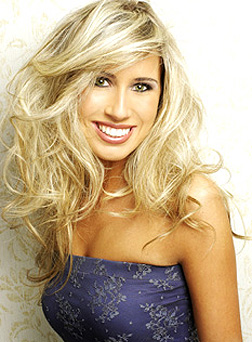 Montreal Canadiens rookie forward Guillaume Latendresse has quite a catch on his arm these days, possibly the future Miss Universe Canada, Miaka Desnoyers. The beauty has been chosen as one of Quebec's 12 finalists for the crown.

It will be the second time around for the 20 year old ReMax real estate agent, who was crowned Miss Universe Quebec one year ago.

It was thanks to that title that she met Latendresse, as both were invired guests of honour to activities surrounding Formula One Week this past summer. The Habs forward was on hand for the finalist announcements yesterday, and took his lovely friend off for a celebratory supper.

Desnoyers stated that after last years success, she was very motivated to give it another run. She received much encouragemnet and support from Latendresse.

"He knows alot about pressure and the selection process, having gone through it himself", said Desnoyers.

Latendresse, blushingly admitted that his Miss Quebec is actually his first serious love. Asked if he's encountered any jealous teases from teammates, Latendresse, laughing said he had no idea.

The two make for an interesting pair, full of ambition and goal orientated as they are. In addition to her Miss Universe quest, Desnoyers has also tried her hand at Canadian Idol and Star Academy.

"Not only do we share a great friendship, but we also learn from each other. Last year, I took time off from competitions in order to get to know myself better and gain confidence. Looking back, I feel it has paid off well", said the aspiring young woman, as she left the scene arm in arm with a very proud young man.