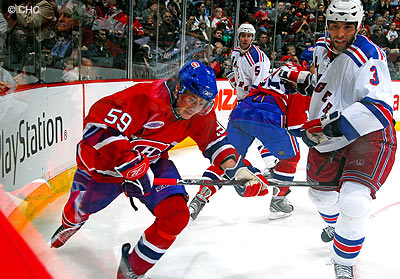 It may have taken a pesky stomach bug to make it happen, but highly touted prospect Mikhail Grabovski finally made his NHL debut.

Despite playing in his first game, Grabovski still managed to bring fans at the Bell Centre to their feet with his blazing speed. His eventful debut saw him have his apparent first NHL goal waved off because of a delayed penalty call to the Rangers. Grabovski then almost had the last laugh when he undressed Michal Rozsival and swooped in alone on Henrik Lundqvist, but he was unable to stuff the puck past the Rangers' netminder.

"He looked good to me," said Canadiens coach Guy Carbonneau, who rewarded Grabovski with almost 16 minutes of ice-time. "He’s got terrific speed and great hands. For his first NHL game he played really well. I’m sure we haven’t seen the last of him."

Grabovski’s adaptation to the North American game is going well so far. With 10 goals and 28 points in 35 games, Grabovski sits third in team scoring with the Hamilton Bulldogs under the watchful eye of head coach Don Lever.

"My coach in Hamilton took me aside and gave me a few pointers last night before I left for Montreal and that really helped," said Grabovski with some translation help from Russian journalist Genadi Boguslavski. "But I was still pretty nervous."

Butterflies aside, Grabovski had every reason to be a little apprehensive just before taking the opening face-off. The 22-year-old did, after all, suffer a serious shoulder injury during the only game he ultimately suited for during the preseason.

"I was worried about getting hurt again at first, but that all went away after a couple of shifts," admitted Grabovski, the Canadiens’ fifth round pick, 150th overall at the 2004 NHL Draft. "Playing with talented players like Kovalev and Samsonov made things a lot easier for me. I knew all I had to do was get open and they would find me and that’s exactly what they did."

Grabovski won’t have wait long to get another crack at scoring his first NHL goal, with the Devils being in town for a matinee matchup on Sunday.