Share All sharing options for: Consternation in Leaf Nation over Stanley's vanishing bands 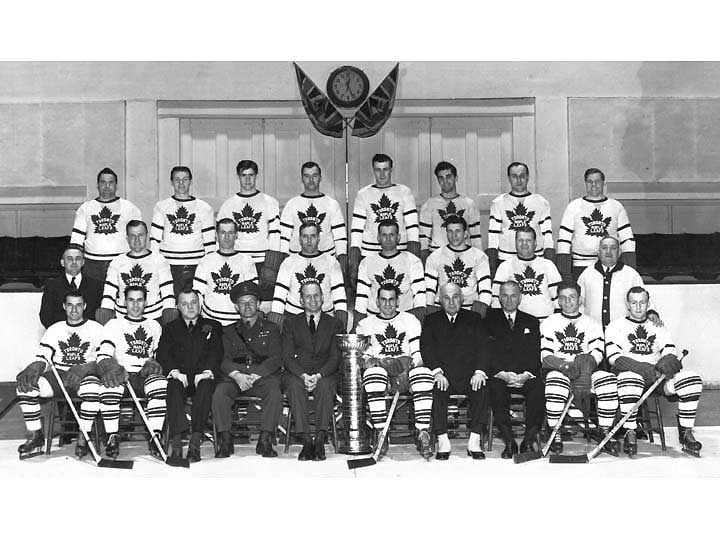 For someone interested in the history of the Stanley Cup, the best book you'll find is called Lord Stanley's Cup by Andrew Podnieks [Amazon].

Rich in factual detail, the 253-page coffee table book features hundreds of photos of the Stanley Cup and the players who've won it.

Podnieks and photographer Dave Sandford spent over two weeks shooting the trophy under different light settings to capture ever square inch of the Cup in its various incarnations. Over 2,000 photos were taken.

Along with the detailed accounts of each season's winning team, the book explores the Stanley Cup's creation from an idea by Frederick Arthur Stanley, the 16th Earle of Derby, during his five-year tenure as Canada's Governor General from 1888 to 1893.

Lord Kilcoursie responded, and read the following letter from His Excellency;

I have for some time past been thinking that it would be a good thing if there were a challenge cup which would be held from year to year by the champion hockey team in the Dominion.

There does not appear to be any such outward and visible sign of championship at present, and considering the general interest which the matches now elicit, and the importance of having the game played fairly and under rules generally recognized, I am willing to give a cup which shall be held from year to year by the winning team.

I am not quite certain that the present regulations governing the arrangement of matches gives entire satisfaction, and it would be worth considering whether they could not be arranged so that each team would play once at home and once at the place where their opponents hail from.

With this notion, Lord Stanley set forth to commission a trophy built to his precise detailing and size.

While many long believed the bowl was simply a store-bought piece of silverware, nothing could be further from the truth.

On the original bowl part of the Cup, one sees a coat of arms between the words "From Stanley of Preston" that has been the identifiable symbol of the Stanley family dating back to 1485.

This coat of arms inscribed into the Cup followed a description that Lord Stanley had given in directions to the Stanley Cup's creators. It features an in-flight eagle swooping down to steal a newborn baby from a crib; a story that goes far back into Stanley family ancestry.

In addition, Stanley had suggested in notes, that once space was filled on the Cup, new rings were to be added for additional winning teams.

To this end, more and more rings were added, giving the Cup a "stovepipe" continuation. Interestingly, during the 1930-45 stovepipe years, the rings were added above the previous years winners.

Eventually this design also reached its limits and new ideas were sought.

The modern Stanley Cup design originated in 1947, and was created by Montreal silversmith Carl Pederson. He further redesigned it a decade later in 1957 and it has remained virtually the same since.

Now, when the bottom of the five rings of the body of the Cup is filled, the top ring is taken off and installed in the Hockey Hall of Fame. All the rings are moved up, and a new ring at the bottom begins. Thus a player's name can remain on the Cup for between 50 and 65 years. The previous band was filled with 2003-04 Tampa Bay Lightning and the top ring now begins with the 1953-54 Detroit Red Wings.

Recently, in light of the facts of Stanley Cup band removal, there has been consternation in Leafs Nation regarding the possible disappearance of the engraved Toronto Maple Leafs name from the Stanley Cup should they not win another in the next 26 years. 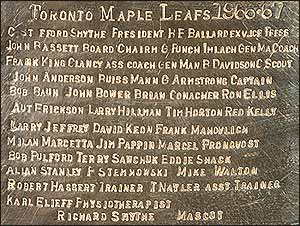 Several articles [The Globe and Mail; James Mirtle's blog] have pointed this out. Some readers of these columns are of the mindset that extra rings be added to the Stanley Cup's base. There is even a photoshopped pic of the new look Stanley Cup that is making the rounds.

The notion being that all names should be preserved on Lord Stanley's mug is a noble one, but no so easily resolved.

It remains highly unlikely that the NHL or the Hockey Hall of Fame would alter past precedent and tradition in order to suit the desires of one team's fans.

The fact must be faced, the Toronto Maple Leafs will just have to get out there and win one again.