Provost The Best Of The Forgotten

Share All sharing options for: Provost The Best Of The Forgotten

Claude Provost was a 15 year NHL'er who won a total of nine Stanley Cups.

Chances are you've never heard of him!

Provost epitomized the fiesty, relentless checker, that subtle ingredient, whose best work attracted little limelight, but was a necessity among every winning team.

There were many of his type in the games Original Six era, but few as good or as successful.

For reference sake, Provost was in the Bob Gainey mold. A tireless and fearless team player who put his offensive stats on the backburner for the betterment of team goals.

Gainey, to be more precise, was likely patterned after Provost.

Claude Provost has an odd skating style, a wide open leg stance that gave the impression he was not moving as quickly as others. Truth was, Provost was quick as a whip.

He joined the Montreal Canadiens just in time for their 5 year dynasty and was considered an integral componant of the teams success. His biggest claim to fame was his role as Chicago Blackhawks winger Bobby Hull's shadow. Hull as legend states, tore up the NHL, while never having much success when countered with Provost. 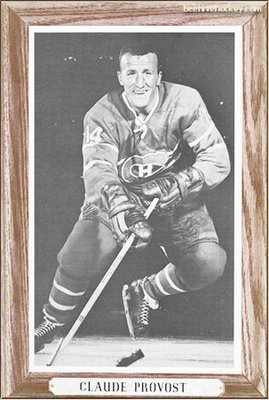 Provost was not strictly a defensive forward. In 1964-65, he was a first team All-Star while leading the Canadiens with 27 goals. Three years prior, he'd led with 33 goals. Eleven All-Star game appearances attest to his worth.

In his fifteen seasons in the league, all with the Canadiens, Provost played 1,005 games, notching 254 goals and 335 assists. He has the highest Stanley Cup win totals of any player not in the Hockey Hall Of Fame.

Nearing the end of his career, Provost became the first ever recipient of the Bill Masterton Trophy in 1968. The trophy was awarded to the player who best exemplified qualities of sportsmanship, perseverance, and dedication to the game. he was the perect initial choice.

Provost passed away, years too soon, of cancer in 1984.

He is without doubt, the most overlooked of would-be worthy Hall Of Famers.