Share All sharing options for: The Canadiens Peter Principal 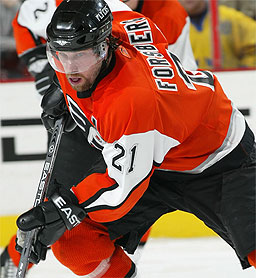 As a rule, I generally shy away from rumour talk like an outbreak of herpes.

This one, however, seems to have teeth, and it is concerning me.

It is being jumped on from all over with the zest of a Viagra gripping Hugh Hefner.

I'm speaking of the Peter Forsberg to the Canadiens talk.

I have a motto about trades that has rarely steered me wrong: If you are reading about it - it ain't gonna happen.

GM's simply do not compromise the integrity of a deal being discussed, or about to go down, by talking of it to anyone who would dare be brash and stupid enough to print it.

It just doesn't happen often and it's rarer than Pope poop.

If you scope the standing of teams, examine the contracts and their context, witness the players performance, you can pretty well figure out who's likely to be moved.

Guessing who makes no one a genius.

Guessing where to and for who in return, makes one a psychic.

No psychics of the like work in hockey circles.

That is generally how I've seen it since forever.

I state all this beforehand, because their is a rumour of Habs concern that has an unusual source speaking of it. He also seems to be advising against ir - rare as that is.

Pedneault is never one to claw into these things. He has an incredibly tight lipped reputation as one of the most well informed journalists covering hockey in North America. It is said that he is almost constantly on his cell phone, quizzing for the-about-to-happen news. He never lets a cat out of the bag as far as trades go, but knows every detail behind the deal the minute it occurs.

In short, he is extremely reliable and trustworthy from both sides of the fence.

He is not concerned about breaking stories. He is only concerned with being fully informed on what has happened the second it occurs.

Upon a trade, he will speak of how long teams have discussed players involved. He will comment that other players figured into a deal at one point without ever alluding to who they were. He'll examine and disect the deal from the differing GM's points of view, why the time came for the trade. He'll know if it involves off ice concerns or contract stalemates.

This explains why GM's are willing to slip him a detail or two. He just never leaks.

So now, I figure if Pedneault is speaking of Forsberg and Montreal for more than the first time, this isn't just smoke, it's fire!

To quote Pedneault, he had this to say today:

"In Philadelphia, there has lately been much written that Montreal is one of the teams ( 11 all told ) that are in the pursuit for Forsberg. Montreal is being being billed as an interesting destination as the organization is stockpiled with young talent, and the types of players for whom the Flyers are taking an interest in as well. Despite the fact that the Habs opponants are always better down the middle, the Canadiens can get by well enough without Forsberg. Bob Gainey and his scouting staff would be gambling big on this one."

He went on to mention that the Canadiens have been watching Forsbeg closely.

In another area of the same edition, Pedneault puts forth Forsberg's name once again, upon being asked which players would best fill the Canadiens deficiencies. he also mentions the Panthers' Gary Roberts.

So there is your smoke and fire, from the lips of one who's rarely ventured onto this limb.

I'm sure he broke no confidences in speaking of the player - Forsberg's name is being bandied about as though he is the sole savior to a dozen teams woes.

Involved in the quagmire that is aquiring Forsberg are a no trade clause needing to be waived, the remainder of a 6M dollar contract, and that fact that he cannot seem to remain healthy enough to promise a contribution worthy of dealing him.

Outwardly, Forsberg, speaking as a proud player, has spoken of staying put in Philly. Some say that this is due to self doubt that he will actually be able to help whoever pays the big price for him. In a nutshell, he doesn't want to go to a team and disapoint. Didf I mention he was a proud man?

Inwardly, he desperately wants to win another Stanley Cup. It is what players of his stripe are built for, and why he competes so ferociously when games are big. He continues to believe that, should he solve the dilema that is his left skate and foot, he can make the difference on a winning team.

Now about that particular boot. Forsberg had pre-season surgery on both ankles to alleviate discomforts built up due to extreme wear and tear. While the medical side of the ankle injuries have healed in a way that termed them successes at the time, Forsberg's right foot strength has left much to be desired. It has been determined that with a proper, more comfortable type of skate boot, his problem will be solved.

Trouble is, he has been searching high and low for a specified design that may not exist to help him.

In fact, he spent a great amount of time in Montreal earlier this season, working with a skate manufacturer, in order to find that perfect fit. It is told that he practically ran from laboratories to rented ice, trying out every prototype handed to him until he satisfied that an improvement was within his grasp.

It all reads like the resume of a future Masterton Trophy winner.

With barely a month to go before the trading deadline, Forsberg's yet to find a perfect solution to his foot foibles. Watching him play, some have suggested that he favors one side to another when having to pivot or skate backwards. It would take a big edge off his game.

In understanding all this, do the Canadiens really believe he could be worth the risk?

Even a Forsberg deemed 75% healthy may solve the Habs second line center desperation, but the Canadiens will need to unload a spare part under the cap to find room for the rest of Forsberg's mullah. Along with that, a prospect or two might need to be sacrificed to aquire him.

The Flyers surely will take no one's "has-beens" in the deal, they already have a team full of them - so forget pawning the likes of Samsonov or Niinimaa their way.

An interesting scenario does exist due to the Flyers sitting dead last in the NHL. They get first claim on all waiver wire pickups. Should the Canadiens want to deal player off - for arguments sake, David Aebischer, they simply need to send him to the minors. Calling him back up and having him claimed on waivers frees the Canadiens of half his contract dollars, thus enabling the team picking him up, in this case, the Flyers, to deal him themselves, as a 50% cheaper commodity due to that waiver loophole. The Flyers would then receive whatever they get in return, thus sweetnening the Forsberg deal to Montreal.

The Canadiens and Flyers have a history involving big names changing hands.

While Bobby Clarke is no longer the Flyer's GM in name, he is still the most highly consulted person in the organization on day to day player matters. Bob Gainey and Clarke have a longstanding friendship - it was Clarke who hired Gainey to coach the Minnesota North Stars while GM of the team in the early 90's.
Now that's alot of smoke to fan. Is there a fire?

Only Pedneault and the fly on the wall have the answer for now.