Share All sharing options for: Canadiens In Crisis Mode 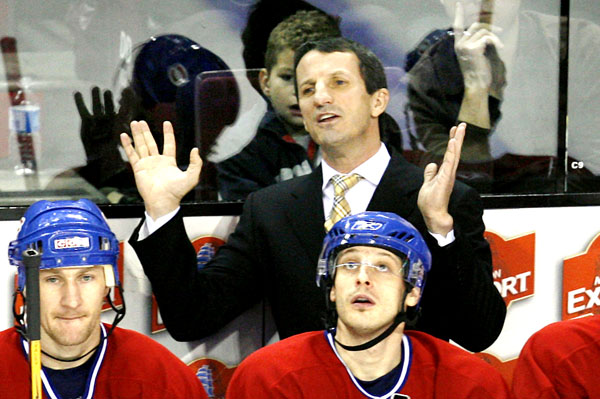 What in God's name has gone wrong with the Montreal Canadiens lately?

Watching the team tailspin in the last ten games, I wish I had the answer.

I wish Guy carbonneau had the answer!

I have been watching games over, wearing out the rewind button, hoping to pinpoint the cause of their recent lustre lacking performances, looking for that one thing needing correction to set them right.

Trouble is, it is not one particular facet that is lacking, it is a combination of undoings that are unmaking the team currently.

The list almost reads like a bunch of lame excuses mixed with poor execution and terrible timing.

What the added catastrophies sum up to, point to no easy solution.

With upcoming back to back games versus a pair of solid thriving opponants in the Red Wings and Canucks, it might be high time for coach Carbonneau to begin rattling some cages. After stressing for two weeks that it is not time for hammering the panic buttom, what has grown into team complacency must be swiftly addressed.

While there are certainly other issues to contend with, the lack of overall team confidence is shaky at best.

Without getting into much detail, here are a list of reasons contributing to another annual January slide. 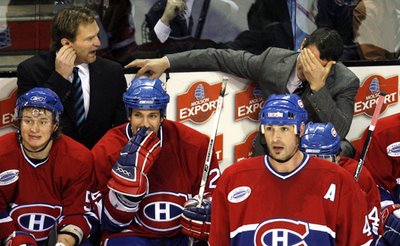 1 - They miss Radek Bonk's contribution in defensive roles. It has been taken up by a rotating commitee who aren't up to task. Plekanec, Lapierre, and Murray, are not Bonk's equal in such matters as lining up against opposing teams top lines.

2 - The goaltending hasn't been up to par. While Aebischer's play in some instances has gotten better, weak goals he's often victim of, deflate the team. Huet's not been as sharp due to the increased workload. The lack of cohesion between the forwards and D have him offguard way too often. He's been a savior in many games, but he can't accomplish it all himself.

3 - Slumping players are getting away from the basis. Coaches term this "cheating". Forwards are not coming back with the same dedication they were earlier in the year. The are hanging out too long looking for scoring opportunities where they don't exist. Teams have picked up this and are jumping all over loose pucks, pinning the Habs in their zone for longer chunks of time.

4 - Injuries and a bout with an intestinal flu virus threw the team off balance at a precarious time. When a coach shuffles 19 different line combinations during a game, it's a sure sign of fishing without worms.

5 - Still no solution for a center on the Donut Line (a hole in the middle?). Getting in sync with Kovalev is tantamount to madness. Trying Samsonov on the third or fourth line might allow him the extra puck time and space he needs to use his game. Recent minor league callups were tried out there, in what E at Theory Of Ice hilariously termed an initiation ritual. It's time to split thst duo for good!

6 - Teams have figured out the Canadiens weaker spots and are pouncing on the opportunities handed to them. The Ottawa game was a classic example of judgement errors and lapses in communication. 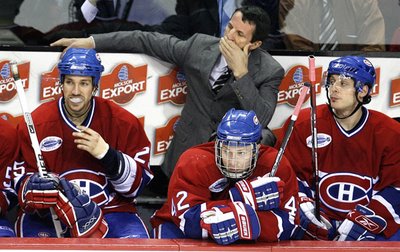 7 - The passioniate play of early December has been overtaken by doubt and complacency. Not many games of late have featured the Habs beating other teams to the puck. Often they watch and react rather than force the play by pressuring puck carriers.

8 - Chris Higgins, a big key in the kog, has yet the find his game since returning from injury. The effort is often there, but his health may be hindering his consistancy.

9 - Too many UFA contracts at seasons end may be contributing to individualism on the ice. While there are no obvious cases yet of players putting themselves ahead of the team, glimpses of selfishness on the ice in passing or shooting options are inexplicably popping up too often.

10 - Carrying 8 defenseman is reducing the amount of options at forward. While playing Mark Streit on the fourth line has at times appeared to be a success, tossing Dandeneault and Niinimaa there is just a desperation move.

11 - Carbonneau has been too fair and understanding with players who underperform. Earlier in the year, he caved in to Samsonov, during a flare up. He needs to rattle some cages at this point without backing down.

12 - Capped out in salary. The Habs need to shuffle off a body or two and create some cap room for the playoff stretch. Being almost maxed out midway through the season creates an adverse uncertainty. Complacency sets in here also. It's time to act on it.

I have to cut myself off at this dirty dozen for the good of an ill tempered and bulging forehead vein.

The Canadiens next two games should be extremely good tests for the wherewithall of the team. Should they not go well, shakeups will occur for sure.