Canada Triumphs Over U.S. In Shootout

Share All sharing options for: Canada Triumphs Over U.S. In Shootout 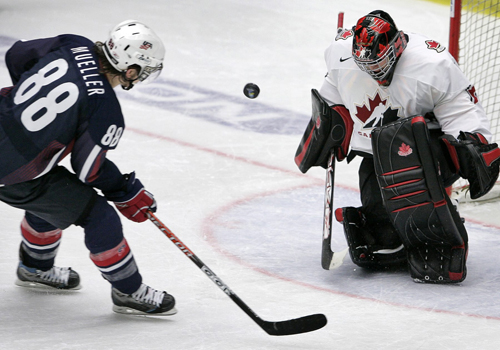 Jonathan Toews scored on a penalty shot to lift two-time defending champion Canada over the United States 2-1 in the WJC semifinals today.

The U.S. team, which beat Finland 6-3 in Tuesday's quarterfinals, dominated early but failed to score in a physical first period in which the teams combined for seven two-minute penalties.

Taylor Chorney gave the U.S. a 1-0 lead, when the puck redirected off his skate and found its way past Price, on a power play 5:04 into the second period.

But the Americans took too many penalties, and Luc Bourdon scored 12:19 minutes into the final period on Canada's ninth power-play.

Price stopped U.S. forward Peter Mueller after Toews's final goal to end the shootout 5-4 in favour of the defending champions.

Price, of the Tri-City Americans, was outstanding in overtime as he stopped all 12 shots he faced. He turned away 34 of 35 shots in regulation and overtime, while U.S. counterpart Jeff Frazee made 26 saves on 27 shots before the shootout.