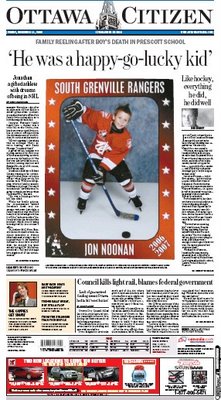 Friends and family are rallying around the devastated and grieving parents of 8 year old Jonathan Noonan one day after the younster died in an accident in the gymnasium at Prescott Central Public School.

The tragic mishap occurred when a stack of tables piled against a wall gave way and fell on Jonathan. Police and officials with the Upper Canada District School Board, pending an investigation, will not describe the circumstances surrounding the accident, though parents have confirmed that a table did fall on the youth.

The school gymnasium is also used as a lunchroom, and an unamed witness described Jonathan as simply passing by them when they gave way.

Principal Bill Loshaw timed the tragedy at 1:40 p.m. while Jonathan and his 20 classmates were gathered for physical education class. Loshaw said that "one of our staff members admistered CPR immediatly following the accident" while his parents were quickly called.

He was taken to Brockville General Hospital where he was pronounced dead.

Loshaw described Jonathan as "a hardworking, a terrific athlete with a terrific sense of humour, who certainly did his best to brighten everyone's day."

Jonathan is the son of Sandy Noonan and Chris Phillips, and has two older brothers named Joshua and Skyler.

Jonathan's aunt, Brenda Young remembered her nephew as a spirited young man who possessed a tremendous sense of fun that drew friends to him.

"Johnny was goofy, like a class clown type, always making people laugh. He was a free spirit. If you said he couldn't do something he thought he could - he'd show you he could."

His real passion was for hockey and sports and loved the outdoors.

"For a first year player, Jonathan showed excellent hockey sense. He skated like the wind - give him the puck and he was gone", said his coach, Steve Hoyland.

Hoyland said he called the parents of the 15 member team Wednesday night, cancelling all team activities, and plans a get together with parents and players to talk about what happened.

"I don't think any of us are handling it well. I still can't believe it. We were at a tournament in Westport on the weekend and Jonathan received an award."

He said "Steve, Steve, can you hang onto this? I don't wanna drop it!

"That's been on my mind ever since."

"It's such a loss", Hoyland said. Eight years old and so many years ahead of him."

"We want to make sure that all of the kids are O.K. He's part of our team, now he's gone. How do you explain that to kids?"

Jonathan's uncle Joe Noonan called him a "fun loving child who enjoyed soccer and was a natural at hockey. Whatever he did, he did it at 100 miles an hour."

Noonan said "Jonathan was an energetic Grade 3 student. His parents had given him a challenge of scoring 20 goals in his first hockey season. If he did it, he'd get a pro hockey stick."

Jonathan reached the goal last weekend, after scoring seven goals in a tournament. He played his first game with his new Sidney Crosby stick - scoring two goals - on Monday.

Jonathan loved being outdoors and was particularly fond of family camping trips to Lake Placid N.Y.

Young said it is still difficult to comprehend that the accident happened in a school.

"You think they are safe in a place like that", she said, adding "I understand that accidents happen. Hopefully we can all learn from it and prevent it from happening again. It's hard to make sense of."

She said the family has not yet seen an official report from the Ontario Provincial Police, stressing that their thoughts and energies are focussed on simply coping with the loss at the moment.

A visitation is being held this evening at the Chris Slater Funeral Home, while a funeral service is planned for Saturday morning at Seaway Christian Church in Prescott, where Jonathan participated in youth nights and took part in Christmas plays.

The Ottawa Citizen has set up a guestbook website in Jonathan's memory. You can visit it at this link and leave your thoughts.