Share All sharing options for: Tragedy Weighs On Players 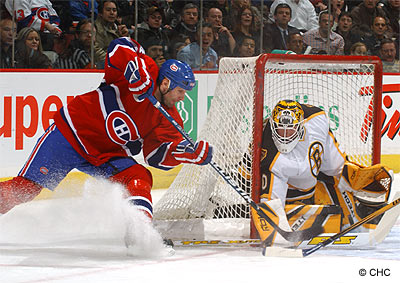 The eve of any Canadiens-Boston Bruins game is special, the battle lines being drawn in a terrific, time-honoured rivalry.

So it was special yesterday, but in a very different way.

"Hockey right now is not the first thing on our minds," captain Saku Koivu said yesterday in a dressing room painted a dull grey by the loss at sea of Laura Gainey, the general manager's 25-year-old daughter.

"When something like this happens, you think about your own kids and family. But I guess the reality - and it's something that's very brutal - is that life goes on. There are other things we have to focus on, too. We have to prepare for our game and be ready to fight for those two points."

The Canadiens (16-8-1-4) will change their game-day routine in light of the search being suspended for Laura Gainey. Usual media access to the team after the 10:30 a.m. skate, which would have been crushing today, has been cancelled with NHL approval. Only coach Guy Carbonneau will say a few words.

Almost lost in the shadows yesterday were a few news items that normally would have commanded great attention:

Defenceman Sheldon Souray did not practise, instead taking treatment on a right wrist injured in a collision with Buffalo's Paul Gaustad during Saturday's 3-2 shootout loss.

Souray awoke Sunday with discomfort, but an MRI indicated there was no break.

Carbonneau said he'd wait to see how Souray, the team's leading goal-scorer with 11 and its power-play quarterback, was responding to treatment before making a call on his availability.

"The nice thing is that we have depth on defence," said veteran workhorse blue-liner Craig Rivet. "Sheldon would be missed for sure, he brings a lot to our team.

"On the other hand, we have guys (Janne Niinimaa and Mark Streit) who've played very well and have had to sit out because of the numbers game."

Streit has played well on the Canadiens' fourth line the past few games, and said he's ready to play anywhere he's asked.

"My preparation is no different whether or not Shelly is playing," he said. "If I play D, I play D. Let's hope Shelly is ready to go, then I might play up front.

"I've gotten used to playing there, but I still have my D in my body, and after two shifts, I get the feeling back. But I'm ready to play everything."

Not practising yesterday on a so-called therapy day were defenceman Francis Bouillon and forward Steve Begin.

Bouillon was being treated for a lower-body injury - no word on whether it was related to his surgically repaired left knee that sidelined him for the first 19 games of the season - while Begin has tender ribs.

The 21-year-old native of St. Leonard has eight goals and 11 assists and is plus-8 with 49 penalty minutes in 26 games.
Red Storey, the long time journalist from the Montreal Gazette has known Bob Gainey both professionally and personally for over 30 years. Yesterday, he wrote an excellent observation on Gainey, the man, during this troubling time. It's well worth checking out.
A memorial site in honour of Laura Gainey has been set up at www.lauragainey.org/. Beautiful words and tributes or thoughts and condolences are welcome.