Three Greatest Habs Of All Time

Share All sharing options for: Three Greatest Habs Of All Time 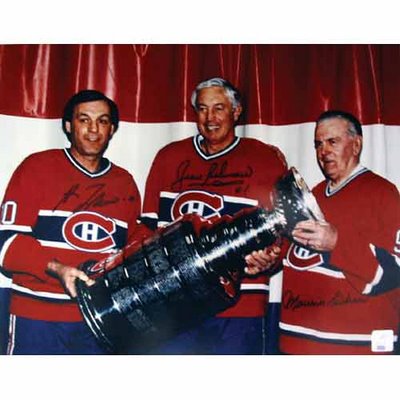 Keeping with the Eyes On The Prize credo of highlighting winners from the past, present and future, I got a whole lot nostalgic today and decided to dig up some history on some favorite Canadiens legends of mine.


Truth is, I go back and read these player bios over and over, so I figured I might as well do some kind of short blog on them for myself, as well as readers, if only to save myself time when referecing them in the future.


I have dug up so many new links that look back on the games golden ages, that I am truly spoiled for ideas to link up to on EOTP. It really does lend appreciation for today's game to reconsider past achievements by great players and teams.


It's impossible not to notice how much the game has changed through the years. One thing does remain unchanged however, and that's the pride and passion inside a given player that makes him a winner.


Along with the three quickie bios below, check some of the links to great moments in history I've added at the sidebar. There you'll find some interesting history on Bernie "Boom Boom" Geoffrion, toe rubbers thrown on the ice at the old Montreal Forum, more on the Rocket and Beliveau, and the Canadiens dynasty of 56-60 that won a record five straight Cups.

The stare was Rocket Richard's trademark. When he came at a goalie with his eyes lit up, the opposition was terrified. Glenn Hall once was quoted sharing his memories of Rocket Richard - "What I remember most about the Rocket were his eyes. When he came flying toward you with the puck on his stick, his eyes were all lit up, flashing and gleaming like a pinball machine. It was terrifying." Read more.

Mention the name Jean Beliveau, and so many images come to mind. His size, his skills, his class - he was the perfect hockey player and an even better person. He's one of the few players that seems to have transcended the game itself, particularly in his native Quebec. Read more. 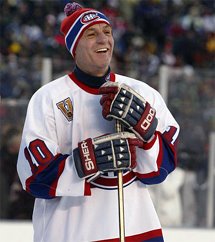 The man known as "The Flower" entered the National Hockey League in 1971 under perhaps the most intense pressure of any projected- superstar.
By 1971 the Montreal Canadiens had a long established history of French Canadian superstars. Names like Morenz, Richard and Beliveau had all set the standards, and with Beliveau retiring in 1971 Montreal was looking for a new hero to take the proverbial torch.
Enter Guy Lafleur.Read more.