Share All sharing options for: Stanley Cup Facts and Folklore

The Stanley Cup, donated by Lord Stanley of Preston in 1892, is the oldest trophy competed for in North America. It was originally known as Dominion Hockey Challange Cup and the first winners were the Montreal Amateur Athletic Association.

Unlike other team sports trophies, no new Stanley Cup is made for each new years winner. It is the only trophy that engraves the names of the winning teams players, coaches, management and staff on it.

Beginning in 1915, the Cup was contested by the winners of two Canadians professional leagues, the HNA and the PCHA. When the NHA merged into the NHL in 1917, it continued to challenge West Coast league teams for the Cup until 1926, when it became property of the NHL. The league's official ownership of the trophy began in 1947.

There are actually three Stanley Cup in existance. The first is the original bowl that is enshrined at the Hockey Hall Of Fame in Toronto. A duplicate, made by Montreal silversmith Carl Peterson, is the one most seen, as it is awarded to the champions and used in promotions. When the duplicate is not on display at the Hall, it is replaced by a third replica in the Hall while the other one travels.

Currently, in order for a player to have his name engraved on the Cup, he must have appreared in a minimum of 41 regular season games or at least one game in the Stanley Cup final. The NHL does bend this rule at times, on a case by case basis.

Steve Brule, of the 2000 New Jersey Devils championship team, appeared in only one game in the Stanley Cup final, and has his name engraved on the Cup. Brule had never appeared in a regular season game up to this point. He played in a pair, three seasons later with Colorado in 2002, and never returned to the NHL. 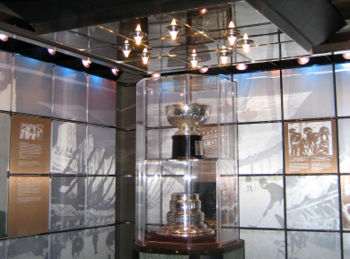 Players whose names appear the most on the Cup are Henri Richard (11), Jean Beliveau (10), and Yvan Cournoyer (10), all of the Montreal Canadiens. The Canadiens have won the most Cups, 23 in the NHL, and one more before it's formation. Seventeen other Montreal area teams are immortalized on the mug, Including the Wanderers (4), the Maroons ( 2) the Victorias (5), the Shamrocks (2), and the AAA (4).

The smallest town to ever conquer the Cup was the 1907 Kenora Thistles, population 4,000. The Thistles, led by Art Ross, defeated the Montreal Wanderers in a two game, total goals, series.

The 1896 Winnipeg Victorias started one of the oldest Cup winning traditions by drinking champagne from the bowl.

Prior to 1930, the Cup was never awarded after the game it which it was won. Beginning with the 1932 Toronto Maple Leafs, the Cup was presented on ice to the teams captain. In 1950, Ted Lindsay of Detroit, became the first captain to hoist the Cup over his head and begin a victory lap around the rink. Throught time, each player on the team would have their own lap of glory.

Two captains that broke with the hoisting tradition, did it with class. In 1998, Detroit captain Steve Yzerman handed the Cup directly to Vladimir Konstantinov, wheelchair bound, and proceeded to follow him around the ice during the first lap. Two seasons later, Colorado Avalanche captain Joe Sakic passed the Cup to 22 year veteran Raymond Bourque to hoist it first.

Many superstitions about the Cup revolve around touching the sacred mug before it has rightfully been won. While there are many tales of players who have touched it and lost, Stephane Matteau of the 1994 New York Rangers, claims that he tapped it gently with his stick before game 7 of that years Eastern Conference final. Matteau, an unlikely hero, scored that games overtime goal that pushed the Rangers to the final and eventually to Stanley Cup glory.

Another superstition involves the touching or raising of the Prince of Wales and the Clarence S. Campbell Bowl. Many have told of the jinx incuured of celebrating anything secondary to the Stanley Cup. Mario Lemieux, of the 1991 and 1992 Pittsburgh Penguins, is the last known celebrant of the Wales trophy to go on and win the Cup. Ever since, each team captain who has dared to touch a conference title trophy, has gone on to lose.

Starting in 1995, each winning player on a team was allotted one private day with the Cup, accompanied by a representative of the Hockey Hall of Fame. Prior to that date, and since, what went on with Cup holders is the story of many legends. 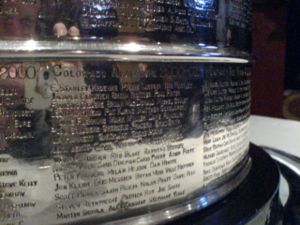 Starting in 1995, each winning player on a team was allotted one private day with the Cup, accompanied by a representative of the Hockey Hall of Fame. Prior to that date, and since, what went on with Cup holders is the story of many legends.

In the late 1970's, while the Montreal Canadiens were in the midst of four straight Cups, Hall of Famer Guy Lafleur literally stole it for himself for a day. Somehow, Lafleur managed to get the car keys to PR director Claude Mouton's vehicle. After the Cup had been placed in Mouton's car trunk, the sneaky Lafleur removed it and placed it in his. When Mouton discovered it missing, ha had no clue as to how it was lost. He alerted the Canadiens, who then called the authorities. The following day, news spread fast that Lafleur had been publically displaying the Cup on his parents front lawn in Thurso, Quebec. Seems the entire populace of the small town had their moment with it.

In 1999, Brett Hull, while shopping with Mike Modano, locked it inside his car - along with his car keys!

In the long history of the Stanley Cup, there have been many adventures and misadventures. The Cup has been around the world more than once, dropped from heights, thrown in water, and forgotten by the roadside after Cup holders fixed a flat.

Many of the names inscribed on it have been mispelled. The names of a number of women are also on the Cup. Once, a name that had no business being there in the first place, was x'd out.

In 1984, Oilers owner Peter Pocklington, included his father Basil's name, although he had absolutely no connection to the winning team.

The most awesome resource for information in every regard of the Stanley Cups history can be found through this Wikipedia link. It is a litany of every minute detail and a great link to add to your favorites for any hockey fan. You'll want to go back time and again.

Its many sections detail facts I've only scraped the surface on. They include the origins of the Cup through it's challenge years before the NHL took it over. It covers the multitude of adventures and mishaps over it's history. It details names engraved, provides many unique anecdotes, and has lots of information on Stanley Cup finals of note.

It has stories from almost every Cup win in over a hundred years and it's external links are very broadbased.

I highly recommend taking a cruise through it all. You will inevitably learn a bunch of interesting facts you never knew about the Cup.