Share All sharing options for: The Sidney Crosby Circus Comes To Montreal: Part 2 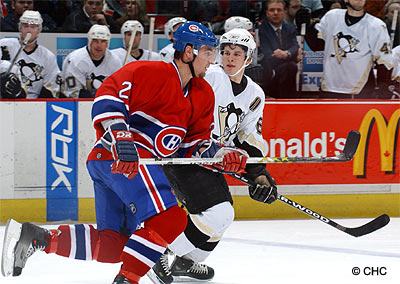 While the Montreal Canadiens have been rolling lately, internal circumstances consume their gaze.

The Canadiens seem a bonded group of late, if not so much to give GM Bob Gainey some solace of bright news in light of the terible loss of his daughter Laura. The Habs also have a bevy of nagging injuries, the return of a star player, and a handful of surprising performances jostling lineup hierarchy.
The end of the world it is not.
As questions regarding the arrival of the Crosby Show in town dominated their outer consciences, the Habs squared their attention on the inside issues.
Radek Bonk is not certain to play. He suffered a broken honker and cuts that needed seven stitches to close when he took a puck in the face in a 4-2 win over Tampa Bay on Thursday.
Bonk will wear a full visor for the team's game-day skate on Saturday morning and then a decision will be made on whether to put him in the lineup, coach Guy Carbonneau said.
Defenceman Sheldon Souray playing through a right wrist injury, didn't practise Friday but will play.
Should both Bonk and Steve Begin (badly bruised ribs) miss the game, it would take out two of the Canadiens' top checking centres for a game against the most dangerous scoring centre in the league.
"We have players capable of doing that job, so we're not worried about that," said Carbonneau. "It's the same challenge we had in our last game against Brad Richards, Vincent Lecavalier, and Martin St. Louis.

"We know their team will be ready. Sidney likes to play here in Montreal. He'll be pumped up."

Crosby's father Troy, a goaltender, was drafted 240th overall by Montreal in 1984, the same year Patrick Roy was selected 51st overall. His 19-year-old son, the NHL scoring leader, seems to play his best against the Habs.
He had three goals and three assists in four games against the Canadiens last year, including two game-winning goals, one of them in a shootout. The Penguins went 3-1-0 against Montreal.
"He's proven that he's the best player in the league right now," added Carbonneau.
Checking winger Mike Johnson who joined Montreal from Phoenix this season, has never faced Crosby but knows he will present a special challenge.

"Whoever is out against him will have their hands full," said Johnson. "He's just so explosive."

"He's quick and he makes everything happen. You won't stop him, you can just try to contain him, limit his opportunities. But in the end, he'll get his points. That's just the reality of playing against players that good."
In practice Friday, Higgins skated in Bonk's spot with Johnson and Alexander Perezhogin ,but what the lines will be in the game is not certain.
In Higgins' absence, his spot on the top line with Saku koivu and Michael Ryder was taken by rookie Guillaume Latendresse, who produced seven goals and five assists in 18 games.

Carbonneau could put Higgins back in that spot, or move him onto the second line with Alex Kovalev and Sergei Samsonov or give him reduced ice time on another line. The coach hopes to ease Higgins back with restricted playing time, but his return gives him several options.
What concerns Carbonneau most is getting a better effort than Montreal showed Thursday against Tampa Bay. The Lightning outshot Montreal 33-10 through the first two periods until the Canadiens woke up in the third to secure their third win in four games.

Carbonneau said the weight of an emotional week in which general manager Bob Gainey's daughter was swept off a ship and into the sea may have been a factor in the team's lethargy.

"You always ask why," he said. "The practices weren't that tough lately. We haven't had two games in two nights that often."

"But with all the emotion we had last week, everything that was going on about Bob's daughter, maybe it was Thursday night that it hit the players."
Whatever it was, Carbonneau wants to see his players stronger on the puck, particularly in battles along the boards, than they were against the Lightning.
Carbonneau spoke to Gainey on Friday and said he's doing fine. It is not known when the GM will be ready to return to the job.

The Penguins organization was dealt a blow on Friday when prospective buyer Jim Basillie withdrew his offer to purchase the team. Speculation has it that Basillie has major concerns that the Isle of Capri group, which has tended an offer to the city of Pittsburgh to build a casino complex that would include a new arena for the Pens, may not get the city awarded contract.

Current owner Mario Lemieux has stated repeatedly that the sale, and the fate of the Penguins franchise in Pittsburgh is indelibly linked to the Isle of Capri's obtaining of the contract. A decision on the matter is expected at long last in the middle of next week.

Basillie's move may be simple political gesturing, but it seems hardly confidence inspiring in this late stage in the process. To read more on these manoeverings, follow this