Sell It And They Will Come - Crosby Versus Ovechkin

Share All sharing options for: Sell It And They Will Come - Crosby Versus Ovechkin 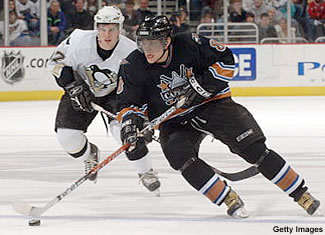 On Monday, December 11th, the Versus television network will broadcast the Sidney Crosby vs Alexander Ovechkin game. That is how this Penguins - Capitals matchup is being billed. Make that hyped! The RDS and NHL networks will also telecast the special event.

It may have been circus tent guru P.T. Barnum, or any number of freakshow barkers selling snake oil to unsuspecting suckers, who first coined the phrase, "Sell It And They Will Come!". Apparently the NHL is heeding the advice by playing up this first contest featuring the leagues two biggest stars.

As Muhammad Ali and pitcher Dizzy Dean once remarked, "It ain't bragging if you can back it up!"

Both Crosby and Ovechkin know a thing or two about backing it up. Both have been hyped. Both rarely disappoint. 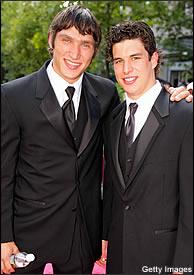 The two sophomore studs were the perfect tonic as the new NHL launched itself from the lockout season in hell in 2005-06. In the most exciting Calder Trophy race I'd ever seen, Sid the Kid, and Alexander the GR8, battled it out all year long via countless highlight reel performances. In the end the Capitals winger edged Crosby out for the award, although the jury will remain out debating which star is better for likely the next ten years.

What could possibly be better for the game?

Maybe having them appear in western conference cities more often than every three years wouldn't hurt! 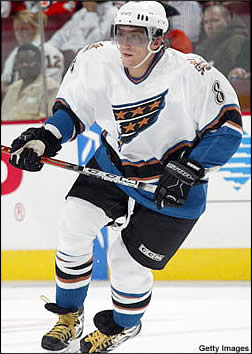 Leading up to tomorrows showcase, NHL.com is pulling out all the stops to whet the appetite of hockey fans everywhere. The top billing the game is receiving often involves the pitting of each players stats against the other. There has been much talk lately, as both players recently played their 100th career games, comparing their stats against the greatest stars in the history of the game.

Here's how they stack up so far: 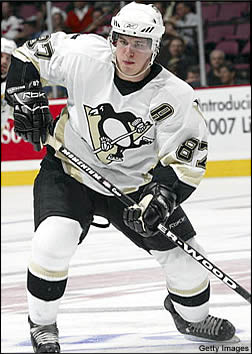 As you can see, both Crosby and Ovechkin are in lofty company - well on their way to becoming some of the game's all time greats. To think they will only get better is mind boggling!

The two players, known for their creativity on the ice admitted for the first time that theses games get their adrenaline pumping moreso than other games.

"I think it's always a little bit more motivating", said Crosby, "You know from my side I think that it's built up so much that, in a way you want to respond and make sure you have a good game. At the end of the night the win is most important. That's the way I look at it. There's no doubt there seems to be more emotion and intenssity when we playeach other."

Ovechkin, who leads the Capitals in goals and points, concurs.

Last season they met four times with the Penguins winning three of those. Crosby racked up 3 goals and 6 assists in the contests while Ovechkin countered with 3 goals and 3 assists.

Despite playing different games, Crosby being the playmaking center and Ovechkin a sharp shooting winger, they will continue to draw comparisons for the remainders of their careers. Much like Wayne Gretzky and Mario Lemieux, the debate may extend well after their respective careers are over.

For more extensive coverage on the game and it's two stars, head over to NHL.com and click on any of the dozen feature and video links to the story.