Share All sharing options for: Searching For Bobby Orr 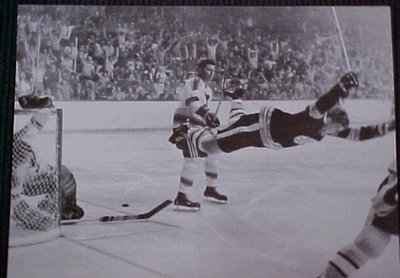 From the excellent Stephen Brunt book, "Searching For Bobby Orr", I found 'neath my Christmas tree, here are a few passages;

The althletes, not just in hockey but in all sports, were a collection of crewcut heads on bubble-gum cards, the subject of heroic profiles in the sports pages and the few specialty magazines that turned up in the drugstores. Far-fetched was the notion that an athlete could be part of the nascent 1960's counterculture. That possibility didn't dawn on anyone until Cassius Clay beat Sonny Liston and then told the world he'd rather be called Muhammad Ali. And it wasn't until the arrival of Joe Namath that a sports star possessed the kind of attractive, cutting-edge, sexy danger normally associated with movie stars or musicians. Professional athletes instead represented and reinforced the status quo, whether or not that was true, whether or not that was their choice, whether or not that was who they really were. 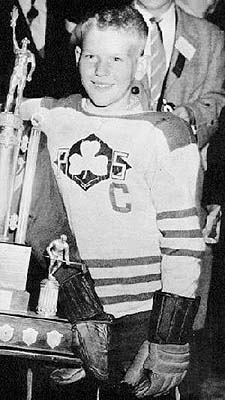 There is an image, of a kid player, who to me certainly looked like a full-grown man. Every time he stepped on the ice, which was often that day, I was told to keep an eye on number 2, playing for the visiting Oshawa Generals, a Boston Bruins farm team whose uniforms bore a variation on the spoked logo that has been reproduced by many a bored student doodling on school notebooks. So many hockey players are blessed, or cursed, to carry boys' names for their entire lives, at least those that, unlike Wayne or Mario, could be easily reduced. Howe would never become Gordon, even when he was a playing gradfather. Hull was never Robert, or even Bob. It was and is a game of Gordies and Mickeys and Dannys. And Bobbys. Orr: blond crewcut Bobby, who could take a puck behind his own net and skate through and past and around the other team. Bobby, who in the days when a young country seemed to be waking from a long nap, when a minor professional sport began to shake off the cobwebs and look to new horizons, embodied the idea that it didn't have to be like it had always been. A defenseman could take off, could improvise, could be so good that they would let him defy every bit of conventional coaching wisdom. A skinny teenager could play among hardened, violent, resentful men, and survive. A sixties guy - at least when he finally let his hair grow past his ears - could take the place of heroes who in their square upright Canadianness, looked like your buddy's dad who worked down at the plant. 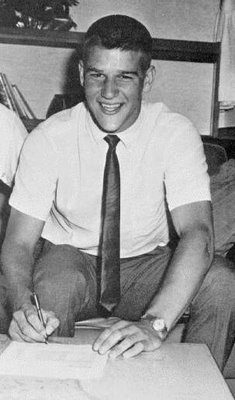 On the river, he could skate forever. No barrier but the banks and horizon, the ice stretching far out onto the bay. Soon enough, the cold seemed to disappear, even for the boy who always insisted on lacing up barefoot - it just felt better, more natural, that way. Take the puck, and try and hold it. Keep away. Offer it up, then pull it back, tuck it behind the blade, make it disappear. Sleight of hand sleight of feet. Learn to keep your head up, your eyes forward, feel the puck on your stick, don't look down. Speed up, change direction, the motion natural, deceptive, economical, graceful. No churning legs or laboured strides, even on beat up, second hand skates. He is smaller than the rest, a skinny kid, scrawny, no meat on his bones at all. But they can't get near him, even though it looks as if he isn't working hard, as if he is shifting through the gears in automatic - one speed, then another, then another. Size and muscle are of no use, without corners, without ends, without limits. There are no coaches standing by, waiting to impose their will. No parents shouting at the side. No drills, no repetition, but rather every rush is an improvisation, a jazz solo, a flight of the imagination. And when the boy is clear of them all, or alone by choice, when all he faces is open ice, the other sounds of the world disappear, the intermittent hum of small-town traffic, the rumble of distant factories, the angry shouts at home. Just the scrape and gouge of metal on ice, the rhythmic tap of rubber on wood, on and on forever. Pick a direction and keep on going, and eventually there is no one in the way. 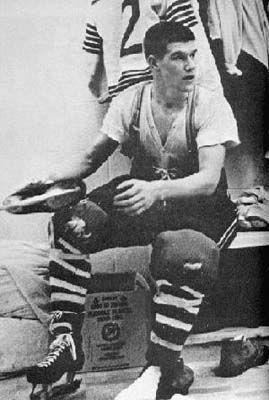 Chapter One: Parry Sound, page 12
...hockey in the Canadian hinterland...

Why people played hockey here, at least to a Canadian, is self-evident as well. This place and so many rural outpoints like it are an essential element of the great national myth, the fantasy of one nation united around a puck. The truth is, most of don't live out in the country, don't live in little towns, don't have homes within easy walking distance of a frozen river or bay or pond or slough where naturally, come winter, it's time to grab a stick and put on the skates and play the game of our ancestors. Most of us live in big cities not so distinct from big cities in the United States, in Western Europe, in Australia. Most of us would have to drive many miles on multi-lane highways through dense traffic to find a patch of natural ice (and that only if the winter was cold enough to sustain it). Many of us came from other places, far away, where hockey isn't bred to the bone. Many of us never play hockey at all. Most of us have little real experience of a place like Saskatchewan* - the shinny Holy Land (at least in English Canada), birthplace of Max Bentley and Gordie Howe and Wendel Clark - which, for all it's vast open spaces, is home to fewer than a million people, about a quarter of the population of Metropolitan Toronto.

Which is the real Canada? Well, that's not the point. The Canada of our imagination, the Canada that Canadians imagine while trying to pin down their elusive national identity, is somewhere just like Floral or Parry Sound or Brantford....

The game of hockey, for Canadians, seems organic. It emerges out of the trees and rocks and ice, out of the long winter months, the rare precious daylight, out of facing down nature, surviving and embracing whatever it can throw at us, enduring to spring. Hockey players, the best hockey players, those who go on to star in the National Hockey League - an American-based entertainment conglomerate, though Canadians can still pretend it is their own, that it isn't just another business designed to sell tickets and beer and gasoline - come from all kinds of different places: here, the United States, Europe, the former Soviet Union. But so many of them, so many of the greatest stars of the game, seem to have come from a place just like Parry Sound. They seem to have emerged from a frozen river, from a backyard rink, to have found the source of their genius somehow in the landscape. Howie Morenz, Maurice Richard, Gordie Howe and Bobby Orr and Wayne Gretzky, spun out of the elements, out of the land.

*Saskatchewan produces more hockey players on a per capita basis than any region in Canada. 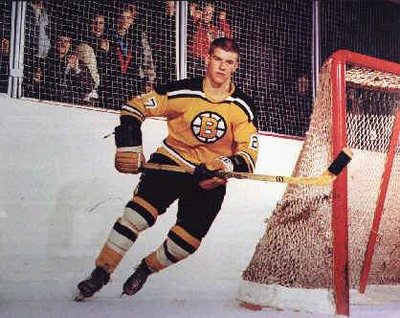 Is this not vivid enough for you? I urge anyone who truly cares about the game of hockey to go out and get themsleves a copy of this one. I may just be tempted to quote from it, from time to time.