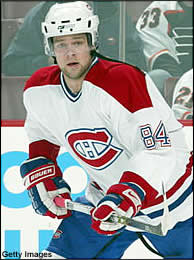 It's the kind of problem a coach loves to have.

After being sidelined since November 4 with an ankle injury, Chris Higgins is set to make his return any day now - possibly even tonight matchup versus the Tampa Bay lightening.

Coach Guy Carbonneau's dilema revolves around where to place Higgins in the lineup.

With rookie forward Guillaume Latendresse having adequately subbed for him on the top line - notching 7 goals and five assists in the 17 game span - it is being discussed that Higgins may return to his natural position at center.

Higgins, however, is just dying to get out there. His absence has felt like an eternity to him.

"I can't wait, that's for sure, these last five and a half weeks have been tough", said the winger, who got off to a blazing start with 8 goals and five assists in his first 13 games.

"I felt great great at prctice today (Wednesday), and it's been improving every day. There hasn't been any swelling and it has progressed in the last few weeks."

Carbonneau has stated that Higgins will be eased back into his usual minutes, starting with fourth line duty in his first game back. He may center the line in the prolonged absense of Steve Begin, who is nursing sore ribs and is day to day.

Once Higgins is back to form, what to do with Latendresse will become the more pressing issue.

Carbonneau has been satisfied with the efforts of the Latendresse.
The big winger leads all rookies in hits and finds himself in the top 30 of the NHL in that category, while showing consistancy while improving his play.

With lofty expectation placed on Latendresse, due to his heritage and his play - he came very close to making the team last season as an 18 year old - he hasn't disappointed. After being thrown into the first line fire, he may have found his niche on the team.

According to teammates, other than Latendresse's on ice contributions, he has done an excellent job of keeping a level head in dealing with the constant hype derived from the media.

"I think the kid has done a terrific job, doing his best to not let the pressure get to him", said defenseman Sheldon Souray. "He has come in with open eyes and ears, willing to learn and doing his best to be part of the team."

Souray is also set to return, having sat out one game with a sore wrist. The coach may use caution in the Souray decison. Seven defenseman remain healthy, and all have been dressing. Mark Streit has become somewhat of a revelation, adapting to the role of fourth line winger and pemalty killing forward with surprising ease. Janne Niinimaa would likely sit in the eventuality of Souray's return.

With the Habs most glaring weakness remains finding a more suitable second line pivot for wingers Sergei Samsonov and Alex Kovalev, Higgins just might be the tonic for the two seemingly incompatible Russians. So far the line has operated more like a Molotov cocktail certain nights.

Carbonneau has gone on record as saying the Higgins could be the solution. He stated that Higgins ought to perform as he did earlier no matter where he is placed.

The choices are many and interesting for sure.