Price gets a leg up on Sweden - WJC Update

Share All sharing options for: Price gets a leg up on Sweden - WJC Update 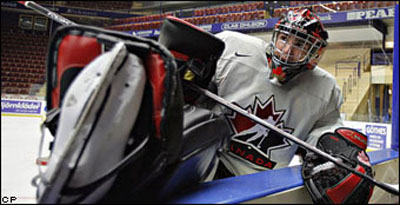 
Price extended Canada's shutout streak in the WJC to 211:50, dating back to its final round game of the 2006 showing in Vancouver.

Canada displayed a textbook roadgame, scoring first and silencing the rabid hometown crowd. They continuously won the battles along the boards while recieving quality goaltending from Price.

Canada next takes on a desperate Team U.S.A. on Wednesday in Mora at 1 p.m. EST. Teams with the best records in the A and B pools then earn byes straight to the semi-finals while runners up and third placed teams cross over to meet in the quarter finals.

Habs fans are once again priveledged to have four prospects representing their countries at this years worlds. Along with Price and Kostitsyn, who is the younger brother of Hamilton Bulldogs Andrei Kostitsyn, they also have Juraj Mikus (121st overall, 2005) of Slovakia and Pavel Valentenko (139th overall, 2006) of Russia. Price and Mikus go head to head on December 31st, while Kostitsyn and Valentenko meet up on the 29th.

For a most comprehensive update on Canada's tournament results and those of the Habs prospects, you will likely find it at HabsWorld first. Keep checking their link daily.