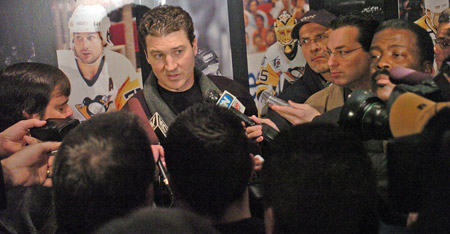 Well, he rolled the dice!

It was quite a shock yesterday across the NHL with news that The Isle Of Capri group were not tendered the downtown casino bid for the city of Pittsburgh. Team owner Mario Lemieux has lobbied long and hard for the decison as is likely taking this news as a snub of his efforts.

The Capri group's proposal included building the Penguins new arena as part of the complex to no cost for the team. It was a utopian scenario for Lemieux, who has been attempting to keep the team grounded in Pittsburgh while he has put the franchise up for sale. After two good looking potential sales offers have fallen through, the owner may be left with little recourse but to move the team. Having saved the Penguins once as the teams star player attraction, Lemieux was heroic in his battle to keep it afloat as an owner. Yesterdays's decision is hardly what his efforts deserved.

Hockey fans in Pittsburgh, to the contrary, are getting what they have given.
I refer more to those who have stayed away in droves, remaining indifferent, rather than those who have supported the team through tougher times.

Behind the city's decision may lurk a history of dashed hopes.

Lemieux first appeared in Steeltown as the 18 year old saviour who brought respectability to a team quickly becoming a joke. Along the course of 20 years and two Stanley Cups, the Penguins continued, despite on ice success, to have financial troubles linked to poor gate receipts and an ancient NHL home. The lack of a modern arena and a solid season ticket fanbase have gone hand in hand with preventing the Penguins franchise from cementing a sturdy foundation. One issue constantly affected the other.

It is quite possible that the roots of these problems lay with Lemieux's illustrious but injury plagued career.

During consecutive Cup conquests in the early 1990's, doubt as to Lemieux's continued health may have played a part in keeping fans away. Ongoing back problems and a bout with Hodgkins Disease made buying season tickets to Penguins games a risky proposition, not knowing if Lemieux would be able to participate. Constant talk of early retirement and his loudly spoken feelings about his disatisfaction with the quality of play in the league weren't exactly the PR boom a season ticket campaign wants to hear.

With his health again failing, Lemieux pulled the plug on his career in 1997 at age 32.

Although the team carried on with stars such as Jaromir Jagr and Ron Francis, the guaranteed salary owed to Lemieux, upwards of 20 millions remaining, among other things, dragged the teams fiscal future downward into bankruptcy. Adding to insult, attendance waned to the teams off ice fortunes.

Facing extinction, Lemieux rallied an ownership group together, and as a prime crediter in the bankruptcy, bought the team and gave it another life line. It was clear from the beginning that Mario's prime motivation for doing so resided in the desire to recoup the cash he'd never received in salary by selling it. As the Penguins franchise continued to free-fall, the star gave it a shot in the arm by returning to the game after sitting out three years.

For a season, his return was an unqualified success.

Motivated and rejuvenated, Lemieux seemed to pick up where he'd left off as the games premier player. The move also seemed to rejuvenate linemate Jaromir Jagr, in the midst of 4 consecutive league scoring titles. All seemed well on the horizon.

Issues surrounding Jagr's contract and unhappiness began to erode the feel good story. Clearly the Penguins would have trouble paying Jagr the numbers he felt his stature required.

Jagr was traded away for little return while Lemieux's hip problems again plagued his intentions. With rock bottom once more in sight, the Penguins began offing every on ice asset that remained in a cash scramble that sent fans running from the dreadfully performing club.

As the 2005 lockout loomed, Lemieux's season was put on life support. Penguins fans became Buddist monks - attendance was so thin.

Then, another miracle happened.

The Penguins, who finished dead last in 2004, were awarded the grand prize of the 2005 draft lottery - one Sidney "Can't Miss" Crosby.

No sooner was the lottery won, the words savior were attached to Crosby's name. Lemieux announced his career would continue, to the delight of all.

While many remained skeptical of his health, seasons tickets to the forthcoming Crosby Show were booming. Lemieux's comeback soon became a bust, but Sid the Kid was anything but. Having surrounded Crosby with a bevy of high priced, though completely incompatible, stars, the team got off to a roaring failure. Crosby , for his part, took the game by storm, setting records while just losing out on the Calder trophy for rookie of the year.

As the season in hell played out, Lemieux, retired again and busied himself with the coincidental tasks of convincing a somewhat indifferent Pittsburgh city counsil to assist in the teams getting the leagues oldest building replaced, all the while finding a buyer for the team.

With the casino decision now handed down, it appears council were unmoved by Lemieux's efforts. Perhaps they were swayed by past evidence of a non-committal Penguins fanbase and an owner more concerned with selling than owning.

My biggest question in all of this has long been, if the Pens on ice future is so bright, why wouln't Mario and his group not want to unequivocally commit to owning and nurturing it themselves?

Speaking from both sides of the mouth never inspires confidence.

Perhaps it was Lemieux's gravest error not to state that he was in it for the long haul.

The same goes for the fans who spoke loudly over the years by not showing up.

If attendance is not there, no matter how many Plan B's are enacted, it wouldn't ever matter.

Sometimes the actions of confidence speak louder than words. That is a lesson Mario Lemieux is about to learn.
Related Penguins News:
NHL Can't Take Control Of Penguins
NHL Opens Door To Relocation
Rating NHL Moves, Past, Present and Future