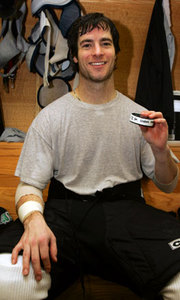 This is a pretty impressive stat, no matter what professional league a player performs in.


Chicago Wolves right winger Darren Haydar has set a new AHL record for points in consecutive games. Haydar, an Atanta Thrashers prospect, broke the record with a goal at the 13:05 mark of the first period in the Wolves 2-1 win over the San Antonio Rampage.

The record of 30 games was previously held by Mike Richards of the Binghampton Whalers in 1987.

Both the puck and stick from Haydar's goal, are now on their way to the Hockey Hall Of Fame in Toronto.

The Toronto born player spent four seasons with the University of New Hampshire, before graduating to the AHL's Milwaukee Admirals, where he has spent the previous four seasons. Prior to this year, his best AHL totals were 35-57-92 in 2004-05 with Milwaukee. Last season with Chicago he posted an impressive 19-45-64 in 32 contests.

Haydar plays on a line with center Jason Krog and left winger Brett Sterling. The trio sit one, two and three in league scoring. "It's my job to be on the scoresheet every night, but the most important thing that came out of this game was the fact that we won" , says Haydar.

Haydar surely deserves a callup to the Thrashes presently, or at the very least, once the streaks end. The diminutive forward has now made a name for himself and the Thrashers would be wise to give him an extended tryout at the NHL level.

Haydar is excatly the type of late bloomer that could now prosper in the big leagues. Considering that Buffalo Sabres star, Daniel Briere was once waived throughout the NHL by the Phoenix Coyotes, it is not inconceivable that Haydar could stick in the NHL given the proper fit of linemates.

As we recently witnessed with Maxim Lapierre's callup from the Hamilton Bulldogs to the Montreal Canadiens (3-1-4 in 4 games, +5), the gap between AHL'ers and the NHL may be more narrow than ever.