Share All sharing options for: More Legends Of Hockey

I just can't get enough of Joe Pelletier's Legends Of Hockey - what a treasure trove for hockey die hards and historians. I strongly recommend adding it to your favorites and perusing it daily. It is downright adictive!


Once I'm over the current fixation of the seemingly unlimited Habs legends, I'll come around to the likes of Orr, Howe, and others.


This time I randomly selected three players from the Canadiens history and later realized there was a small connection in regards to my hometown of Cornwall, Ontario. However minute it is, it's oddly funny in a way. 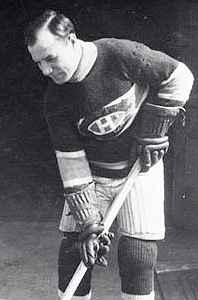 Edouard "Newsy" Lalonde, a pre NHL Canadiens great was born and raised in Cornwall. He got the nickname from a newpaper route or a job at a paper plant depending on which legend you choose to believe.


Interestingly, the Lalonde name eats up a sizeable chunk in the Cornwall phonebook. There must be thousands of Lalonde's living here. Finding ancestry would almost be impossible - but I keep asking. I must know of at least 50 Lalonde's myself - my brother was actually married to one once.


The NHL has dominated history so much since it formed in 1917 so that many fans today are often surprised to learn that the Montreal Canadiens actually pre-date the NHL itself. Many of Lalonde's greatest years came prior to the NHL's christening.With much of his pre-NHL statistics and career ignored, the Canadian sporting landscape has long forgotten one of Canada's greatest athletes.

Lalonde, who earned his nickname because he worked in a newsprint plant in his youth, was a true superstar in both hockey and lacrosse. In fact, he was probably better at lacrosse. He was so good that in 1950 he was named Canada's outstanding lacrosse player of the half century. His hockey contributions were highly recognized as well. In that same year he was elected to Hockey's Hall of Fame.

Lalonde was born on October 31, 1887. His professional career, or should we say journey, began with the Cornwall Rovers in 1905 at the age of only 16. In 1906 he became a member of the senior Woodstock club and in 1908 moved to the Toronto Arenas of the Ontario Professional Hockey League. That year he won the scoring championship with an amazing 29 goals in just 9 games and played against the Montreal Wanderers for the Stanley Cup. Toronto narrowly lost 6-4 in the championship game. Read more.

My coffee hangout of choice for over 25 years is a place called The Fifth Wheel Truckstop. I've met some pretty famous folk in there over the years as it is the kind of in-between-two-destinations type of spot where people pull off the highway to grab a bite, fuel up, or just take a pee.


I've bumped into hockey players such as Mike Bossy (Frito Lay Golf Tournament at Summer Heights), former referee Red Storey and his wife (on the way to the HHOF), and musicians Bruce Cockburn (3 times), Gowan, the Headpins, and David Sizuki.


The oddest encounter happened as I was about to leave for Ottawa one day, on my way to the KISS reunion show, in 1996. I had just got into my car, when another car pulled up next to mine, pointed in the opposite direction. Remembering that I'd forgot something inside The Wheel, I hurriedly opened my car door to go and get it. 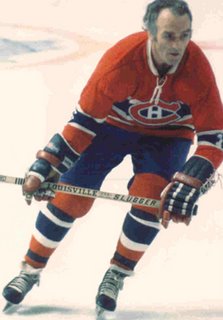 As I opened the door, the door of the car next to me also swung open. I quickly pulled it back and was ready to throw the driver a dirty look when I noticed it was none other than Henri Richard. I almost fell over laughing! I couldn't believe it!


I quickly apologized while introducing myself as a Habs fan. I just as quickly blurted out something along the lines of game 7 of the 1971 Stanley Cup Final being one of my favorite games ever. It did the trick - I had engaged the Pocket Rocket into what became a ten minute conversation.


The game in question, won the Habs the Cup, with Henri netting the second and third goals in 3-2 come from behind win.


Richard remembered that he was furious at the time at head coach Al MacNeil for sitting him in game six. He had something to prove, he said.


MacNeil is probably the only coach ever to get turfed after winning a Stanley Cup, and the Richard confrontation had much to do with it. The Habs sure didn't goof on the move - he was replaced by Scotty Bowman.


I asked Richard what he was doing in Cornwall, and he didn't even realize he was there. "Just got off the road for a pee", he said in French.


We talked a bit about the Forum, which the Canadiens would soon move out of, and he said he'd likely miss the place very badly.


I remember thinking that I hoped no one else would recognize us standing outside our car doors - I wanted as much time alone with him as I could get.


After we'd exhausted the subject of the Forum, he apologized and said he had to go.


I thought he meant to the rest room, but then he got into his car to drive off. As I went to get my stuff, he made a U-ee in the parking lot, and drove to a different spot.


When I emerged from the restaurant, there he was talking to an aquaintance of mine! I wanted to go back to him, but I was now running late. Richard gave me a wave as I passed by. Next time I saw that friend, he asked me why Henri Richard would wave to me, of all people, and why I hadn't the courtesy to stop. I b.s.'ed him for a second, saying Pocket was my uncle, before I told him of my earlier chat with him. We had a good laugh!


In hockey history, I consider Henri Richard one of the games most unique individuals.


Getting your name engraved on the Stanley Cup is every Canadian boy's dream. Very few achieve this dream. In fact, many of hockey's greatest stars never tasted champagne from Lord Stanley's mug such as Gilbert Perreault, Brad Park, or Marcel Dionne, to name just a few. Henri Richard has his named engraved on the Stanley Cup. In fact, he has his named engraved a record 11 times! Only Bill Russell of the Boston Celtics can match that claim to most professional team sport championships. Read more. 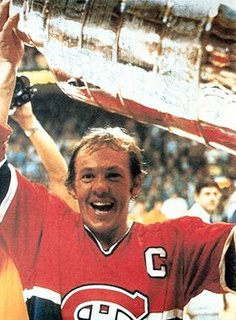 Outside of perhaps only Guy Lafleur, Yvan Cournoyer is surely the most exciting player I've seen don a Habs jersey. The Roadrunner scored the most spectacular goals at breakneck speed and celebrated them with uncomparable joy.

I met him at the same truckstop years earlier and quickly found he was as quick witted as he was fast on skates.

My routine at the coffee shop for years has been to grab a copy of Le Journal de Montreal and go over all the articles (usually 6 or 7) on the previous nights game. One morning, as I looked up from my paper, there was Cournoyer scanning the dinning room for a familiar face. That person wasn't me, but seeing on my face that I'd recognized him (what a grin I musta had!), he nodded to me in acknowledgement.

The first thing I thought of saying was "How's retirement?"

Yvan replied, "I'm only retired from hockey, real work is a lot harder!"

Before I could clue into what he meant by that, he noticed the paper I was reading and quipped, "I see your a Leafs fan!"

"Not in this lifetime", I added, before he glanced at the paper suggesting, "They should have won that game."

This little meeting of a minute or so, occurred in the mid to late 1980's, I can't exactly pinpoint the exact time in my mind. I do remember that Cournoyer said of the Habs, that they had many good younsters ready to make the jump to the team soon.

He cracked me up when he said, "All of them are not as good as me!"

He was referring to the Wheels restaurant manager. With that, he gave me a pat on the shoulder, saying "Nice talking to you", and off he went.

Later on, I'd found out that he was meeting the manager to discuss a lease option for a restaurant of his own, that he would soon open in town, called "Burger 12".

It was to be the second such franchise in what Cournoyer surely hoped would become a restaurant chain. The Cornwall location was on 9th street, and by the time I'd gotten around to checking it out, it had unfortunately shut down. At the other end of the strip mall, was a Tim Horton's, oddly enough.

The "Burger 12" chain never caught on.

For those who got to witness Yvan Cournoyer apply his trade live and in person knew they were seeing something special. One of the best skaters and stickhandlers ever to grace a sheet of ice, Cournoyer played with an affection for the game of hockey that was as obvious as it was rarely matched. Read more.