Share All sharing options for: Mr. Hockey Gordie Howe at 78 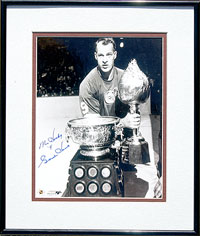 Many hockey experts have long considered Detroit Red Wings legend Gordie Howe as the greatest hockey player of all time.

While times and era's shift, Howe, long a force of nature, remains perched at the top of the games all time elite.

For those unfamiliar with Howe's history and exploits, the man quite simply has a resume rivaled only by Wayne Gretzky, the player who broke his most longstanding records.

Howe retired from the Wings, disillusioned with their direction, but hardly a finished player. He had long earned the moniker "Mr. Hockey", for his conduct and exploits within the game and off the ice. Along with disliked on ice rival Maurice "Rocket" Richard, Howe trailblazed through the game, keeping the sport alive and popular.

The game owes him a debt it could never possibly repay.

While Howe was finished with the Red Wings, he was hardly finished hockey wise. A new and rising league, the World Hockey Association, came calling to Howe with a chance to continue his career playing alongside sons Mark and Marty for the Houston Aeros.

After some trepidation, Howe got on board to play with his sons, and along with former NHL great Bobby Hull in Winnipeg, gave the surging league the appearance of credibility. While the league did manage to lure many stars from the NHL, it was always perceived as second rate. After four seasons, Houston became the New England Whalers, where Howe played three more years. Howe excelled throughout those seven seasons, scoring 174 goals and 334 assists in 419 WHA games.

When the remaining WHA franchises merged with the NHL, Howe played one final year, at age 52, with the renamed Hartford Whalers. He played in 80 games in the 1979-80 season, racking up respectable, if not astounding stats for a 52 year old man, of 15 goal and 26 assists. Howe's swan song ended here, but not before an appearance in the All-Star game, in Detroit no less. An opposite conference rival, was none other than heir apparent and long time aquaintance, Wayne Gretzky.

While Howe was prolific in every offensive aspect of the game, it was along the boards that Howe made his name. To be blunt, Howe was a punishing S.O.B., rarely letting any rival leave the rink corners unscathed. He could have almost been as easily known as Mr. Elbows. Howe's hits hurt harder than his goals scored did.

Mr. Hockey has remained a fan favorite much due to his wife and business partner Collen's efforts. Over the last two decades, the Howe Mrs. has managed the players business affairs in making his name a marketable commodity.

In the last few years, things have changed for the Detroit Red Wings great. His personal life, his health and his business life have been altered. The good news is that after some difficult times, they appear to be changing for the better.

"There were some awful times," Howe said recently from his home outside Detroit. "I always thought I was a tough S.O.B. , but I'm on these pills for my heart. You never think you're getting old ..."

He's had both knees replaced and can't move his once powerful wrists due to arthritis. Five years back, an irregular heartbeat forced a stint to be installed. He tells dozens of stories, readily admiting he often can't remember how long ago they happened. He is distressed he has trouble remembering faces and names.
The greatest challenge he faces is one that is out of his control.

His life-long love, his wife Colleen, is in the late stages of Pick's Disease - a rare brain illness that causes dementia. Colleen needs 24-hour care. Caregivers feed her, bathe her and and give her medication. She doesn't recognize anyone.

Gordie was beyond devastated. Yet with help from his family and a more active life, he's recovering.

"I've seen a big change in him over the last year," said grandson Travis, son of Mark. "When my grandmother was diagnosed, he aged overnight. He completely slowed down. Once she was diagnosed, he became a grandfather, an older guy. It really aged him.

"He didn't know how to take care of himself when it happened. For example, my granddad would go out to Taco Bell every single day to eat breakfast and dinner. He wasn't shopping for groceries. With the caregivers there, it's helpful.

"Now he's enjoying himself. He's more himself. The restrictions are gone."

Travis is working with Gordie and Mark to rebuild the business of the Howe brand, a business Colleen oversaw under the name Power Play International.

Since Colleen's illness, the Howe family has had a falling out with two individuals who worked in the company. The employees left under a cloud of controversy and bitterness that still exists.

Mark Howe has spent months rebuilding the business and, along with Travis, now handles Gordie's appearances.

"That's been my life. I try to be respectful to the game of hockey and its followers", says Howe of the hockey fans who still flock to meet him.

Meanwhile, he still struggles as he copes with Colleen's illness.

"She's not really with us, where she's coherent and speaking," Travis said. "But if you know my grandfather and you see him at home, it's a good thing she's still there. It gives him the feeling that he's still taking care of her in a way."

"I'm better. I just can't believe she went so quickly," Gordie said. "She took care of everything. I took the doctors advice. I realize this is something even the doctor's can't do anything about. The doctor said, 'If you don't relax, you're going to go with her.'

"They tell me she doesn't recognize anything but if you say something that rings a bell with her, she laughs, especially with the kids. She went awful fast, holy cow!"

Through all of this, Howe remains a class act and wants nothing more than to remain in touch with the game and the fans who continue to be interested in him.

"I remember years ago at the Olympia after the game they had rails for people to stand behind for autographs. I used to put two chocolate bars in my pocket and eat it after the game to give me a little boost because of the long lines. The staff would often open the door so cold air would come in to get rid of us because we would just stay and sign autographs."

"He's great at public speaking and meeting people," Travis said. "That's one thing that bothered me with his old business manager. Everything was strictly dollars. If he did a memorabilia signing, it was always push the next guy through the line and get them out of the way.

''My grandfather's appeal has always been that he's personable with people and he enjoys it. We went to a Red Wings game and did a signing on the concourse. He did (225) people and spent three or four minutes with each of them, almost too long. That's what people enjoy. Otherwise, you might as well order something signed off the website. What's the difference?"

Gordie, meanwhile just enjoys talking hockey. The stories come one after the other, blending together through the decades, famous names flowing like a list from a hockey encyclopedia -- Sudden Death Mel Hill, Harry Watson, Sid Abel, Ted Lindsey, and Rocket Richard.

"I went to Montreal to play the Canadiens and there were 300 people outside after the game. The police asked me if I wanted an escort 'because a lot of people think you don't like the Rocket' I told them 'I don't like him on the ice, but I like him as a man. I play golf with him," Howe said.

What about the escort?

"I told them I'd just go out with my stick. When I left the building, they just wanted my autograph."

Howe has a dog. He named it Rocket.

Howe was always underpaid, something Colleen tried to rectify. He never did make as much money as he deserved.

"I remember Jack Adams checking everyone out and asking them their weight. I lied. When he asked me, I said 208. He said, 'I want you to lose three or four pounds or it's going to cost you $200.' I was making $5,000 at the time. I came in eating ice cream a couple of days later, I thought they were going to shove it down my throat. They weighed me and I weighed 203. Adams said, 'Stay at that weight, you never looked better."

Earlier this month, the Detroit Red Wings and their owner Mike Ilitch named an entrance at Joe Louis Arena the Gordie Howe Entrance.

"I said to Mr. Ilitch 'Before I go out there, I just want to make sure that it isn't an exit.'
To visit Gordie website, click here.

For more information on Howe and his illustrious career and life, visit Joe Pelletier's "Legends Of Hockey" blog, one of the best historical hockey sites on the internet.

A feature film on Howe's return to hockey at age 44 is currently being readied. To find out more, visit this newspage.
The above article contains files from the Ottawa Sun, December 20, 2006