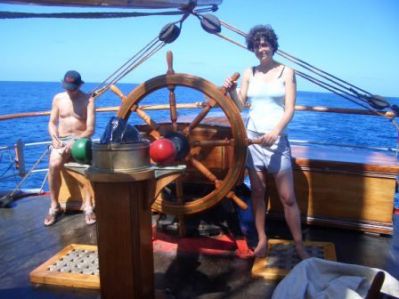 A memorial site in honour of Laura Gainey has been set up at www.lauragainey.org/. Beautiful words and tributes or thoughts and condolences are welcome.


In Laura Gainey's travels on the Picton Castle, the bubbly, enthousiastic 25 years old made several friends. Some became so close, they now consider that they have lost a sister.

Lynsey Rebbetoy was aboard the Picton when Gainey first boarded as a volunteer last March. For the next five months, they were side by side, twenty four - seven.

"She was an enthousiastic girl", said Rebbetoy, "She shared her world with everyone who encountered he and she loved to teach and learn. When there was work to be done, she was first in line. The biggest compliment you can extend to a mate was that she was a total team player."

"When I heard the news, I went completely empty", Rebbetoy said, while holding back tears. "Everyone one the boat is extremely close to one another. It's just like losing a family member. The entire crew must be floored."

Lynsey suggests that Laura grew as a person while a member of the Picton crew.

"She grew up. Just the fact of being at sea, alleviates all the distractions of life. One tends to get to know oneself better.

Ms. Rebbetoy says that Laura fell in love with the ocean.

"She just loved being aboard the boat and seeing the ocean", she said smilling, "it was a big part of her life". 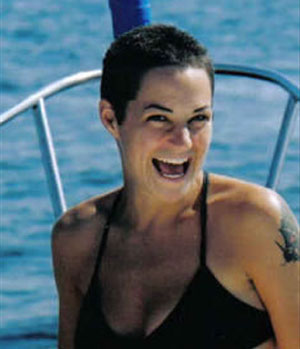 In New Germany, 50 kilometres from Lunenberg, Mikay la Joudray was missing Laura tremendously.The girl of 12 had helped prepare the vessell for it's departure on this journey and had made friends with Gainey. Mikay had knitted her a scarf "because it's cold on the seas."

Laura had left her a note saying thanks "to a future captain."
Laurence Mawhinney, Mayor of the community of Lunenberg, a town of 2,000 inhabitants that serves as the launcing port for the Picton likened Laura gainey to her father.

"It was June 17th, the last time the Picton was in the port", he recalled the Mayor. "I remember her getting off the boat to come meet her father, who was with Mike McPhee and Murray Wilson."

"From what I could tell, she was a very vibrant young woman, courageous and determined as her father was when I watched him play in the Forum."

Mawhinney estimated that the entire small town has been devastated by Laura's disappearance.

"The townsfolk all get tied into this and it brings up memories", he stated while pointing to a monument of the 660 names of persons lost at sea in the past 100 years. "I can't begin to even imagine how this tears at the Gainey family."

"Laura always imagined her destiny was aboard a sailboat", said friend Jennifer Stuart.

"It was her dream to get on the big boats and it was all she would ever talk about", she added, her voice breaking.


While living in British Columbia where she attended Malaspina University College, she was never far removed from her lust for boating.

"She lived on an island just off the coast of Vancouver", remembered Eliza Gardner, a former drama teacher of Laura's."She was on the water daily coming in."

After her mother's death, she had a rough spell and fell into drug dependancy, but she worked to overcome it and was choosing the right paths in life.

"Laura touched everyone she met", said Stuart, "She'd do anything to help out anybody."

Randy Bynam spent three months with Laura and four others students setting up a tourism program in small town in Costa Rica in the summer of 2005.

"She was an incredible girl, kind and passionate", said Bynam "We'd spend lots of time talking about sailing. It was her goal to be a ship captain one day."