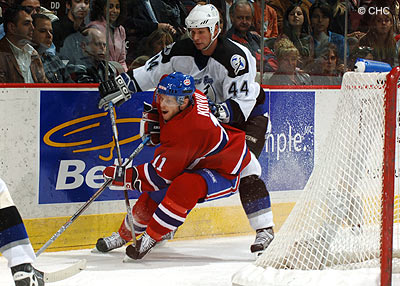 Led by a pair of third period goals by captain Saku Koivu, The Canadiens pulled off a third period comeback and yanked a victory from the jaws of defeat, beating the Lightening 4-2.

The Tampa trio of Martin St.Louis, Vincent Lecavalier and Brad Richards alone totalled 16 shots on net, and were allowed to freewheel on a half dozen powerplay chances. The Lightening, who have only won one of their last six games, played desperate hockey, outshooting Montreal 43-20 in the game.

The Canadiens win and third period rising is all the more impressive considering the obstacles they needed to overcome. Character in hockey, could be described as finding ways to win when everything seems to be pointing towards a loss.

With the injured Chris Higgins yet to return, and grinder Steve Begin still healing sore ribs, the Canadiens line combinations were juggled all evening - an evening that saw them kill off five of six penalties. These included 3 straight calls in a seven minute span of the second period, after which the Lightening were outshooting the Canadiens 33-10. 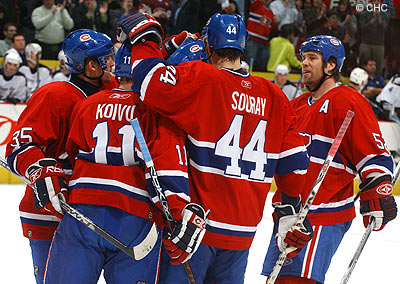 More line combo's were rolled out in the third after Radek Bonk left the game after taking a puck near the eye.Guillaume Latendresse was given spot duty after being hit twice by Sheldon Souray blasts in front of the net.

Souray returned after missing a game with a bruised wrist. He did not look uncomfortable and had three assists on the night.


Chalk the win up to special teams, depth, and solid goaltending.

The Canadiens tallied twice while down a man. The opened the score shorthanded on Mark Streit's first of the season. Koivu's first goal, the eventual game winner, came shorthanded as well. 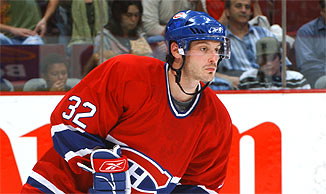 Streit, normally the club's seventh defenseman, has played too well in recent weeks to be sitting out after the return of Francis Bouillon and Mathieu Dandeneault from injuries. He has been giving the role of fourth line left wing and has responded so well that it has become in permanent residency in the last string of games. He is also adding minutes with some powerplay duty on the second unit as well as penalty killing while at forward.

Who knew the Swiss Olympic team captain would turn out to be a jack of all trades? 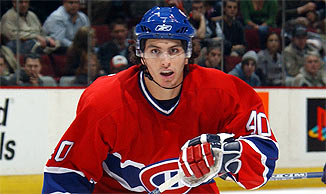 Hamilton callup Maxim Lapierre continues to make a name for himself. In just two games since joining the team, he has earned coach Guy Carbonneau's confidence and has played in all extreme situations. Lapierre hasn't been skipped a shift, and his high intensity crash and bang game is quickly making him a fan favorite.

While killing a penalty late in the second, Lapierre received quite an ovation from the Bell center fans as he outdueled three Lightening players along the boards while eating up twenty seconds of clock time. He was duly rewarded in the final frame, notching the game tying goal on a deflection in front of the net.

Lapierre was again shown confidence by Carbonneau. With a minute to play, and the Canadiens hanging on to a one goal lead, he was out blocking shots and giving his all to remain with the team.

Goaltender Cristobal Huet needed to be quite the acrobat this evening, fending off the likes of Tampa's sharpshooters. Several times he foiled close in chances, as Tampa had Montreal playing on their heels.

Koivu's empty netter, with the Lightening buzzing the Habs net in the final seconds, sealed the win.