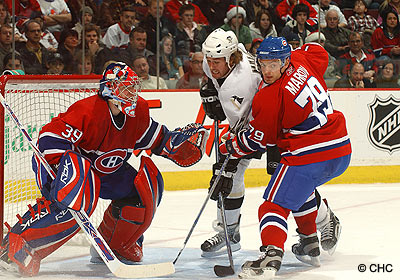 The atmosphere in the Bell Centre was buzzing with anticipation as the usual full house crowd of 21,273 gathered for the first visit of Sidney Crosby and the red hot Penguins.

Instead of the Crosby show, they were treated to the exploits of Saku Koivu and an unleashed Habs power play.

Koivu popped in two in the second period, his fourth two goal game of the month, while the Habs scored twice more to come from behind once again.

For a second consecutive game, the Canadiens opened with a brutal first period in which they were outshot 17-3.

After Evgeni Malkin got it going for the Pens on the PP, Montreal tied it up with a Michael Ryder slingshot zinger from the left circle. The puck was in and out so fast that the play necessitated a quick review. Just as nice was the backhand cross ice feed from Guillaume Latendresse that fooled both defenceman as well as freezing Pittsburgh goalie Marc Andre (Gilles Bernie Antoine Sebastien Sylvain Paul Emile - pick one name, God damnit!) Fleury.

It didn't help their cause that they took five first period penalties. Thankfully, when they are off, Cristobal Huet is sharp, keeping them from being burried early.
Crosby got his only point on the night, an assist on Alain Nasreddine's first NHL goal in 31 career games. The one-time Habs defenseman celebrated the goal in a spastic joyous fit. Imagine Joey Moss winning the Super Seven! The goal was scored on a delayed penalty call with two-tenths of a second left in the first.

The Habs dressing room must be the sight of some between period voodoo lately - the Canadiens came out a different team in the middle frame, outshooting the Penguins by a 23-6 margin. Domination of this extreme usually comes with a whip and a leather mask!

They got down and dirty in the offensive zone, forcing a tired Penguins squad who'd played 4 games in 6 nights, to start taking liberties with Habs players. It didn't take long to catch up to them.

The Habs powerplay, ranked third in the league, made a quick feast of the flightless birds young defense. The 2nd played out quite similar to the Tampa 3rd, two nights earlier. This scenario is achieving almost ritual status with the Canadiens - it's like it is part of a game plan! If it was, the plan worked to perfection as Pittsburgh took more penalties than their seemingly tired team could defend.


First Kovalev burried a blistering shot from a narrow angle, fed with poetic beauty by the oh so underrated Andrei Markov, to tie the game. Koivu then notched his first of the game to put the Habs ahead, and send Pittsburgh spiralling.

With less than 5 to go in the period, the Penguins came unglued, taking three penalties in a 25 second span. At 15:25, two calls on the same play led to a goal on the delayed call. While Nasreddine was serving the second of those calls, Sheldon Souray blasted home another PP goal in his typical fashion. Sergei Gonchar, the goat of the Kovalev goal, was sent off a second time in the period, and Koivu responded by redirecting another smart feed from Markov, who ended the period with three assists.

The third period was quite boring to be honest, as the Canadiens simply clamped down on the Penguins to assure the win. The surprising Maxin Lapierre potted an empty netter to seal the win.

Lapierre centered the fourth line which refound Latendresse midway through the game, and super utility man Mark Streit. Once Steve Begin returns from injury, the Canadiens will likely demote either Aaron Downey or Garth Murray to Hamilton in order to make room for Lapierre, who has brought more to the team in three games than they have combined all season.

Imagine a fourth line made up of Begin - Latendresse - Lapierre, not too shabby indeed!

Pittsburgh still held a 34-33 shot advantage at the end of the game.

Crosby, was checked relentlessly by the Montreal line of Radek Bonk, Mike Johnson and Alexander Perezhogin, had a relatively quiet game with only the one assist.

The 19-year-old league scoring leader had 10 points in his previous two games. Crosby also saw his run of six games in a row with a goal stopped.

'That line was a big reason why Crosby didn't have a big night," said coach Carbonneau.