The internet hockey community has recently proven itself to be quite a united and powerful group in regards to the Rory Fitzpatrick story.

The "Vote For Rory" story, an internet quest to send an NHL "everyman" to the league's All-Star game has gained a surprising amount of media coverage and momentum. While I have previously chosen to remove myself and my site from the moral equation of the campaign, I must admit to being impressed by the dedication of hockey fans, and bloggers alike.

Bandwagon jumpers, caught in the coolness of the ruse, likely never positioned themselves inside Fitzpatrick's skates or conscience.

My unstated point of view on the whole deal, has always concerned the player and person first and foremost.

To finally speak my mind on the matter, Rory, under any given circumstance, would never feel comfortable in heading to Dallas, in the midst of controversy. While the player initially seemed to momentarily relish the attention, he soon understood the consequences of jokingly endorsing such a lark.

He has since backed off, hoping that internet hockey fans do so also.

In truth, Fitzpatrick never represented the hyped "everyman", but merely a fringe NHL'er hanging onto his job. The "everyman" has a firmer, less teetering grasp on a longer term career.

Having said all that, and not wanting to seem as though I am a pisspot spoilsport, the power in numbers shown by fans of the game is what has impressed me most about the Rory infatuation. It is not a shaking of the foundations aspect that has grabbed my curiosity and attention, but the sheer will to do something positive with a clout we, as internet hockey fans and bloggers, could well earn if put to proper use.

Affecting positive change, is what I am getting at.

NHL commissioner Gary Bettman has often mentioned that he is aware of NHL fans online. We are also becoming more aware of our voice as fans within the league. While we online fans may never be querried on matters of league rules or divisional alignment, we can make make ourselves important in other progressive ways.

It all begins with doing something positive and right.

It requires our involvement in a "feel good" story that would have little to no controversy attached to it. 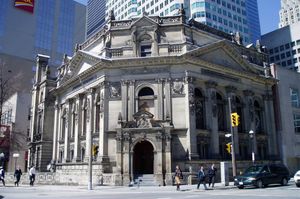 It requires our involvement in a "feel good" story that would have little to no controversy attached to it.

Through the hockey media itself, I've latched on to two stories in the past year that could well gain some support, amongst ourselves and the said print media, who would undoubtably become our ally.

In a sense it is not all that different than voting for an NHL "everyman".

The Hockey Hall Of Fame is an institution we are all familiar with. It has a due voting process only slightly less immediate than that of the NHL All-Star game.

There are two cases of omission into the Hockey Hall that have long irked me - one, if you have a reporters heart, could seem closer to you than you think.

As a writer of 44 years of age, I sincerely hope that the people who I will be suggesting for inclusion to the HHOF are not beyond your realm of game love and understanding. The greatness of who they are and were, should never escape those who share the opinion that how the game treats it's past, affects it's future.

I say, we all get together, to make these cases our feel good stories!

Trust me, both are more than worthy.

While both scenario's differ, I will tackle the Fisher case first.

Fisher has been covering the Montreal Canadiens for 49 years. He has been writing on hockey even longer.

His dignity and professionalism are second to none. He has long been revered by not only readers, but also by the players he has covered. Respected individuals in hockey such as Bob Gainey and Ken Dryden have given testament to his accomplishments.

You would tend to assume that he deserves induction into the Hockey Hall Of Fame as a writer, and hence as a promoter of this great game of hockey that we all are fortunate enough to be commenting on daily.

In regards to writting about the game and it's players, Fisher is our eldest of professional ancestors. A man of no small compromise, he is the purest of our breed.

The most cutting of slights, the most blatant, absent-minded of diminishments, has been committed against Fisher.

Red Fisher, you see, was inducted into the Hockey Hall Of Fame in 1985, as he rightly should have been.

He received the Elmer Ferguson Memorial Award for excellence in hockey journalism.

He didn't steal it.

He put in more hours than the average NHL'er on job and did it all in the good name of the game of hockey. He wrote about players, while understanding they were human beings. He wrote about teams, while understanding winning team concepts. He respected what was personal and priveledged information while never compromising his position, enabling us hockey fans to get great insight into the game we love.

If he's still on the beat 50 years later, what else do I need say?

Hockey owes Red Fisher more than it owes him.

In the late 1990's, the Hockey Hall decided for no positive reason that all media personnel inducted in the Hall be referred to as "Honourees" rather than members. Fisher proudly pulled his name from the Hall in protest, feeling the slight. In his profession, Fisher had built up the game and promoted it to the best of his ability. No "honour", as so termed, ought to diminish what the man accomlished. He ought to be re-inducted, as he initially was, as a full fledged "member" of the Hockey Hall Of Fame.

Need there be reminding that Red is like quite a lot of us. He remains and always has been a non-compromising seeker of truth, deliverer of news, and a hockey fanatic at heart.

You'll agree with me when I say he deserves a more honest fate in regards to the HHOF.

Before the NHL even begins to suggest one more time, how important media is to the game's interest spreading continent wide, it ought to correct the wrong committed, not only in Fisher's name, but in all former, present, and future media inducteed of the game.

Red Fisher, is you and I, writing of hockey everyday.

Rogatien Vachon is on the opposite side of the paper and pen.
A career hockey man, Rogie was one of the NHL's premier goaltenders of the 1970's. His stats from the era show he may have only been surpassed by the likes of Dryden, Tony Esposito, Bernie Parent, and Gerry Cheevers in terms of career acomplishments and career numbers.

Not only did Vachon ply his trade mainly on hockey's west coast, in that gold and purple Kings jersey, he thrived at it. Vachon, along with Marcel Dionne, very consistantly displayed excellence throughout their careers. Had it not been for them, Wayne Gretzky may not have had a franchise to bolster upon his trade to Los Angeles in 1988.

There are three current franchises in the state of California the NHL can be thankful for - the Kings, the Sharks and the Ducks. Vachon spent the better part of a decade there stopping pucks where the sun burns peel more skin than the red lights of goal judges do, yet he has never been given the game's supreme acknowledgement.

Vachon was on the smaller side of goalies, standing only 5' 7' and 170lbs. Despite his stature, he parlayed his stand up style successfully, playing over 200 games with the Montreal Canadiens between 1966 and 1972.
With them, he won 3 Stanley Cups in 4 seasons, including winning the Vezina Trophy.

In 16 NHL seasons, Vachon compiled 355 wins and a more than respectable for the era, 2.99 GAA. Rogie went on to play two seasons each with the Boston Bruins and Detroit Red Wings before retiring in 1982.

In the 1976 Canada Cup tournament, Vachon's goaltending was key to the country's win. Rogie's excellent performances were again overshadowed by the games greats. With Bobby Orr's last hurrah earning him tournament MVP honours and Darryl Sittler's winning goal against Czechoslovachia, little spotlight was left over for Rogie the goalie.
In his post player career, he has served the L.A. Kings in many capacties, including General Manager.

If one was to compare the career stats of Rogatien Vachon against other HHOF inductees such as Bob Pulford, Dick Duff, or Bernie Federko, it would be plain and obvious to see that this goalie has a home in this temple of greats.

Are you ready to do something about it?

If we can come so close to flying Rory Fitzpatrick to an All-Star game, we could surely add our influence to the cases for Fisher and Vachon.

After that, who knows what we could accomplish together!