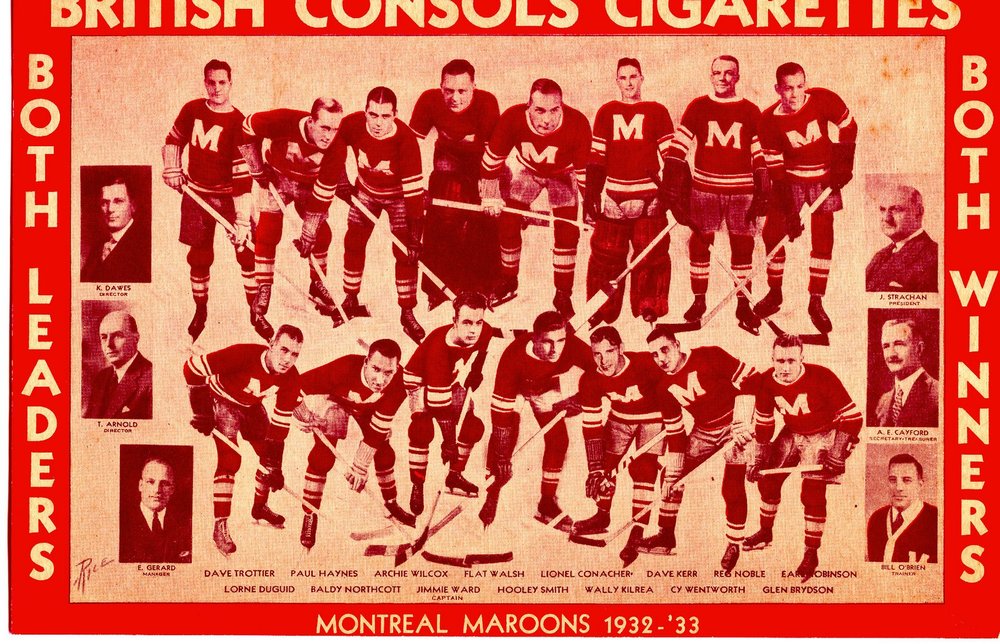 Today I discovered, thanks to a friend's push, one of the most amazing hockey sites I've ever had the pleasure of getting lost in. This beautiful site, a tribute to hockey lore, can be found at hockeymemorabilia.com.

It is loaded with pictures and assorted memorabilia from days gone by. Most of it covers the era from the early 1900s up to the mid-1940s. It's a treasure trove of autographed pictures, team photos, old game programs, hockey postcards, player contracts, and miscellaneous stories from hockey's formative years.

It spans the age before the NHL was a six-team league and includes memorabilia from players who toiled in the NHL's many feeder leagues. Most scans of pictures are amazingly clear and readable.

From time to time, Eyes on The Prize will delve back into those foregone days of leather boot skates and painted gloves, to highlight yesteryear's forgotten heroes and builders of the game.

Along with the permanent link added to the sidebar section, I will be posting photos in reverse chronological order in the sidebar down past all the Stanley Cup champions mixed in with the winners of that era. There you'll find some cool shots of when the Red Wings were the Detroit Cougars, the final years of the New York Americans, a few Ottawa Silver Seven pieces, and various photographs of the likes of Eddie Shore, George Hainsworth and Jack Granger. Keep checking it out from time to time — there's no end to what I will be adding to it.

For starters, I'll get things going with this shot of the 1939-40 New York Rangers. 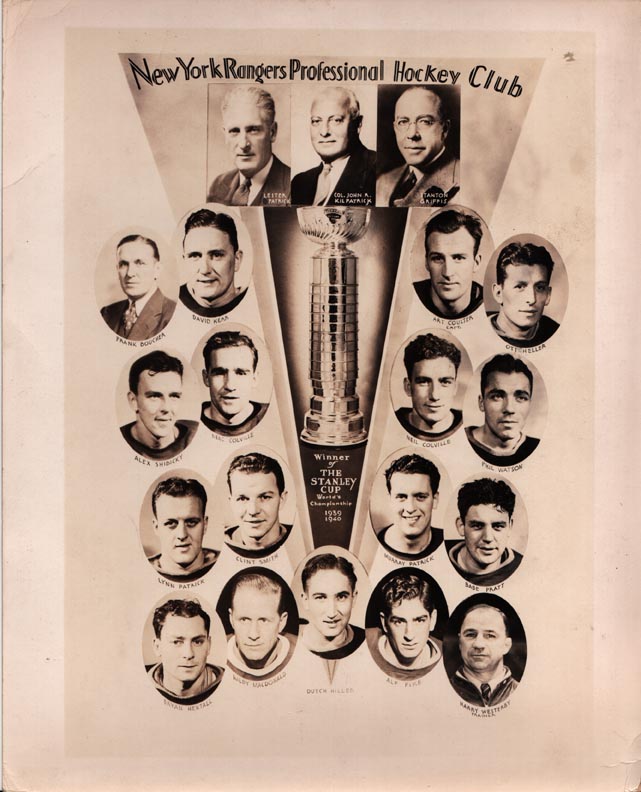 The 1939-40 Stanley Cup Final was an odd one. It was only the second ever seven-game Final as the NHL had changed the format from a best-of-five two years prior. It was even more unusual as the final four games were played in Toronto. The circus was in town and Madison Square Garden was completely booked up. Adding to the oddities was that one of the cities was in a country that had declared war, and the other was not.

"When we came up to Toronto, you noticed all the uniforms and the rationing, you certainly didn't see that in New York," recalled Clint Smith, the Rangers center who set up a key goal in the pivotal Game Five.

Three of the four games the Rangers won were decided in overtime, including the last two; 2-1 and 3-2 thrillers. Muzz Patrick scored the winning goal in Game Six on a breakaway after the Leafs pressed heavily and buzzed the Rangers net, a tactic rarely used in Stanley Cup overtime. Bryan Hextall scored the Game Seven winner in similar fashion.

The Rangers would never suspect that it would be last Stanley Cup they would hoist for another 54 years. The following season, the Rangers celebrated paying off the MSG lease by burning the paperwork in the bowl of the Cup, a move that took on a greater mystery as the years without a Cup wore on.

In 1931-32 the city of Toronto was desperate for a winner after wallowing in mediocrity for ten years. As the first NHL franchise to win a Stanley Cup in 1917-18, they were determined to bring the bowl back. 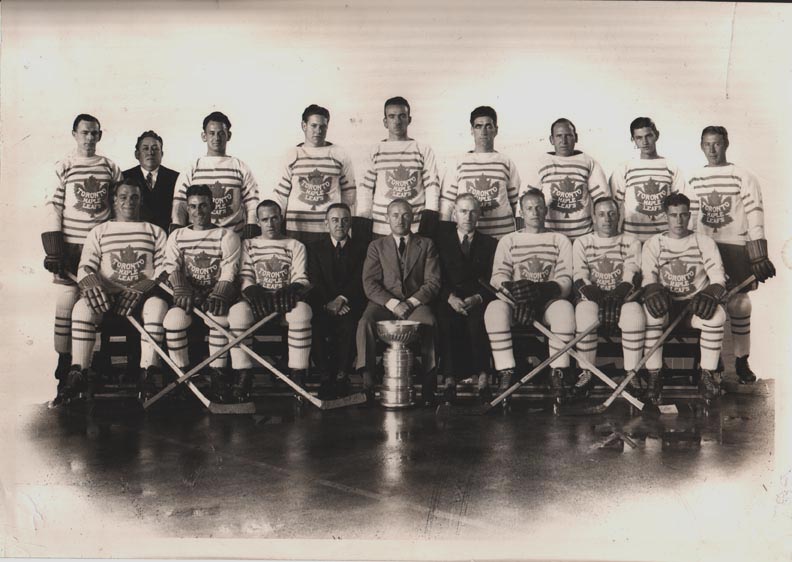 Owner and president Conn Smythe had put all his energies and financial resources into building two major projects. The first was Maple Leaf Gardens and the second was the 16-member team itself.

The Gardens were ready as planned. Smythe was forced to lure brickworkers, carpenters, and general labourers into the stock market, paying them with shares instead of badly-needed depression era dollars.

Smythe then spent the unprecedented sum of $35,000.00 to acquire King Clancy from Ottawa, who he added to an already solid defensive corps featuring Hap Day and Red Horner.

Younsters Busher Jackson, Joe Primeau, and Charlie Conacher (making up The Kid Line) would all end up near the top of the league scoring race. Trouble was, after its first five games, the team remained winless. Smythe fired coach Art Duncan and went out and hired Dick Irvin, who had led the Chicago Black Hawks to the final the year before. The team began to string victories together rapidly.

By season's end, they finished four points back of the defending champion Canadiens. After the Rangers blew out the Habs, and the Leafs took care of Chicago, the final was set.

Each of the series finals three games in the best of five Leafs sweep were played in a different "garden".

Opening in Madison Square Garden, the Leafs handily won 6-4. The Kid Line netted four goals, three from Jackson. The series then moved to Boston of all places - a neutral sight deemed necessary due to the annual arrival of the circus in the Big Apple. There Toronto won 6-2, with Conacher and Clancy each scoring twice.

In Toronto, the Leafs again pounded the Rangers by a 6-4 score and the city of Toronto had it's first Stanley Cup since the St. Pats had won it ten years earlier. Adding to Smythe's sweet win was the fact that the Leafs banked on goalie Lorne Chabot, obtained from none other than the Rangers in the off-season.

The Leafs would see another decade pass before winning their next Stanley Cup in 1941-42.