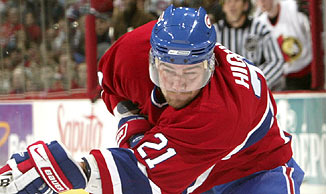 Chris Higgins was back on skates on Saturday and looking to be back in the Canadiens lineup next week.

"It's been a very torturous six weeks," the speedy left-winger said. "The only thing that makes it better is that the team's playing pretty well."

Higgins was leading the Canadiens in scoring with eight goals and five assists in 13 games when he suffered a high ankle sprain on Nov. 4. A game Saturday night against the Buffalo Sabres was to be his 16th on the injured list.

He skated on his own Thursday and Friday, and joined his teammates on the ice for a pre-game skate Saturday morning.

Coach Guy Carbonneau said that if the ankle holds up, Higgins could return some time next week when the Canadiens play three home games - Tuesday against Boston, Thursday against Tampa Bay and Saturday against Pittsburgh.

"We're really optimistic that he should be able to play, if not this week, than maybe by the weekend."

The coach said he would ease Higgins back into the lineup, using him five-to-seven minutes per game on the fourth line until he feels ready to skate his regular shift.

Which line those shifts will be on is the next question.

Since Higgins went down, 19-year-old rookie Guillaume Latendresse took his place on the top line with Saku Koivu and Michael Ryder and has improved with each game, posting six goals and five assists in 15 games.
The line has done well of late, thanks mainly to Koivu's six goals in eight games, but is decidedly slower overall with Latendresse, a big but slow-moving power-winger, in Higgins' spot.

Media pundits and fans have speculated that Higgins may be better used at centre on the second line, where wingers Alex Kovalev and Sergei Samsonov have been stone cold.

Carbonneau said he would deal with line combinations when Higgins is up to speed.

Higgins had always played centre before the Canadiens converted him to the wing two seasons ago while he was with Hamilton in the AHL. He said he would have no trouble going back to centre if he is asked.

"I didn't think about it too much, but it seems to be picking up steam now about what the line combos will be when I return," he said. "We can talk about it more when I get back."

Higgins, a native of Smithtown, N.Y., had a brilliant second half of last season and ended the campaign with 23 goals and 15 assists.

He was even more impressive at the start of this season, posting 13 points in as many games, with three short-handed goals.

"I want to be back as soon as possible, but I have to talk to the staff after every skate," he said. "I don't want to skate and then be sore the next day and have to take a day off.

"We should have a better idea by the end of the week."