Habs Over Caps 4-1 / Another Officiating Low

Share All sharing options for: Habs Over Caps 4-1 / Another Officiating Low 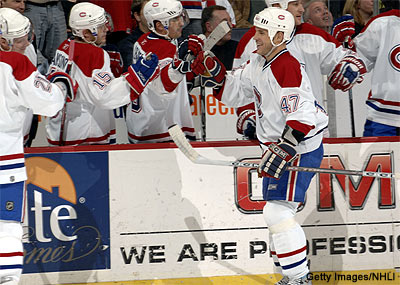 Tonight's Capitals and Canadiens tilt had the cumulative effect of splitting my emotions in different directions. While it may at first glance apprear to be a game in which the Habs coasted to a 4-1 win, it left different impressions with me.

As a consequence of the way the game went, I have little thought cohesiveness to bring to this post so quickly after it has ended.

For a quick random game summary: Cristobal Huet was his solid usual self. Andrei Markov and Radek Bonk did great work neutralizing Alex Ovechkin to the outside lanes. It was funny to watch Aaron Downey score. Alexander Semin is better than most people think. Guillaume Latendresse notched two assists playing on the thrid and fourth lines. The Capitals have zero blueline presence on the PP. Washingston doesn't quit - very exciting team to watch. The referees missed the game.

While watching the game I remembered something my father had said years ago while we were taking in a CFL game in front of the Sunday afternoon TV.

During that Alouettes game, a touchdown was called back and my Dad was fuming. I was too young at the time to recall the infraction call being a good one or not. I do remember my father saying bad officiating is what keeps him from watching sports at times.

Today his three VCR's capture all his interests from pucks and balls to Nascar and Formula 1. I imagine he does his share of fast forwarding.

Dad was not just a casual fan, he followed baseball, football, was outright religious about hockey, was a great swimmer in his youth, did some downhill skiing, snowmobiling, and mostly raced motorcycles with the passion of a dedicated madman while winning most of the time.

I never understood then, why it had upset him - especially with hockey. The Canadiens won all the time then. I was in my glory. There wasn't anything to complain about.

Over the last while I've noticed myself emulating his long ago behavior. Lately it's become very apparent to me. Tonight, the Canadiens won, but when the final buzzer sounded, I was incensed. When that occurs, the last grasps at sanity must make oneself wonder why fumes upset what ought to be joyousness.

I do lighten up, easily, but the overiding emotion never strays far.

My father didn't raise me to be a homer type of fan. When we watched games, we watched both teams. When we saw bad calls made, I learned without a blind spot that they occur to both teams.

My barometer to being grounded revolved around the ideals that no player was bigger than any sport, no team more important than the game itself. Fans fit in at the bottom line.

That line is thin at times. It is where my father found himself when he said that comment years ago. It's where I find myself at lately: bemused by where the sport seems headed, put off completely by incompetant officiating.

There was always that human element - referees are people, and human as we all are, we make mistakes.
It's not an unreasonable notion. But sport is a business.

If I made as many mistakes at my job as the officials on ice did tonight, I'd lose my job. If everyone at a plant or office performed as detrimentally as these jokers in zebra suits did tonight, said business would shut down.
Now I care about this game of hockey, more than I care about my Montreal Canadiens team I write of almost daily. I want this game to be at it's most fluid, passionate, poetic best.

All I can see after games like this is a sport business grinding the gears of uncomfortable growth while it fights off indifference from those who walk away from it. Away from arena's. Away from their T.V. sets. Forever turned into empty seats that can't quite speak loud enough for our favorite league to hear.

During tonight's game, both teams got reamed by bad calls, non calls and overzealous calls. 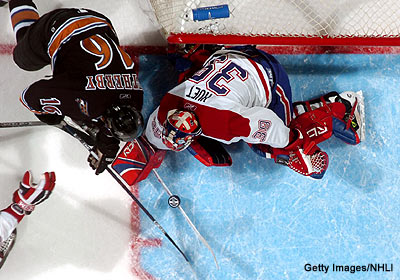 Washington lost the games opening goal to an extremely quick whistle. Huet had never frozen the puck, as it slowly trickled through his pads into the net unrewarded. There was not a Caps player near him to warrant blowing it dead any quicker. From then on, like the knee jerk correction only a ref can make in amends, they spent the remainder of the game, taking their sweet time to blow dead any puck tightly in Huet's firm grasp.

That did well to raise the tensions and general chippyness of the game.

It increased the stick fouls to an unpenalizable level. There was simply too much to call - hardly what last years crackdown on fouls was initiated to achieve. They penalized retaliation while missing everything that lead to them. Apparently, you can dish it out, you just can't give it back.

Players on both teams took turns faking injury and diving and falling at will. The most obvious dives went uncalled. The slightest of stick fouls were seemingly picked out on a whim. The useful double minor call seems extinct.

Alex Kovalev gave Alexander Ovechkin a one handed sword slash to the wrist area. Ovechkin bent for a split second, to favour it, a minute later he led a dazzling up ice rush. Both players should have gotten two.

Aaron Downey's goal should have been disallowed. He knocked a puck down from over his shoulders with a high stick. While it didn't look like it hit the ice, it bounced off Kolzig's pad to be knocked in waist high by Downey a second time. Shouldn't the whistle have blown?

Craig Rivet got into a tustle along the boards with Chris Clark. The Caps captains stick caught Rivet in the forehead - no call. Rivet pursued Clark, likely to pound his lights out. A stick tap here and there from both and their arms met in a shoving match. Rivet relented, looking pissed - Clark was in a full facial shield. Rivet got the two he deserved, Clark went unpunished.

With a 2-0 game still on the line, the Canadiens were given 6 third period penalties, five of which were in the final ten minutes The third call came six seconds after the secord call ended. The final three calls overlapped into two 5 on 3 advantages for the Caps. Washington were handed three calls themselves, one, I forget which, was extremely questionable and killed their powerplay.

In the midst of all this, the Capitals netted one while two men up. The Canadiens, quite proficient on the penalty kill, continued to ice the puck at every opportunity. This was primarily how they had to play the final ten minutes.

I wonder how that empty seat feels?