Habs Deals In The Works

Share All sharing options for: Habs Deals In The Works 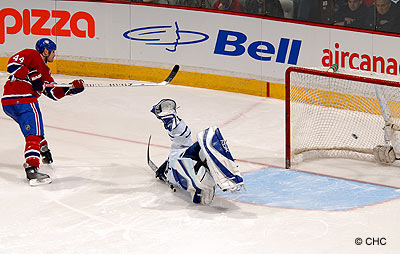 There is lots of speculation regarding the future of Canadiens defenseman Sheldon Souray in Montreal.

Souray, one of the heroes of last nights shootout win over the Leafs, is in the midst of a career season, and is an UFA come July 1st, 2007. The origin of the speculation resides in the fact that three of Montreals blueliners will in the same situation come July. 14 Canadiens veteran, Craig Rivet will likely not go anywhere, and could resign near to the same dollar amounts he is currently paid. The more pressing scenario is that of Andrei Markov, the teams best defenseman. Markov, 28, has long been underpaid in the teams salary structure and is now coming upon his prime years. Souray admitted as much in an interview this week when he stated that GM Bob Gainey's priority must be Markov. He also alluded to Rivet's tenure with the team before suggesting that his case would be looked at only after those two would be taken care of.

Regardless of the fact that Souray remains a hot commodity in trade rumours, he is insistant in the press that he would like to remain a Canadien. He is also realist enough to understand his rising market value will make it more difficult to retain him. Gainey it is said, has been talking up the phones while maximimizing the asset Souray is becoming. While Gainey likely wouldn't deal him unless a very fetching offer comes his way, he is listening intently while offers increase. Souray could well command in the region of 5 to 6 million come next season. Considering contracts given out since to lockout to the likes of Wade Redden, Ed Jovanovski, and Bryan McCabe, it is realistic to suggest Souray may be priced out of Montreal.

One rumour that perked my ears up earlier in the week had him heading to Vancouver, an appealing west coast destination for Souray, in return for Markus Naslund. The deal was also said to include Michael Ryder and Luc Bourdon. The Canadiens, however are seeking a centreman in return and could be more in tune to listening to the Detroit package offer involving Pavel Datsyuk and Chris Chelios.

While Gainey has been trying to find a taker for Janne Niinimaa (good luck there!) he has received calls from Chicago inquiring about Sergei Samsonov.

However this unfolds, it will be interesting to follow. 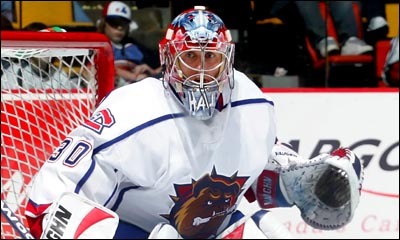 Another move Gainey could pull the trigger on is a David Aebischer deal.

Aebischer is a # 1 goalie on many a team but will be hard pressed to dislodge Cristobal Huet from the post in Montreal. As Huet has grabbed the bull by the horns with his recent play, Aebischer's unknown destination has seemed to become a detriment to his play in the last month. This is not a situation Gainey can afford to let sit and simmer for too long. The asset Aebischer is, will decrease with substandard play and the timing may never be more right as goalie prospects in the organization are ripe for the NHL. Yann Danis in Hamilton enjoyed a steady stint at the beginning of last season before Huet returned from injury. Unfortunately for Danis' developement, he has lost his starters role in Hamilton to Jaroslav Halak, who is currently posting amazing numbers with the farm team.

Halak was recently named Goaltender of the Month for November.The native of Bratislava, Slovakia, posted a record of 7-1-0 with a league-best 0.82 goals against average, a .972 save percentage, four shutouts, and allowed just six goals on 214 shots in eight starts in November. Halak’s efforts have helped the Bulldogs to a 10-2-0-1 November record, moving them into second place in the North Division standings, after a 0-4 start under Danis.

The Canadiens also have highly touted Carey Price in the system. Drafted 5th overall in 2005, Price has been tagged (Okay, worst pun ever!) as the Canadiens goalie of the future and will need an opening in Hamilton next season to further his developement stage.

This sets up a need for some crease clearing in the Montreal system. One thing is for certain, after dealing off Jose Theodore last season in the Aebischer deal, Gainey would require some continuous return on the trickle down of the deal. There is little doubt, that somewhere along the lines, moves in this regard will be made.

The Canadiens have also clarified