Habs and Stanley Cup in the Same Sentence - Whoa! Hold Your Horses!

Share All sharing options for: Habs and Stanley Cup in the Same Sentence - Whoa! Hold Your Horses! 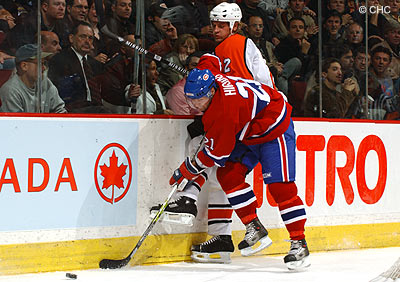 I was waiting for it.

I knew it was coming.

It was almost bound to happen.

What I am referring to is the mentioning of the Montreal Canadiens name in the same sentence as the words "Stanley Cup!"!

I had that gut feeling that if the Habs were to defeat the Sabres Tuesday night, the expectations would skyrocket.

My gut also told me that if the margin of victory were more than a goal, an OT goal, even a SO goal, that the expected hyperventilating would launch itself over Habsnation with a seldom seen, in latter years, all out frenzied force.

I was almost right!

The difference is not entirely apparent 33 games into a season.

I admit that with 49 games to go - an eternity of circumstances - that things look on the up and up.

When a team plays like it believes in itself, fans ultimately follow suit. Player performances render heartbeats aflurry, but that knot in your shorts is not yet a Stanley Cup parade.

So whoa, Nelly! Let's take stock, get a grip, analyse the unforeseen, and get ready for the ride.

Yes, the Habs of late are doing well and look promising. They looked promising last April, up two games on the Hurricanes in the playoffs. Fate's a bastard - need more reminders! Didn't think so!

Of course this isn't last year or last years team, though they have much in common. GM Gainey kept a solid and promising group intact and we are now seeing the dividends of that decision. While performances of late have been inspiring, it is unthinkable to suggest that the Habs can continue winning in the manner they are getting used to.

The bottom line is, a team cannot continue to win by surrendering 40 shots per game, taking undisciplined penalties, and looking to a different hero each night.

While come-from-behind victories make for rousing headlines, the seeds behind each games 20 minute rut need to be addressed.

The Canadiens, so far, have their depth to thank while they add to the win column. That, and Cristobal Huet's nightly heroics. Their pride speaks well in regards to limiting themselves to one single two game losing streak this season. The team has been able to bounce back well and it rides over injuries with relative ease.

Lying under the many positives the team has exhibited are traits other teams will adapt to and pick apart.
The nagging bad habit of indiscipline needs righting before teams exploit that weakness. The smirk on coach Guy Carbonneau's face after each dubious call needs to be replaced with a concerned non expression. That smirk is telling players they have usually done no wrong when at times the contrary is true.

The 5 on 5 play continues to need tinkering. The special teams units have done well to disguise this fact. Look at the Habs individual plus/minus stats - one line remains calmly on the plus side while the other three falter slightly. It's not a panic situation, but the teams defense needs to tighten up and cut down the shots on goal. The Canadiens tend to willingly surrender perimeter shots while counting on Huet to turn them aside.
Defenseman then turn loose pucks up ice with a single pass or two. While this works in the regular season, it's tougher to execute in the playoffs.

The thinking behind this system is that it is more efficient to turn a rebound calmly deflected back to the neutral zone than it is to play a shoot-in. On dump in plays, the opponant is allowed time to set up in the Canadiens zone. With the clamp down on obstruction fouls, this style avoids contact under puck pressure situations thus eliminating the chance of penalties being called.

Successful playoff teams will attempt to steer from falling into this luring trap of taking the given shot opportunity. They will realize that Huet is rarely beaten from the thirty foot range. They will dump the puck, crash and bang, double team on the defenseman, set up screens, and generally spend more time in the Habs zone than teams are doing now.

So far, the Habs saving grace has been the play of their special teams, which are both ranked among the leagues best. The success of the powerplay has been due mainly to Sheldon Souray's booming shot. Teams who key on Souray, open up space in the slot. Team who don't, pay the price. The passing skills of Alex Kovalev and Andrei Markov, have so far escaped defensive blankets.

Teams lining up against the Habs will soon figure out athat it is best to stay out of the box.

On the penalty kill, the Canadiens have used positioning, anticipation and puck pressure skills to perfection. This facet of their game will remain forever unchanged under the guidance of Carbonneau. Teams do not have a habit of defending against another teams penalty kill, but when PK unit's are as efficient as the Habs, it makes opponants nervous and unsure. The Canadiens maximize this notion to its full advantage. The only risk in all of this is becoming so confident and cocksure, that taking penalties becomes a viable risk. With increased chances, opponants will eventually beat the odds.

As anybody who follows the game knows, playoffs are always a different story - teams adjust to other teams habits and tendancies, special teams included.

Where the Canadiens must begin to excel to become serious contenders therefore lies in three main facets of their game - cutting down shots on goal, eliminating frivolous penalty calls, and improved 5 on 5 scoring.

When the Habs begin to control, from beginning to end, all three periods of the game, I'll subscribe to Stanley Cup dreams. Once they start early with a lead, defend it soundly and increase it, stay out of the box, and allow Huet to face less rubber, I'll plan where to place my lawnchair on St. Catherines Street.

In the 49 game interim, I'll be keeping an eye on that transition. If they can find the playoff mode by January or Febuary of 2007, we can all believe together.