Habs All Over Ovechkin In More Ways Than One

Share All sharing options for: Habs All Over Ovechkin In More Ways Than One 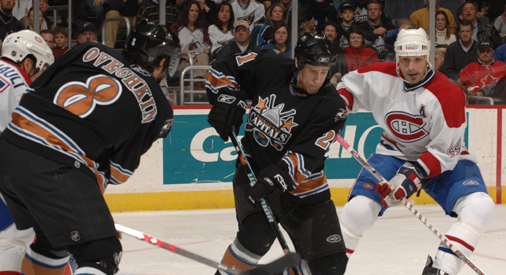 Alexander Ovechkin is quite the newsmaker, on and off the ice. As the great 8 gets a firmer handle on the English language, the Russian star will surely be a media and blogger story trigger for years to come. Here's just hoping he don't turn into a Sputnik Roenick!

Writers for Le Journal de Montreal in this morning's paper, were all over Ovie, covering him pre-game and post game, with everything in between. There were on him like Hugh Hefner on a Playboy Bunny, with a fistful of viagra!

Stories on Ovechkin's comings and goings and quotes were spread out on six pages of game coverage. I consider myself damn lucky to be able to snatch this paper up a hundred miles from where it's published. I can't imagine the knowledge I'd have lost out on if I were without. I don't always agree with all they say.

Mingled in with the paper's astute thinkers, are the occasional morons who believe they have a better handle on the Habs than anyone else in the city, including the teams GM. That, or they just prey to controversy making themselves a name and selling more newsprint.

There's lots to cover, so I'll start somewhere in the middle:

It seems Ovechkin became very good friends with the Habs Andrei Markov while both were teammates in the 2004 Olympics. Before yesterday's game they were spotted enjoying each others company and sharing some laughs. Ovechkin mentioned that since The Games, they have stayed in touch, even training together during the summer months in Toronto.

The great 8 said the had lots of catching up to do the morning of the game.

When asked a few days back, which defenseman in the conference gave him the most trouble, Ovechkin dropped a few names while singling out Zdeno Chara and Markov. He uggested that Markov is one of the better D-men in the NHL.

"It's because he knows my every trick on the ice. He reads me like you read a book."

When these comments reached Markov, the defender said, "He's so funny. He's just trying to put me to sleep with all that. It's true that we're great friends but that ends on the ice."

The paper noted that "as his command of the language improves, so does his ability to express his opinions. He's quite a lighthearted treat, a refreshing athlete."

Glen Hanlon stated that he "wished the fans in the Washington area realized just what a fun-loving exhuberant star they have in their midst. He's an extraordinary player and not the only one on the team."

The Caps pull in a little less than an average 13,000 fans per game at the Verizon Center, even though the team has been doing much better than was expected. Hanlon says that will change as the team moves up in standing.

When Ovechkin was asked why the seats were empty, he replied, "They're only half empty!"

Asked to comment on his recent run-ins with the Sabres Daniel Briere, Ovechkin suggested "they were now even."

Briere seemingly evened the score in the previous game when he tagged the Russian with a sprear to the family jewels.

Ovechkin enjoyed the Buffalo crowd getting on him, heartily booing him after he scored. Ovechkin put his hand to his ear in a suggested "I can't hear you" pose.

"I play for fans and they enjoy players who give it up for them. Those boos motivated me way more than they ever could bother me!"

When asked what happened to his tinted visor, he exclaimed, "It's all Martin Brodeur's fault. He complained that he couldn't see my eyes behind it. He should keep his eyes on the puck. Anyhow, that's not why I wore it - I am just trying to be a little different, that's all. It went well with my personality. If left up to me, I'd wear one that's completely black!"

On the taxi ride taking reporters to the game, they noticed two large billboards that proclaimed, "Do you know Number 8?' They asked the taxi driver if he knew who the young man was. The driver, a native of Sierra Leone in Africa, had no clue.

"Is he French or American" asked the driver.

He turned to one reporter and asked in complete seriousness. "Is he still alive?' 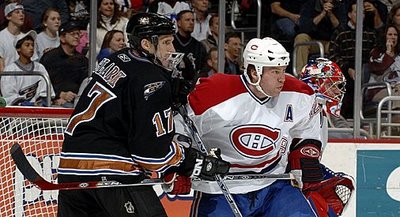 Another focus of the papers Ovechkin coverage centered around how well the Canadiens managed to contain him on this night. Coach Guy Carbonneau told that the plan was the same as the one applied Sidney Crosby a week earlier. They attempted to have the Markov - Komisarek duo on him at all times, along with Radek Bonk's line keeping to the perimeter as much as possible.

Cristobal Huet, who played another outstanding game, added, "He's such an explosive player in the offensive zone. He's a constant threat. He can let one go quickly from any conceivable angle."

Carbonneau added that he was especially pleased with the job done by his defenseman. He also gave a tip of the hat to Bonk's line, noting that Hanlon pulled the Ovechkin trio off, each time Carbonneau countered with Bonk's.

"That's exactly what I'm hoping to achieve!" said the coach.

Should be quite a circus when Ovechkin hits Montreal on Febuary 20th.