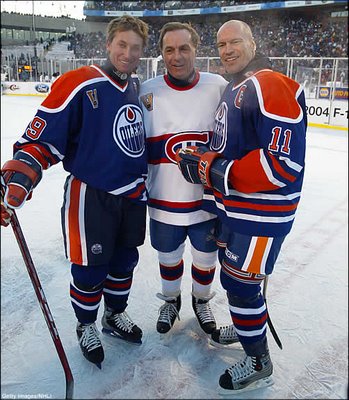 The last two days haven't allowed me much blogging time - nightshifts have reared their ugly brutal head again for back to backs just in time to get on my nerves before Christmas.

That and I'll be missing the Habs and Sabres game tonight. Catch it on tomorrow morning's one-hour mini-Express, I guess.

I just thought I'd drop something down here, to keep things interesting.

Scanning through some other blogs and sites I came upon a pair of Gretzky related things again - no the usual stories one encounters.

The first one is courtesy of the Legends of Hockey and writer Joe Pelletier. Along with profiling the greats of the game, Joe has also written exclusively on international hockey, including the 1972 Summit Series.

That game is also memorable to Gretzky for another reason - one of his most embarrassing. He peed his pants right there on the Team Canada bench!

The incident happened during the first overtime. Gretzky, being double and triple shifted, had played a ton of hockey in this game already, and was exhausted halfway through the first overtime. He compared his physical state to that of a marathon runner in his 26th mile. He was on the bench and had no control over his own muscles.

Just as Gretzky realized what was going on, one of the coaches told him to get ready, he was to be going into action at the next chance. Somehow he formed enough energy to go back out and play another shift.

By the way, no one knew Gretzky did this. But as he revealed in his autobiography, he told everyone after the game. His teammates, celebrating a great victory, laughed heartily for nearly 30 minutes.
Check out Joe's other oddball stories.

Myrtle's site has linked to an interesting piece in the New York Times on Ty, Wayne's 15 years old son who is playing hockey at a Minnesota Prep School. Not exactly what I imagined.

Finally I thought I'd toss out a little hockey trivia question I asked another blogger days ago. It's a tricky one!

Which member of the Hockey Hall Of Fame has a son inducted into the Rock And Roll Hall Of Fame?

I'll give a hint a day until someone gets it.