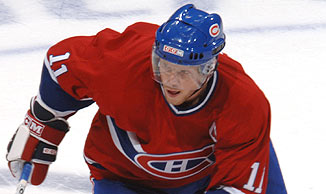 A decade ago, the mere notion might have been unthinkable. Imagine, a European born player captaining a Canadian team! Don Cherry would have a fit!

Today, there are 4 Europeans donning the "C" in Hockey Nation, and the treatment from fans and media alike never let them rest easy. In slumps and mediocrity, soon as a team swoops, questions involving the quality of the leaders ferment behind notion that a Canadian captain would strangle complacency differently.

The slings and arrows may be unfair, but it's a given that whenever a European captain's team struggles, the angle at the root of the criticism will never change. Nationality always permeates the questions.

In Toronto, Ottawa, and Vancouver, where Swedish born captains Mats Sundin, Daniel Alfredsson, and Markus Naslund respectively lead their clubs, a regular refrain taints their glory. While all three have consistently put up big numbers through the years, their lack of "in your face" leadership off the ice distorts their efforts on it.

Perhaps the captain's role gets confused with that of a drill sargeant. No doubt that a good "rallying the troops" is the perceived Canadian way, while "doing their talking on the ice" follows a more Swedish way of going about the business of leading.

In Montreal, the Finnish born Saku Koivu is an altogether different proposition. Koivu has never been expected to produce the numbers the others put up, but rather be a complete leader in every facet of the game on and off the ice. Much of the criticism directed Koivu's way in the past had everything to do with what his role wasn't. The Canadiens lack of a pure number one center has always been squarely rested on Koivu's shoulders. He has become their top pivot by default, yet he has never coiled from the duties of leadership.

While Sundin, Alfredsson, and Naslund are annually harangued for not giving more of themselves, Koivu has been able to get by on just giving his all. The disinterested tags labelled on the Swedes is often well deserved. When all three have the ability to put it in high gear and don't - they get what's coming to them.

Unfair as all this is on the three Swedes, the Finn has had other dealings to distract him from his task at hand. It also tends to refocus him rather quickly.

On the way to recovering from cancer, and more recently, a career threatening eye injury, Koivu has seemingly been given the benefit of hardly any doubt when it comes to his leadership abilities. In short, no more demands are being asked.

It may be a simple question of character. Like the other three, Koivu tends to keep it quiet on the whole. In situations of adversity, Koivu has the habit of peeling paint off the dressing room walls with his glare. When he is disatisfied, the room knows it without guessing. It is spoken with few words.

In may be that for in adversity, this captain was formed.

While team mates have witnessed him battling back, rehabing, and dealing with the pressures of captaincy in Montreal, many simply follow his lead. To some of the younger Canadiens on the team, Koivu has developed the aura of fearless leader. While he is one of the teams smaller forwards, his heart is huge, his desire endless. The contagious spirit and the never say die attitude Koivu brings has made the Habs an interesting third period commodity. This season, they have rarely been out of a game and often vault ahead led by Koivu's determination.

This is called inspiring.

It's what a captain ought to be doing - in the purest Canadian way.