Sidney Crosby In Montreal - Behind The Scenes

Share All sharing options for: Sidney Crosby In Montreal - Behind The Scenes 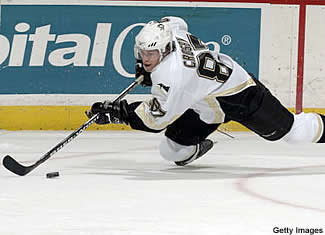 Some news and notes on the Crosby visit to Montreal, translated from Le Journal De Montreal.

The atmosphere in and around the Bell Centre spoke volumes to the fact that this was no ordinary Saturday night game.

For the Penguins morning skate, a few hundred young boys and girls were gathered in the lower reds. At one point they all began chanting "Cros-bee, Cros-bee." The scene put a smile on everyone faces, those in attendance unable to help themselves at the though of sights they'd witness if Crosby, a boyhood Habs fan, were to one day don the red, white and blue.

After the skate, Crosby was interviewed (in French no less!) and said that he didn't feel all that different from the player he was last season. Of course, much of the questioning revolved around the fact that he has launched to the league's scoring lead with an amazing run this week.

"I'm a little surprised to be there", said Crosby, "I'm just trying to do things the same way as last season."

"Over the course of last summer, I put a lot of emphasis on improving my skating and my speed."

No kidding! One just had to see him fly during the morning practice - he looked like a Formula 1 racecar on skates!

His agent, Pat Brisson was present, and was especially proud that his client now had a +18 rating.

Crosby said that the fans chating his name during the morning skate warmed his heart. "It was a real nice feeling", he added.

"I became a Habs fan at a real young age, and it's always very special to play here. It reminds me of when I came to watch games here as a kid. Nowdays, I just try to come here and do my best and set the right example."

Crosby was quite generous with his media time. As usual, everyone wanted some time with the Kid.

The attention hardly phases him. "I accepted this part of the job a long time ago", he said."It's part of what is the life of a hockey player. I've had lots of experience with this."

Crosby was interviewed between periods after the first, on the french RDS channel. While Crosby has spoken french for quite a while, the language sometimes necessitates extra concentration he cannot manage during a game. He answered his questions in English, asked the host to explain this to fans. A respectful gesture from an always accomodating young gentleman.

Penguins assistant coach and former Habs GM Andre Savard was also on hand for the morning skate. Savard is well travelled in the corridors of hockey intelligencia, having worked in practically every facet of the game. Impressing him is not an easy thing to accomplish. He had no shortage of acolades to pin on Crosby.

"Even a blind man can see the talent within him", he said. "I've never seen a player work so hard at improving himself constantly. In that sense, he is exactly like Bobby Orr and Guy Lafleur. He always has the pedal to the medal. For two years in Rimouski, he did the same things."

This is no small offhand compliment from Savard, who saw firsthand the work put in by Lafleur while they were teammates with the junior Quebec Ramparts. He also played alongside Orr with the Bruins. He knows of what he speaks.

"Again this morning, he was out hitting the ice. He's a player who performs with high levels of energy, intensity and passion. I never fail to be impressed with his work habits."

Tickets for the game were reaping large paybacks for the multitude of scalpers lining La Gauchetiere St. prior to the game. A pair of seats in the reds going for as much as $1,250.00. One fan came hundreds of miles, from La Beauce, and paid $2,500.00 for four reds - the scalper not even blinking at the initial offer of two grand.
Most seats were garnering four times the sale price. The whites went for $250.00, the blues for $200.00, and the greys for $160.00.

One fan, decked out in a Crosby jersey, plopped down $375.00 for three whites, and was thrilled as anything to be getting inside the building.

Evidentally, this isn't the Columbus Blue Jackets! Sidney Crosby was purely Santa Clause for the scalpers on this day.

Close to game time, two seats in reds were remaining for the sum of $500.00. The writer of the piece for Le Journal was tempted to grab them himself, when they were quickly snatched up by a pair of fans with faster wallets.

In Guy Lafleur's weekly column, titled "Droit Au But" (roughly translated - "Shooting For "), he spoke of Crosby with unparrallelled adjectives.

"He's the most complete hockey player to come on the NHL scene in 20 years", said Lafleur.

"He has a ball playing the game and his love for it shines through everything he does on and off the ice. He can improvise in any facet of the game with uncompromising ease. He's sure of himself. He sets up his players with a rare smoothness and has an instinct for ending up in the right places at the right times. Everything he does, speaks of him as a team player, first and foremost. His goals are to make the Penguins better which each thing he accomplishes."

"I'm hardly surprised to see him leading the league in points, even at 19 years old."

"He has the immense quality of wanting to surpass himself with each new game. He is hockey's best
ambassador and the perfect role model for any player of any age. He is gold for the NHL."

I haven't heard it summed up better!