Share All sharing options for: Crosby Explodes For 6 Points - Leads League In Scoring 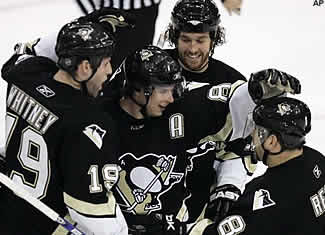 Sidney Crosby's Reebok " I am what I am" commercial begins with the superstar listing things he has no control over. The list of inconsequencials never mentions the growing multitude of things he does control. To the NHL All-Star fan balloting he has a stranglehold on, you can now add the NHL scoring race.

You may be tempted to add the controlling of the Philadelphia Flyers to it also.

Crosby grabbed the lead in the scoring parade with a six point explosion in an 8-4 routing of the Flyers Wednesday night. I kept waiting for a shot of the Flyers bench waving white towels. Crosby has totalled 15 points in five wins over Philadelphia this season, and 29 points in 13 contests versus the Flyers in a little less than a season and a half.

For the record, it's taken Crosby a mere 108 games to vault to the top of the scoring race for the first time.

After a rookie season in which he tallied 102 points on 39 goals and 63 assists, he now has 15 markers and 32 helpers for 47 points in 27 games. The totals put him 3 ahead of the Rangers Jaromir Jagr.

With the manner in which he has been performing of late, it's a lead few assume he will relinquish - for now and possibly the next decade.

The goal and five assists he managed against the bottom dwelling Flyers were a breathtaking display of his many skills. He simply picked Philadelphia apart by drawing checkers towards him, then finding and feeding the inevitable teammate left uncovered with relative ease.

With each amassed goal or assist being of highlight reel calibre, one may be entranced enough to overlook Sid the Kid's most glaring traits.

Adding to his abilities with a stick and puck are an unquenchable desire and determination to be the best he can possibly be every game. His perseverance and focus are quickly becoming his calling cards.

Coach Michel Therrien rolled out the superlatives after the game, stating "We saw a special performance by a special player. It was unbeleivable, Sid was phenominal". The adjectives were meritted.

Crosby for his part, took a more modest route to explain his breakout night. "Part of my job is to move the puck. It's up to my teammates to finish the opportunities, and those guys were on tonight."

It could be added that their work consisted of sitting around waiting for Sidney to hypnotize the opponant. He made his teammates work appear that straightforward.

The Flyers do not have to deal with Crosby until January 13th, 2007. Friday, the Penguins play at home against the Islanders before travelling to Montreal to play a Saturday night game against the Canadiens.
The tickets scalpers will have a field day!

For more on Crosby, check out "The Sidney Crosby Show" and the players official site.