Colin Campbell and His 3/10 Solution

Share All sharing options for: Colin Campbell and His 3/10 Solution 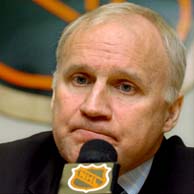 So the NHL has a big, big problem on it's hands! Scoring is down from last season's peak of 6.1 goals per game, to a sacriligious, unthinkable 5.8 percent. A whopping drop of 3 tenths of a percentage point.

You know, I've been watching games lately, wondering just where went that additional 3/10's of a goal per game. At first I surmised that it must have gone the way of Niklas Sundstrom, when he took his offensive dynamite with him to Modo in the Swedish Elite (?) League.

Then I got mathematical and deduced that the fraction in fact needed to be blamed on two teams, as it does take two teams to bring down that whopping total together. So now, that three tenths percentage actually worked out to 0.15 goals per team, per game - still totally unacceptable!

Finding myself in decimal territory - I was decimated beyond a fraction - I realized I now had to multiply this huge sum by 30 teams, if I were to find the true culprits of this critical decline. Even worse, I would have to project that total to stretch across the 36 games each team has played on average, and divide that by two once more, because is still take two teams to play a game.

All this I thought, was another job for that genius of hockey theology and reasoning, the smart as he looks, Colin Campbell.

I did, by accident, discover the source of that twitch that Gary Bettman has developed over the years, when questioned on anything to do with Canada, money, or television contracts. You know the twitch, where Bettman's chin jerks slightly to the right then up a quarter inch like an old misfunctioning typewriter.

Each time the thought of Campbell enters my mind now, I get that twitch!

Especially now that he's blathering on again, like he did last week, about the need to look at larger nets one more time. When I re-envision the enlarged nets used in the Ricoh Cup pre-season prospects tournament between Toronto, Montreal and Florida, I not only twitch, I get nausious also.

The prototype nets feature curved posts and an angled crossbar giving them an oval appearance. Either that or it was an acid hallucination!

Habs prospect and current Team Canada goalie Carey Price had nothing but fits cencoring his own expletives when asked about a bad performance he endured while being used as a ginea pig to test them out. He said that goalie would never be confortable in front of them. Price added that he could not cuddle the post without looking for holes. It was a brutal experience.

There has to be a better solution!

So back to decimating decimals I went, looking that vanishing three tenths of a goal that somehow went the way of the straight stick blade, the end to end rush, and Maple Leafs Stanley Cup parade's that faded off into the ozoneless sunset long ago.

I watched some game videos and thought I almost saw three tenths of a goal go in. I know I saw 0.15% of a goal disallowed!

I came up with some less drastic solutions like making the goal line thinner - those almost goals that almost cross the line would be make it over and be counted now. That would up the goals scored by 0.036%, at least. Shave a sixteenth of a inch off the puck - who'd even notice! More pucks would surely fit in between the pipes and avoid hitting them as obliquely. That could raise goals scored an additional 0.712. While we're at it, scrape some of that red paint off the posts themselves - there must be a good 10 coats and touch ups on there per season. There goes another 0.252!

If I can just find something / anything that provides for another 0.50 increase, well then, then...we're right back where we started last year.

After rolling back salaries 24%, and reducing goalie pads in size, maybe this is what's coming next?

Maybe they should try something novel, something that's not been done in decades. Something akin to leaving the game well enough alone.

Stick with re-aligning those divisions. Flip-flop Atlanta and Columbus - nobody really cares. Balance the schedule so everybody sees all teams in a given year and it will please the majority.

I haven't heard one person yet, speak up to suggest they do not want to see Crosby and Ovechkin play their teams. In a few years they might wish they had!

As far as my previously suggested alterations go, I've sharpened my aim. Make Colin Campbell's portfolio of responsability thinner. Shave his time spent speaking to the media with an axe. Scrape the clueless expression off his face. Reduce the amount of access to he has to league statistical knowledge - he's quite dangerous with numbers.

Maybe then I'll get a 24% rollback on my twitch!