Canadiens And Sabres - A Rivalry In The Making

Share All sharing options for: Canadiens And Sabres - A Rivalry In The Making 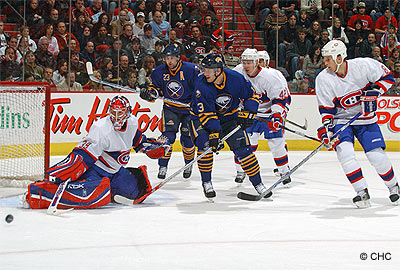 That little important point in the standings means so much more come April than it will now.

Tonight, the Habs fell in a shootout the Buffalo, the third time in four meetings in which extra play was necessary to determine a winner. I'm thinking the the high powered Sabres might not want to meet Montreal in the playoffs come April, and vice versa. It would be a helluva series, mind you.

I'm not a big believer in posting immediate after game analysises. (Doesn't look right, but that's the correct spelling folks!) It usually takes takes time for games to simmer a little before I disect them.

Partway through tonight's contest, the urge to comment on it, win or lose, grabbed and shook me for a variety of reasons. I knew somehow I'd be posting on it sooner or later.

What got me thinking this has everything to do with the games that preceeded tonight's contest. Recent games against the Leafs, Bruins, Devils, and Islanders have brought about some changes in the Habs play.

This was the Canadiens third game in four nights - a dreaded scenario for any team. While the Habs pointed in the last three despite their record of an OT loss, a win, and a shootout loss, I have seen transitions in their game.

For starters, Cristobal Huet seems a touch scarred from a stinging loss to the Bruins earlier in the week. He has altered his style somewhat. Huet is normally squaring himself to shooters based on a standup style, using his size and positioning as his best assets. Lately he seems to be relying more on a butterfly instinct that has so far met with mixed results. Huet's reactions are to a change in how the Habs defenseman are playing. Whereas Huet was always allowed a clear view of shots fired towards him, the Canadiens rearguards have stepped up an effort to block off more shots. Not an entirely bad idea.

While the Canadiens were winning the better part of their contests so far this season, one area of concern surely had to be the high number of shots allowed per game. On most nights it numbered close to fourty. Since the Devils game, they have cut it down drastically - they have begun surrendering an average of two dozen shots while cutting down on oppositions scoring opportunities.

The Sabres had five shots on goal against the Habs in the first period tonight.

The flipside is that Huet has looked a trifle uncomfortable with dropping on instinct to cover the net's lower half in the advent of deflected pucks. The change didn't seem to suit him. On the Sabres second goal, he looked like David Aebischer - nervous and unsure of himself. On Derek Roy's goal, he was on his knees at the notion of a shot. While he picked himself up, Roy fired over his shoulder as he quickly dropped again. Had he stayed upright, the puck would have hit him.

Still he played a solid game.

The Canadiens did a Herculean effort containing Daniel Briere - he didn't manage a shot on goal until late in the third. Defenseman Craig Rivet was all over him like a cheap suit, pounding him at every turn. Briere even took a diving penalty along the way. Every chance he got, Rivet roughed him up.

The RDS broadcast showed a clip of the Sabres morning practice that was quite a treat. They were working on the PP, and the footage showed how Briere and Chris Drury would switch positions on the left side as one or the other dragged the puck towards the blueline. They then showed how the Canadiens seemingly had studied it, and weren't falling for the sly switch. Interesting stuff.

The Canadiens have been subbing defenseman Mark Streit as a forward on the fourth line, and as a penalty killer on the second unit for four games now. Streit, a little known commodity in his second season with the Habs, is also captain of the Swiss Olympic team. He has adapted well to the new challenges - he had assists on both goals tonight. The Canadiens are in the enviable position of having eight NHL experienced defenseman at the ready - dressing seven while sitting the vowelly challenged Janne Niinimaa.

It comes in handy - Sheldon Souray left tonight's game with an apparent wrist injury 11 minutes into the third period.

Radek Bonk had a miserable game in the faceoff circle with only 1 win in 15 draws by the end of the second. Well below his standard sub-standard.

Michael Ryder continues to impress despite missing a bevy of great chances. Ryder is starting to create more opportunies for himself due to an increased ability to stickhandle in tight spots. His biggest detriment has long been puck work in traffic and passing quickly. He has obviously been working hard to fix this failing in his game. Noticable improvements have resulted in seven scoring chances against the Islanders in the previous game as well as on the goal he scored tonight.

Before Souray left the contest, he scored his 11th goal and 9th on the PP by duplicating the goal he scored on Ryan Mller two weeks ago. With available room from the point, Souray eased closer to the net before drilling an unexpected wrister over Miller's shoulder.

His loss, if lengthy, will be a tremendous one to the Habs PP.

Not to harp again on today's wacked NHL, but the Habs gained distance on the Sens and Leafs tonight due to waiting until the shootout to lose. Toronto and Ottawa lost in regulation time, putting the Canadiens up a point.

I'll stop at that - no need to get myself going on it again!
I don't even want to discuss the shootout