Things are now looking quite grim these days in the Battle of Ontario. Injuries on the Maple Leafs and Senators front could well shape the course and final outcome of already bleak campaigns.

News that Michael Peca is out for 3 to 4 months doesn't better the Leafs slim playoff hopes. Jason Spezza, a notoriously slow healer, will also be lost for a month. While the Sens looked good beating the hapless Flyers 6-3 tonight, don't expect that trend to continue. Spezza is the hub of all things offensive in the nations capital, and the injury is a devastating blow to post season goals.

It remains to be seen, how ownership of both teams will deal with the off season misteps of GM's Ferguson and Muckler, in regards to how these injuries have straightjacketed their chances in mid season. Both overspent, and spent stupidly, while overrating their respective clubs. Neither have the benefit of calling up players from the minors who could make one iota of a difference.

While Ottawa panicked and traded for little return, Toronto paid lucridous dollars to strengthen a position they felt needed reinforcement - defense - and the Leafs D still sits with the rats in the cellar. The Senators overpaid and gambled at a position they already found steadiness in - goaltending. Turns out it was close to 12 million for bad backup goaltending.Both left themselves little manoeverability come injuries.

In each city, worst case scenarios were foolishly never planned out. The NHL's newer realities are making them well aware of today's blindspots.

Maybe a coach and GM's salary ought to count against the cap!

With the trade market dryer than ever, there is little help in sight for either, but to turn inward to team character. A snowball's chance in hell never looked so bad!

NHL prefect of discipline Colin Campbell got it all wrong again in the Scott Nichol suspension. He completely overlooked the deed committed by Jaroslav Spacek on the play. Nichol received a whopping 9 game banishment after Spacek clearly used his stick to trip his opponant into a welcoming crossbar as he followed the play to the net. They each deserved five games....Campbell will never achieve the integrity of the position until he learns it takes two on occasion...Ken Hitchcock (Columbus) and Denis Savard (Chicago) are looking like hockey guru's compared to John Stevens (Philadelphia) and Andy Murray (St. Louis).Bad news for all, they will play no more than 82 games this season....You got to feel for Peter Forsberg. No one plays harder, and no one falls harder than the injury prone Swede. He has backbone to spare, just no spleen to speak of....Mario Lemieux has sadly run out of time and answers in Pittsburgh. My question is why doesn't he just commit to owning this team with such a bright future. Sell them, if he chooses, during a great playoff run...The NHL is back to talking about those bigger egg shaped nets that were a disaster in a Ricco Cup tryout in pre-season. Why not smaller pucks? Why not strap a Le Goalie to the posts? The NHL, I'm beginning to understand, is run by gamblers.... speaking of which, why Las Vegas as an NHL destination? What other sport made a boom there recently? Would Rick Tocchet be allowed to coach there?...Is December 23rd an NHL twilight zone date or what. The Montreal Canadiens haven't won on the day since 1945. Tonight the Ducks were shutout by Phoenix and Michael Tellqvist and the Sabres were beaten by the Blues. Ban this date from the schedule forever....Rory Fitpatrick, without a single point in 19 games, is second in All-Star balotting. Doubt the power of the internet still? Next year Sergei Zholtok could be a starter! 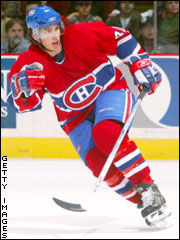 One has to wonder if the depleted Ontario teams managed any envy towards the Montreal Canadiens this past week. The Habs became pressed for roster and cap room, and sent impressive rookie Maxim Lapierre back to the minors. In four wins, the homegrown talent had 3 goals and an assist while being a plus five on the 4th line no less. The center is merely fourth in team scoring in Hamilton. Within a week, a province and media was behind him, before the cap concious Habs sent him back. Depth is jealousy in the new NHL. There is no cap in the playoffs. Lapierre is surely circling calandar dates.