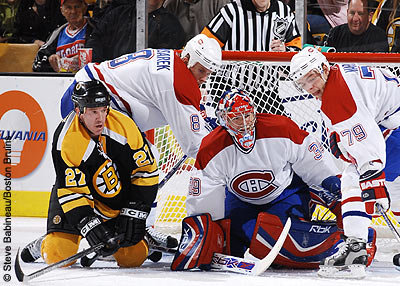 I decided to do something a little different tonight with the game recap. I thought I'd try my hand at some live journal note taking during the game. It's not a simple as when I do Poke Check's games and turn them into summaries, of course. With much more going on at a faster pace, it's a hectic endeavor I likely won't attempt again anytime soon.

Games on the eve of Christmas always seem to lack focus and concentration. It's like everyone has half their minds elsewhere. Tonight was no exception and the officials went along for the ride. The whole mess was weird and infuriating as I had the impression I was watching another team play in the Habs jersey's.
Nothing was pretty about this game. It was entertaining, in a twisted way.

Montreal has not won on December 23 since 1945, an almost hilarious stat. Think about it, a 61 year drought on the day!

The game started out well for the Canadiens and they forced Tim Thomas into making some great saves right off the drop of the puck. He stoned three good Habs scoring chances before the Bruins managed a shot on Huet.

The Canadiens goalie unravelled just as he did last December 4th when the Bruins again won 6-5. That had been the Habs last regulation loss and Huet was pulled after the 4th goal.

Tonight, his own team gave him headaches!

Zdeno Chara scored first for Boston on a blast from the middle of the blue line. It was tipped in expert fashion directly in front of Huet by Francis Bouillon, who played it like he was receiving a pass. Chara still reminds me of a big monkey on skates. He doesn't appear as smooth and relaxed when he was effectively paired with Wade Redden in Ottawa.

Chara's shot was the Bruins first of the game, at the 8:29 mark.

On the second Bruins goal, Craig Rivet entered the nights twilight zone by getting slashed near the eye. There was no blood and no acknowledgement by the officials. Rivet was essentially taken away from the play just long enough for his open man to pop one in.

At this point I began taking note of the many missed calls by the referees. I gave up soon thereafter - there were too many blind mice on the ice to continue counting. I'll make note of the most glaring fouls untouched - but I could do a whole post.

Koivu and Glen Murray got into a little leg chopping and tusled to the ice. Murray started it, Koivu tried to finish it and dumped him to the ice. Higgins came to the good captains rescue and piled behind Murray, trying to pull him back. While Higgins was down, Paul Mara skated in and began hitting Higgins (a good four punches to the head that Higgy didn't even seem to feel) before the refs pulled them apart. The zebra's had a tough time of it - it took way to long to separate the tuslers. Koivu and Higgins each got 2 for roughing, with no slashing calls handed out and nothing for the extra shinanigans.

Komisarek made it 2-1 on a point drive that looked to be deflected by Bonk in front of a screened Thomas.
I always have to laugh when the Habs play on the road. I always watch to see if the television crew picks up the mic sounds from ice level. Sure enough, TD Banknorth Garden does have the in-boards mics that let you hear each bodycheck as if they were body slams on the WWE. Neater is hearing the skates and shots way louder than normal.

Bonk looked to tie the game up early in the second but the goal was ultimately disallowed. I say ultimately, because no calls were made on the play. With Alex Kovalev being showed twice before falling over Thomas as the shot beat him, every one looked towards the officials for an immediate ruling on the goal. None made any motion. No pointing to the puck in the goal. No waving horizontal arm signs disallowing the goal. No arms raised making a penalty call. Nothing.

The four officials then conferred and decided there was no goal. The referee skated to the time keepers bench where the annoncement was made. As the officials seemed still somewhat confused as to whether to start play, coach Carbonneau asked an official over for an explanation. While they spoke, the game announcers made the point that if Kovalev wasn't judged (penalized) to be interfering with Thomas, then what exactly is the reason for disallowing the goal in the first place. That's surely what Carbonneau was making a point of, as Kovalev was given no indication he was being sent off. To me, if that's the judgement on the play, all calls would immediatly be made. No point in having a referee conferance on it, it should be cut and dry. The official then handed Kovalev a minor for goalie interference.

It was almost like they went, "Thanks for reminding us, Guy!"

By the end of the period, the unglued Kovalev would take a total of 4 penalties. One was totally dubious. Wayne Primeau actually climbed Kovalev's stick and fell. The Bruins must be taking diving lessons from the Avalanche!

With all the calls, the Bruins took the play away from the Habs by being gritty, tenacious and downright scrappy. They clearly wanted this one more badly than the Canadiens did.

Montreal tied the game shorthanded when Koivu set up Ryder with beautiful precision on a 2 on 1 break. Chara stupidly chose to move to Koivu's side while his reach already had Ryder eliminated. I'm not sure why Ottawa misses this tower so much, each time I see him play, he's brutal.

Murray took another call, this time for tripping, and his victim twirled and twisted like loose bacon flaps in the wind - and he wasn't overdoing it either.

As Murray was being sent off, he knocked away the players dropped stick and shot the puck down ice. That should've been two more but the ref was finishing up his Christmas list and missed it.

Brutal could also describe Andrei Markov on the night. The usually solid D-man was off in every way possible on the evening. His passes were soft, if he didn't outright fan on them. He was out of position often, missing checks and scrambling back. He had a miserable time keeping the puck in the Bruins zone. In short, he had his worst game of the year. Then again, it was likely his only bad game of the year. Markov has been one of the Habs unsung revelations in the first 34 games, just not on this night.

Ironically, he was scheduled for one of those in between period interviews most players hate.

This is gonna be interesting, I thought - Markov is shy as hell and barely audible in a timid English. Two seasons back he could still not speak it. Holding the mic was a female host, the sorta hot Chantal Macabe, who proceeded to ask him the most simpleton of questions so that Markov wouldn't be thrown way off and start answering in Russian.

"Last season the Canadiens were fighting for a playoff position and this year they are one of the top teams.
What do you think is the difference between this year and last year?"

"We are better", said Markov. I was almost rolling on the floor. That's exactly the answer the question deserved!

"We are playing more like a team", he added, looking almost stupefied.

"Many of us think you belong in the All-Star game", she said to a still stupefied looking Markov.

"Thanks", he said. He actually blushed. He probably knew he was having an off game.

"Do you ever think about playing in the All-Star game?"

"Not till now". Here I realized that stupefied is the actual normal look on his face. He has these constantly upraised circular eyebrows that make a frown virtually impossible. Add that to his plunger shaped lips and you have a face that is pure bemused.

But he's a great D and I love his play. Just not tonight. He might have fretted over the interview so much it got in his head during the game, who knows?

Starting the third I began paying a lot of attention to the Bruins system. Coach Dave "Hitler Moustache" Lewis has the players running basketball type pics to impede the motion of every puckless Hab in the neutered zone. It's one sneaky trap and it works because all contact with players is avoided. Only thing is, it's totally obvious. It's not easily defendable and for the most part went completely uncalled. I have an ingenius word for it - interference.

The Bruins parlayed this system to perfection frustrating the Habs to no end.

Chasing a player to the boards, Rivet caught a rut and dropped to the ice. The player he was pursuing fed the puck to Milan Jurcina at the point and Rivet arrived back in front of his net just in time to have it glance off his skate. Man when things go wrong!

Chistov put the game away with a nice deke that left the usually cool Huet steaming. He slammed his stick on the crossbar in frustration. Huet had 3 shutouts against the Bruins last season. Won't happen this year!

It finished 4-2 Bruins with a little late scurry by Montreal to make it almost interesting.

The Habs best guy tonight was Bonk, the worst far and away was Sergei Samsonov, who is completely useless without the puck and even more worthless with it. Someone change his address, please! He deserves his own suckometer, in the WFS tradition.