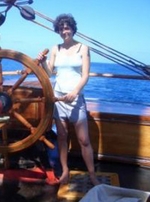 The search for Laura Gainey, the daughter of Montreal Canadiens GM Bob Gainey, has reached a ctritical stage two days after she was washed off a tall ship from Nova Scotia, rescue officials said Sunday.

On Sunday, the hockey club identified Gainey, 25, as the woman who was swept of the deck of the Lunenberg-based Picton Castle by a rogue wave during s storm Friday night. The vessel was en route to Grenada when the accident occured about 760 kilometres southeast of Cape Cod Mass.

Her father, Habs legend Bob Gainey, has been GM of the hockey club since May 2003.

Canadian and U.S. coast guard vessels and a merchant tanker have beeen combing an area of more than 1,900 kilometres.

Gainey was not wearing a survival suit or like jacket when she was swept overboard at 9:30 pm Friday night.
The U.S. coast guard estimeted Gainey would be able to survive 36 hours, based on factors that include her age, her physical fitness, and the water temperature of around 22 C.

The crew threw her life jackets and rings. 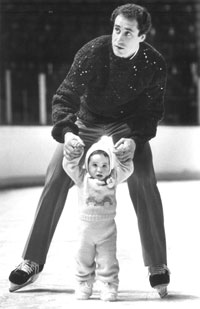 Daniel Moreland, the senior captain of the Picton Castle said it was too early to give up hope.

"The water is warm.There's reason for hope", he told the CBC news on Sunday from Mahone Bay N.S. where he has been following the search.

"There are many cases of people being in there a long time as long as it's warm, so we are going to keep the search up."

Moreland said that as soon as gainey hit the water crew members threw over rescue gear to mark the site and help her keep afloat. The captain said that it was pitch black at the time, making it almost impossible for the crew of 29 to see her.

"There's a lot of debris, a lot of life rings, ten or more life rings and life jackets that would have been throw at her", he said.

Gainey is a volunteer on the vessel and is known to be a good swimmer, very fit and is a "well loved crew member", Moreland said.

The Montreal Canadiens issued a statement Sunday saying assistant GM Pierre Gauthier would assume team duties as Gainey and his three other children, Anna, Colleen, and Steve, await word on the search. Laura Gainey's mother Cathy died of brain cancer at age 39 in 1995.

Meanwhile the coast guard said Sunday that the search is at a crucial stage. Petty Officer Larry Chambers said that an American C-130 search aircraft returned to the scene, relieving the crew of a Canadian C-130 that had searched through the night.

The tall ship was four days into a trip to Grenada, travelling along the gulf stream, when it encountered bad weather. Moreland said by all accounts Gainey was where she should have been on the vessel, seeking shelter from the storm.

Bob Gainey learned the missing woman was his daughter on Saturday. He attended the Canadiens 3-2 shootout loss to Buffalo on Saturday night at the Bell Centre. Players and coaches had a day off Sunday and were not available for comment.

The team said the thoughts and prayers of the entire Montreal Canadiens organization are with Mr. Gainey.

(RC-Note: 24 hours later, the search for Laura Gainey has intensified. A 2,400 square kilometre zone has now been covered. Searchers are aware of the approximate location of her fell due to floating life rings thrown overboard. The overnight search included the use of infra red heat detection monitors to assist crews during darkness. There has been talk of adding more ships to Monday's search efforts. Officials spoke of continuing to searching all through Monday before re-evaluating the situation. One official said that anything was possible in such warm water conditions - he has seen people survive the waters for days.

In this mornings Sun media papers, Al Strachan wrote a heartwrenching piece on the tragedy, as he has known the Gainey family for years. It was quite touching and has moved me to post it later on tonight. I'm sure that if it is online, it could be found with the searchwords "Strachan, Gainey". Check back towards the evening when I should have it up here.)

A memorial site in honour of Laura Gainey has been set up at www.lauragainey.org/. Beautiful words and tributes or thoughts and condolences are welcome.