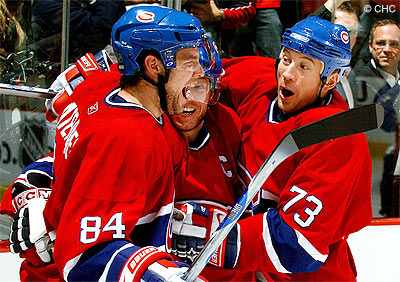 From out of nowhere, a week away from his Hall of Fame induction, former Habs and Avalanche goaltender Patrick Roy just missed a good opportunity to shut up.

Roy's comments concerning Habs rookie prospect Guillaume Latendresse were completely off base and out of line - not that it was any of his business to begin with. But Roy will always be Roy.

Roy stated earlier in the week that if Latendresse were not a Quebecer, were he named Smith or Brown, he would still be playing junior hockey at this point. He summised than he made the team based on the media pressure extended by the Montreal writers constant coverage of every move Latendresse made in camp.

To recap, Latendresse was not given much of a shot at making the team when Habs coach Guy Carbonneau declared at the camp that their would be one spot kept open on the team for a rookie. Motivated, the 6`2``, 229 pounder proceeded to get better with each performance before leading the team in pre-season scoring.

One gathers this did not impress Roy.


One also has to wonder where Roy even comes into all of this!

After a little background digging, some Quebec City reporters are stating that a deal was in place that would have had the Drummonville team retaining Latendresse`s rights, trading them to the Roy owned and coached Quebec Ramparts upon him being sent back to junior. Roy`s comment came on the eve of Latendressse`s 11th game with the Habs, thus making him ineligible to return to the league.

Carbonneau, GM Bob Gainey, and Roy have complied twice in recent history regarding goaltenders belonging to the Canadiens organizing. It seemed bridges were being rebuild between the two factions whose ties were irreparably severed by Roy's famous outburst and trade to Colorado in 1995. Last season Roy took on Habs draft pick Cedric Desjardins based on a recommendation from the Habs. Roy returned the favor by allowing the 20 year old goalie to challenge and eventually take the Ramparts to Memorial Cup glory. This season, in a similar move, Roy has taken another Hab signing, goalie Loic Lacasse into the same picture. This only adds to the puzzling nature of the Roy blurb.

Latendresse, seemingly stung over the words, handled it all quite well after hearing of it after scoring his first career goal against the Oilers on Tuesday.

Canadiens head coach Carbonneau told the Montreal Gazette that Latendresse's heritage is not what has kept him on the team. ''It doesn't matter if he's Russian, Czech, whatever. He's earned his place.''

''I don't know why he's acting like that. I've never spoken to him.

''He should be delighted by the success of young Quebecers in the NHL instead of making stupid comments.''

But Latendresse knows there are no guarantees in this league. Asked whether replacing Chris Higgins for a month or six weeks would strengthen his confidence, Latendresse said: "It's an opportunity for me, but we're a better team with Higgy in the lineup. But if I don't play good, I'm going to go back to the fourth line and somebody else is going to take my place."

Latendresse has a burden no other player in Canadiens history has had to bear. Other than the short-lived success of Stephane Richer 20 years ago, the Canadiens have not had a bona-fide French-Canadian offensive superstar since Guy Lafleur retired. (They had Pierre Turgeon and Vincent Damphousse for a time, but both had success elsewhere and neither came from within the Canadiens organization.)

Under the circumstances, Latendresse is handling himself well. He is doing interviews every day in French and English, he has the RDS cameras on him constantly, and he is gaining confidence on the ice.

Sounds like a young man who is going to be here for a while.