Share All sharing options for: Roy - Latendresse: Round Two - Shut Up Finally 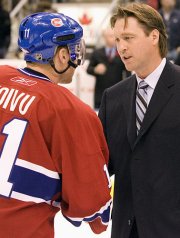 Former Habs goalie and current Quebec Ramparts coach Patrick Roy offered an apology Saturday morning to the Canadiens director of communications, Donald Beauchamp, after acuusing him earlier in the week as to the content of comments he made regarding Habs rookie Guillaume Latendresse.

Roy, who will be inducted into the Hockey Hall of Fame on Monday, phoned Beauchamps to explain himself in regards to his opinions, which touched off a media storm in Montreal during the week. Roy had even gone so far as to suggest that if antone were to lose their jobs over the incident, that it ought to be Beauchamp.

It had been reported that after the Remparts 9-3 win over the Rimouski Océanic on Tuesday, Roy explained his lateness for a post game press conferance by jokingly stating that he was tuned into the Canadiens highlight reel after the win over Edmonton upon hearing that Latendresse had scored his first NHL goal. Roy threw fuel on the fire by adding that the goal signified that Latendresse had finally touched the puck.

No word on what the always quotable, never misquoted Roy said to Beauchamp. The tempest in a teapot story was somewhat tempered by Roy in another paper, when he explained that he felt the NHL was rushing many a junior aged player into the bigs as a measure against the salary cap. His explanation for his rant was that he saw these moves as being not in the players best interests.

Roy shook captain Saku Koivu's hand during ceremonies for the Habs-Leafs Hall of fame game on Saturday. Koivu probably wanted to cock him a good one. Roy was accompanied by the other inducties including Harley Hotchkiss, Dick Duff, and Dan Brooks, son of the late Herb Brooks.

Latendresse did salute Roy as he made his way onto the carpet by slapping his stick hard on the ice.