Patrick Roy Induction Speech: Inside The Heart And Mind Of A Driven, Persevering, Warrior

Share All sharing options for: Patrick Roy Induction Speech: Inside The Heart And Mind Of A Driven, Persevering, Warrior 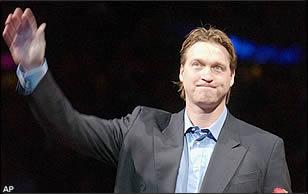 Upon hearing Patrick Roy's induction speech into the Hockey Hall on Monday, I was disappointed and not totally surprised, that he chose to convey the majority of what he had to say in french. Disappointed, because it was an impassioned look into himself, that would unfortunately pass by those unable to understand it. Unsurprised, for Roy was never quite at ease pouring his heart out in English, and remained linked to his province, being back in Quebec City, ties to his junior hockey team and all.

An intensly proud man, Roy felt it only natural to be himself in his moment. Some would call it crass, some would term it class - not a word associated with the man often enough. In the coming years, when European and Russian born stars make their way into the Hall, we may be treated to Swedish and Slovakian interpretations, who knows?

After having heard Roy's words, I wanted to hear them again, or at least read them. That led to the idea of transcribing it if I were to get my hands on the script. I did a few searches in that regard, coming up emptyhanded, save for some bits and pieces. I'll admit, I'm a pretty lazy Internet search - If i don't find what i'm looking for in a couple of hits, I'm outta there!

I had a longshot brainwave idea that I thought stood a chance. I e-mailed the Quebec Remparts site asking if they would be able to point me to where it could be found. Using my best french grammar, I explained why I was asking for it using the language sadness angle while commending Roy's bristling career review. I doubted the chances of it working, as my french writting skills would hardly impress a native Quebecer. I've always been proud of my bilingual abilities while knowing their limitations. Like a frenchman speaking english, it is just as easy to place one word erroneously and alter the meaning of what you want to say. I knew my quest was far from a sure thing when I sent the e-mail Tuesday at noon.

Late Tuesday evening, I received a reply from a woman named Lucie Cloutier, who is in charge of the Remparts public relations. She thanked me for my kind and thoughtful words while telling me they themselves would post it on their site in a matter of days. I was a little blown away, to say the least!

Here is Roy's "discours", as they say in francais!

Ladies and Gentleman, and dear friends in hockey, good evening!

I would wish to start off by thanking the members of the selection committee for this greatest of honors. I would also like to take the opportunity to congratulate fellow honorees, Dick Duff, Herb Brooks, and Harley Hotchkiss, on their induction this evening.

While it doesn't seem all that long ago I was hitting the ice for my first NHL game, I realize tonight what a long road it has been.

A road filled with challenges, hard work, and perseverance, but also filled with profound friendships, teamwork and togetherness.

It's a road lit by a passion and a thirst for winning that still burns stringly inside of me today.

My journey through the NHL, with Montreal, and then Colorado, is loaded with special memories and emotions.

My first memory goes back to when I was about 8 years old when my parents brought me to the arena for the first time. It was then, that I started believing in my dream: becoming a professional goaltender in the National Hockey League.

It was at that moment that I chose to dedicate myself entirely to it, gaining inspiration from the likes of Daniel Bouchard and Rogie Vachon, while every ounce of my heart, my guts, and my passion.

I dreamt of this league where only the best played!

I dreamt of being one of its stars and being a winner!

I dreamt of playing alongside the game's greats!

I dreamt that my talent, my inner strength, and my never ending desire to win, would rock hockey fans!

Today, when I look back, I feel very lucky to have been a part of the National Hockey League and to have played in the best possible conditions on teams such as the Canadiens and the Avalanche. I sure do remember the pain, the sacrifices, the discipline and the efforts…

But I also remember partnership, friendship, and mostly, the awesome feeling of being part of a team.

I remember that it was our thirst for winning that made wins possible. There is no sensation quite like being on a team whose mission is to go for the Stanley Cup.

Hockey taught me discipline. It also taught me to believe in my dreams, to go for it and to never give up.
Tonight, I feel very lucky to have been supported by many people who have believed in me, and I would like to take a few moments to thank them.

Had it not been for my mother and father, who believed in me and backed and supported me in every way when I was filed with ambition...

Had it not been for my children, Jana, Frederick, and Jonathan, in addition to their mother. who enabled me with the freedom necessary to reach this day...

Had it not been for my agents, Robert Sauve and Pierre Lacroix, and their advice and guidance in my time with Montreal and then Colorado...

Had it not been for team mates, with their constant support and confidence in me...

Had it not been for opponants, who defied me to continue to surpass myself...

Had it not been for the coaches who taught me to persevere and become consistant, and who knew the ways in which to bring out the spirit which brought out the best in me...

Were it not for hockey's ardent fans who love and cherish the game...

Were it not for hockey itself, the most exciting sport in the world...

I'd never have had the joy of travelling down this cherished road, to stand here today before you, receiving this honor and these tributes on a night I will never forget.

Thanks to Adam Foote, my friend, my roomate during 8 years and probably my best English teacher. (Maybe I should have played longer!)

Thanks to Ray Bourque, who inspired, not only myself, but an entire team, to surpass themselves in our Cup win in 2001.

Thanks to Mike Keane and Pierre Turgeon, who I became great friends with.

I am very proud, and would like to make special note of the presence tonight of my sister Alexandra, and my brother Stephane.

I had often heard that I was compulsive and had a hard head. Today, with hindsight, I'd term it as empassioned and driven, a warrior who welcomed a new challenge.And doesn't a champion have to step out of line every once in a while?

I have also been credited with inventing the butterfly style of goaltending. Not true! That style existed well before. With the dogged dedication and vision of Francois Allaire, I was able to perfect and advance it.

Today, it makes me feel extremely proud to see the many up and coming goalies that will use this for future generations.

To all the younsters of today, dreaming of one day being in the NHL, I want to take this moment to urge you to believe in yourself, to persevere, make the best of yourself in pressure situations, and surpass yourselves.

Nobody will be a champion without efforts. Nobody will become a winner whitout discipline, faith and passion.

Each day, as a coach, I see talent on the ice.

Each day, I see young players who remind me of myself, who have a burning desire and a profound respect for hockey.

Tonight, I'd like you to grasp and retain one word, a word that guided and led me all down this road, each morning when I laced up my skates:

It's up to you to draw the most from the passion that encompasses you, and transform it into unforgettable experiences underlined with success, challanges, friendships, and lessons in life.

Finally, I would also like to congratulate my colleague inductees and award recipients, Herb Brooks, Dick Duff and Harley Hotchkiss.

After hearing and reading this, much of what was always misunderstood about Patrick Roy, seems alot clearer.