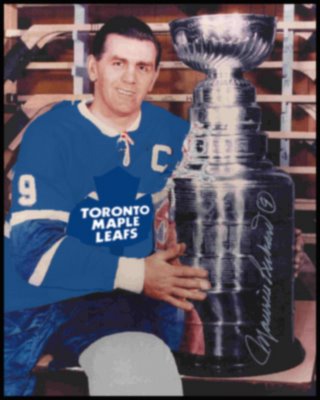 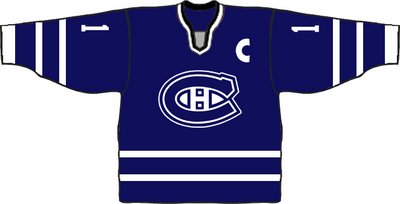 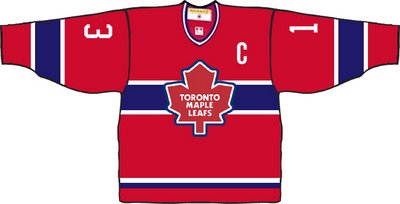 Blogger Ingmar Berman, Sweden's only St. Louis Blues fan has commited virtual suicide. Bergman, a well-known photocrop expert has done the equivalent of placing the head of Jesus on the body of Saddam Hussain in the ultimate NHL sacrilege.

As you can tell by his creations above, Bergman will be a wanted man, that is if he isn't drawn and quartered as of this posting. Ingmar was last seen fleeing on a dogsled in the direction of the Swiss Alps. The dogs were later found wandering aimlessly throught the winterland mountains with no Ingmar in sight. When questioned on Bergman's whereabouts, one Husky began wimpering before stopping to lick his gonads. Trackers are still on the case.

Bergman began receiving threats after he posted the blasphemous Original Six jersey with logos reversed for each. The taunting must have spurred him on. Sadistically, only days later, he created and posted the now infamous Rocket with the Stanley Cup in a Leafs Jersey. Funnily enough, Habs fans weren't offended, and simply chose to laugh it off as the sad dreams of a disheartened Leafs supporter. The entirety of the wrath apparently comes from Leafs nation, who were most upset by the off-colour jerseys. Some, it is told, did not appreciate the cropping of a French socialist into the blue and white Buds duds.

While it was first assumed that this would hardly affect the molecular construction of the average Leafs fans brain, those views have been cast off by the investigative branch of the RCMP, in tandem with Swedish government officials.

RCMP constable Harry Stoggies strode down Young and Bloor streets in Toronto this morning accumulating general opinions on the prints.

"Most folks bitched about the colours," said Stoggies, who added "Some asked that I cover Richard's face before it started a riot'.

As for the pictured Stanley Cup, Stoggies went on, "None even recognized it, except for one old-timer who squinted and gave it a second look, seemingly disturbed".

The RCMP ask that if Bergman is in fact still alive and well, to contact the offices of John Davidson, GM of the Blues. "He has a basement apartment for him at a secret Missouri location next to his mother's house," says Stoggies.

"Hopefully, he does not call John Ferguson, Jr. by mistake!"