Share All sharing options for: Gui Gets Two As Sens Come Unglued 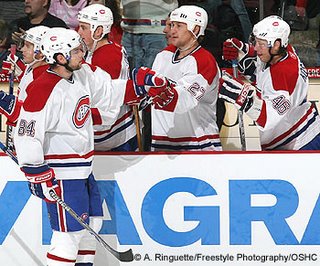 After a lacklustre (a generous term for dreadful) game against the Leafs on Saturday, the Habs bounced back tonight against the porous (an oblique reference to sucking) Senators with a 6-3 win at a Scotia bank place filed with Canadiens fans.

Ottawa put up a decent fight for 30 minutes, giving it what I truely beleive is just about all they've got, in a pretty rugged game. Eugene Melnyk is proving himself to be the most patient of owners while this team digs itself into a November playoff crevis they will be hard pressed to crawl out of. Many still believe the Sens can still turn it around. They won't find evidence to back that claim in this game.

On the Habs side of things, the were led by solid goaltending from Cristobal Huet, especially while the Canadiens were outshot in the first period. As I see it, he is slowly wrestling the starters job away from Aebischer as contnues to resemble his last year's self more and more while string together consecutive strong performances.

Latendresse got his first two goal game while looking comfortable on the top line and Mike Komisarek was +4 while being almost dominant on the ice in both ends. In the first Komi flattened Brian McGratton face first in the glass, leaving the goon slightly dazed on the ice. While the play was not called, it clearly should have been. McGratton rose from knees after a good ten seconds passed and charged at Komisarek, all the while being held off by a linesman during a viscious struggle which earned him a ten minute misconduct.

Word of warning to the rest of the teams, referee Ian Walsh is garnering a rep as the most incompetant and inconsistant ref out there. This is the 4th time I watch him in games involving Montreal, and he is totally out of control. His calls tend to go to one side periods at a time, he hands out unsportsmanlikes way too easily, and spends the third evening his calls once games get out of reach for the team trailing. He also misses tons of stuff along the way while being completely oblivious to the leagues crackdown on obstruction fouls. I won't itemize where he has steered the Habs in certain games, but be forewarned - Ian walsh is a nightmare coming soon to a rink near you.

Back to Komisarek, following his play on McGratton he had a great PK sequence where he stripped the uninspired Alfredsson of the puck twice as the Sens captain came over the blue line, turned the play down ice with Tomas Plkanec two on one, and headed straight for Martin Gerber to redirect the feed five hole for his second shorthanded goal of the year. Quite a play - unthinkinkable that Komi would outhustle Alfie!

Comments by the Sens after the game reek of their defeatist attitude. Jason Spezza actually found positives in this game. He'd make a shrink rich with statements like, "It's not as good as we want, but at least it's getting better. If we had the answers we would definitely solve the problems."

Reminds me of that great Barenaked Ladies lyric, "If I had a million dollars, I'd be rich!"

Spezza, one of the game's deep thinkers!

The answers Jason, are intensity, commitment, and perseverance, in that order. Get some!

In Poke Checks school there is a program called "Spelling With Spezza" - it is a spelling bee type promo in which the winners get Sens tickets and meet with him post game. If she wins, I'd love to take her - just to hear her ask him "What does B-A-L-L-S spell?

It would be priceless!

Having a coach who continuously provides the bleariest of silver lining excuses in the face of embarassing defeats in the guise of protecting his players and his own incompetance, surely doesn't help. Bryan Murray had this beauty to offer on the state of his goaltending, "The guy gave up five goals and he gave us a chance to win the hockey game. That's the way I felt about it. That was as strong a game as he's played for us. He made huge stops in a couple of cases".

He should have said, "Gerber let us down big time, when it was 4-3 in the middle of the third. An NHL goalie simply does not let in a 30 foot Mike Johnson shot when the game is on the line!"

Perhaps Melnyk's biggest problem in figuring out how to disassemble this mess is where to start. Do you address the teams lack of grit and passion? A GM hellbent on finding excuses to his lame deals that have watered down the lineup? A clueless coach with no system to preach and no track record to back it up? An uninspired captain with a "Trade Me Please" sign on his back? A goaltender who winces and blinks under pressure?

Maybe Melnyk ought to own up to not doing what it would have taken to get Zdeno Chara resigned in the off season. Chara was evidently the glue that kept this team together, and the Sens screwed up big time in not identifying that fact.

As Habs D Craig Rivet said on Sunday, Chara WAS the Senators!

A final note on Ottawa. It's got to be damn annoying to play in a building where the visiting teams fans outnumber yours. It has always been my theory that Senator fans are comprised of former Leaf and Hab supporters whose allegiances have never been totally cut off. I saw proof tonight. Even Montreals hit were fervently cheered. Ouch!