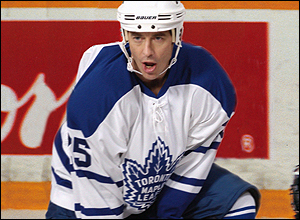 (RC Note - This is taken from this link. The title is mine, but I otherwise haven't changed a word! Honest!)

TORONTO (CP) - It's time to start laughing about the Maple Leafs. (Ahahahahahaha!)

The team and the NHL have given permission for their logos to be used in a movie called "Breakfast With Scot." The producers call it "a thoughtful comedy," about a gay ex-Leaf and his partner, the team's lawyer, whose lifestyle and relationship are turned upside down when they become the guardians of "a budding queen of an 11-year-old boy."

The movie stars Tom Cavanagh of "Ed" and "Scrubs," and Ben Shenkman of "Just Like Heaven" and "Angels In America" star along with Noah Bernett of "Gothica."

Laurie Lynd is directing Sean Reycraft's script based on a Michael Downing novel. Miracle Pictures and Capri Releasing are behind the project.

The 25-day shoot in and around Toronto is slated to end Dec. 15.

NHL, Leafs give flick full supportDue out in theatres next December

The appearance of the first gay Toronto Maple Leaf will be groundbreaking, even if it is only in celluloid.
Actor Tom Cavanaugh plays a gay ex-Leaf in a comedy film Breakfast With Scot currently being shot in the GTA and Hamilton. He's one-half of a homosexual couple — his partner is the team lawyer — whose lives are turned upside down after becoming guardians of Scot, "a budding queen of an 11-year-old boy," according to the storyline.

What makes this movie even more unique is that the NHL and the Maple Leafs — part of a sport where no player has ever come out of the closet — have given the filmmakers their blessing to use their logos and uniforms. The Leafs have even agreed to let them do some filming with them at the end of a practice next month.

Cavanaugh, a huge hockey fan who was born in Ottawa, admits to being shocked they got the go-ahead from the league and Leaf brass. He vividly recalls his first thought when he read the script a year ago and saw in the opening scene that his character, Eric McNally, was a Maple Leaf.

"I never in a million years thought when we finally went to shooting we'd be donning Leaf sweaters," Cavanaugh said yesterday. "I thought it'd be that thing where it's the Toronto Razorbacks or whatever. There's something instant to the viewer when you put on a Leafs jersey or any Original Six jersey.

"It's harder to tell the story asking the public to remember this is supposed to be the NHL, even though we have to call it the NHA. You have to give full credit to the NHL and the Leafs for signing on. It also shows the possibility for if someone were to come out, perhaps it wouldn't be as big a deal as we think."

That remains to be seen, of course.

Leafs general manager John Ferguson, for his part, said it wasn't hard for them to give the project the go-ahead after it got the green light from the NHL, which had screened the script.

Click here if you really need to read on!