Best Goalie In The NHL!

Share All sharing options for: Best Goalie In The NHL! 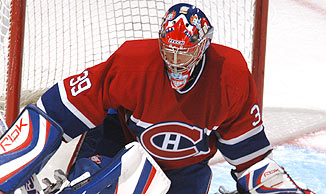 If there are any remaining doubters, they are fewer!

Cristobal Huet is the best goalie in the NHL. With stats to back his stature, no one can make claims otherwise.

After posting tonight's shutout / shootout win over the Panthers, Huet's lofty stats now sit at the top of both meaningful goalie categories. He leads with a .940 save percentage and a miniscule 1.94 GAA. He has 2 shutouts to go with his 9-2-2 won / loss record, and is unbeaten in his last six starts, in which he's given up only 6 goals. He has been beaten a mere 27 times in 15 starts this season.

One may tend to credit a tight Habs defense for the numbers, but it's hardly the case. Huet faces on average 30 plus shots per game. Due to the Habs water pistol offense since the loss of Chris Higgins to injury, they would not be in a position to win without Huet standing tall.

As steady as Huet has been between the pipes, he is sturdier between the ears. This is no Jose Theodore come lately I am talking about.

He goes about his business so sedately and robotic, he leaves interviewers wondering if they even have a quote. He's no spotlight hound, that is for sure. When asked about his play, Huet uses the word "I" almost hesistantly, quickly turning the subject to team play and efficiency. He seems completely unbuffed about raves going his way. The professionalism he exudes spreads a calmness over his team mates I've seen only in the likes of Patrick Roy, Ken Dryden, Grant Fuhr, and Bernie Parent. He's a winner. The hardware is only a matter in time.

While he may be heading for Vezina and possibly even Hart Trophy honours, there is little fear that he capitulates, Theodore like, into believing his press clippings or finding endorsement heaven in the media mad hockey mecca. Huet just doesn't seem interested in anything but his next game. In two seasons in Montreal, he has revealed little of himself personally. Last seasons winner of the Roger Crozier saving grace Award would prefer it kept that way.

Not bad for a throw-in from the Radek Bonk deal!