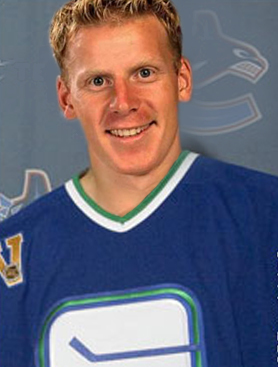 Whoa Nelly! I hope this isn't just another photoshop mockup. Could it be that rumours suggesting Canucks GM Dave Nonis wouldn't part with Jan Bulis in a one for one deal for Alfie be exaggerated? Would the Canucks immediatly hand him the "C" ? All these questions?


The sight of this just makes me ponder a wish list of top 10 photoshop creations I'd like to see and bloggers everywhere could eventually make use of. Don't take this too seriously!

Crystal ball vision of Alfredsson courtesy of Hodge at WFS.

1 - Pat Quinn behind the Senators bench.

2 - Tie Domi, who once belonged to the Predators for a day or so, in their mustard jersey - puking!

3 - Saku Koivu, with his head amputated, scoring the winning goal in the SCF.

5 - Bryan Murray doing a headlong swandive into a sump pump.

6 - Darcy Tucker and Belinda Stronach doing the Wango Tango in the penalty box.

7 - Martin Gerber's head on a block of Swiss cheese, with every sports ball imaginable in the net behind him.

9 - Bruce Garrioch giving birth to his own head, anally.